‘Blue Economy’ is a concept that can significantly contribute to the socio-economic development of Bangladesh. Blue economy concept has ushered in a new horizon for economic development of the coastal countries through utilising the sea and marine resources at national and international level”. -Prime Minister Sheikh Hasina 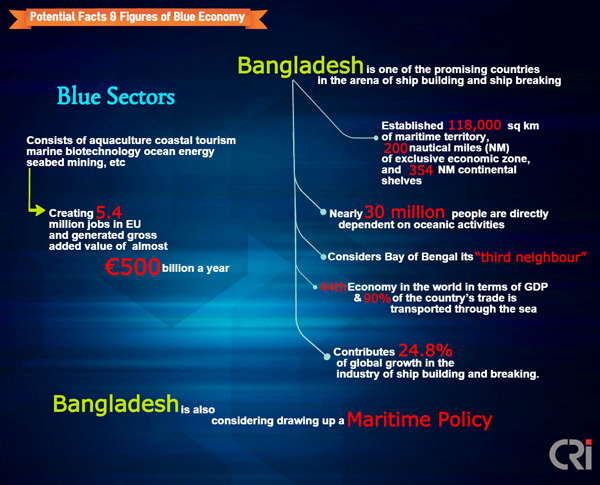 The decisive aim of the business model of Blue Economy is to transform the country from scarcity to abundance by tackling issues that cause environmental and related problems in new ways (Gunter Pauli 2010). The potential benefit of Blue Economy is to address economic problems with innovative solutions that are environmentally beneficial and which have financial and wider social benefits. Blue Growth is the long-term strategy to support sustainable growth in the marine and maritime sectors as a whole. Seas and oceans are drivers for the Blue Economy while technology and knowledge are the twin resources to take control over these resources. The ‘blue’ economy has created roughly 5.4 million jobs in EU alone and generates a gross added value of almost €500 billion a year. Blue sectors are numerous, consisting of aquaculture, coastal tourism, marine biotechnology, ocean energy, seabed mining, etc. i

In a developing country like Bangladesh, the role of marine resources in poverty alleviation, acquiring autarky in food production, protecting environmental balance, facing adverse impacts of climate change and other economic activities is unlimited. Alongside the existing land-based development activities, the marine-based economic activities/management of sea and its resources through Blue Economy may be considered as a new horizon for development of the coastal countries and the small island developing states. 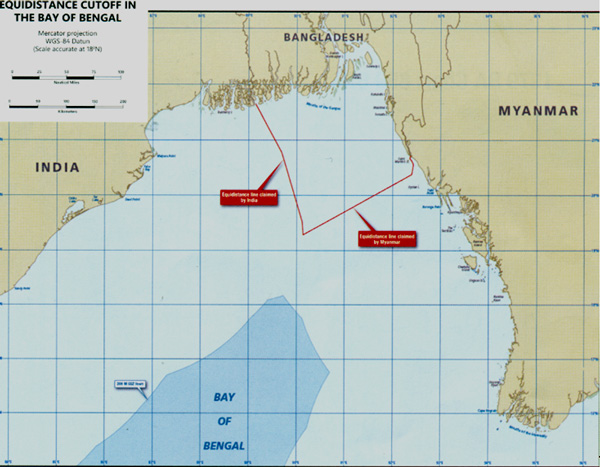 Dhaka established its sovereign rights through international court verdicts on more than 118,000 sq km of maritime territory, 200 nautical miles (NM) of exclusive economic zone, and 354 NM continental shelves from the Chittagong coast. It has raised hopes of extracting “plenty of resources” from the Bay of Bengal, considered by Bangladesh as its “third neighbour”. Bangladesh, which lacks expertise and technology to exploit the resources, will seek global partnership, particularly from neighbouring countries.

The peaceful resolution of maritime discords has opened a golden opportunity for Bangladesh to explore and exploit the vast resources in the Bay of Bengal. ii

Bangladesh, which lacks expertise and technology to exploit the resources, will seek global partnership, particularly from neighbouring countries. Bangladesh is also considering drawing up a maritime policy.
There is no doubt that sea-related subjects like expansion of international trade, use of marine mineral resources for long-term energy security, proper management of marine fish resources and protecting marine environment and bio-diversity would determine Bangladesh’s future development and economic growth.

Bangladesh’s recent activities to enlarge the maritime economic activities assume significance as the substantial part of the country’s foreign trade is conducted through maritime shipping. Besides, Bangladesh is one of the promising countries in the arena of ship building and ship breaking. According to an estimate, the country contributes 24.8% of global growth in the industry of ship building and breaking. Some Bangladeshi observers maintain that in ports like Chittagong and Narayanganj, there are huge opportunities to expand the industry. iii

Bangladesh’s Strategy towards Blue Development
Considering vast multi-dimensional potentials of the Bay of Bengal, the Father of the Nation, Bangabandhu Sheikh Mujibur Rahman enacted the Territorial Waters and Maritime Zones Act 1974 to establish Bangladesh’s sovereign rights over the sea and its resources. Consequent to this some of the important provisions of Bangladesh’s Territorial Waters and Maritime Zones Act of 1974 were also included in the UNCLOS 1982. Especially the articles 7(2) of the UNCLOS on deltaic base line for highly unstable coastline were incorporated due to insistence of Bangladesh.

A huge stock of living and non-living resources is available under the seabed and water column. But we have a dearth of skilled manpower to ascertain the availability and explore the resources. Besides, there is also lack of proper technology for exploiting deep sea fishes and seabed resources. To build skilled manpower in these sectors, the country has taken steps to impart higher education on Oceanography at the Dhaka University and Chittagong University. The first National Oceanographic Research Institute’ is being established at Ramu, Cox’s Bazar to create a marine scientific community for research.

Nearly 30 million people are directly dependent on oceanic activities like fisheries and commercial transportation for their livelihood. Bangladesh considers Bay of Bengal its “third neighbour”. The Ministry of Foreign Affairs is about to draft a national maritime policy for the first time.

Bangladesh to work together for people-centric blue economy
Bangladesh wants to work together and move ahead with a ‘Bay of Bengal partnership for Blue Economy’ to secure sustainable development among the coastal or littoral states ensuring an inclusive and people-centric blue economy.
Foreign Minister AH Mahmood Ali while summing up the two-day international workshop on ‘Blue Economy’ in the city on Tuesday. He said there needs to have collaboration in research, observation and surveillance; and in respect of sharing of analyses, outcomes and observations. “And, such collaboration among countries must take place based on certain universal principles of engagement-mutual trust, respect, mutual benefits and equitable sharing of benefits,” said the Foreign Minister.

The Potential
History of development of many countries tells us that the countries which utilized the sea and its resources became economically more prosperous than others. Bangladesh should be of no exception to this development. Our international trade is totally sea borne. With 130 billion dollar GDP, Bangladesh’s economy is the 44th in the world in terms of GDP. Export earning surpasses 30 billion dollar mark. The total international trade comprising export and import stands at 65 billion dollar. With more than 6 percent GDP growth, Bangladesh’s economy is advancing towards a prosperous future. An increased export is crucial for economic uplift and growth. Today, 90% of the country’s trade is transported through the sea. iv

Now we should be more concerned to harness the new maritime territory. We do not have accurate information about the total stock of all resources we have in the Bay of Bengal. In 1975, FAO Consultant Dr. W B West conducted a survey which found that the Bay of Bengal had around 264,000 to 3,74000 mt tons of fish and 9,000 mt of shrimps. We need to find out and update the figures from newer surveys. v

There are about 435 species of fish available in the Bay of Bengal region. The total collection of fish from the Bay is approximately 6 million tonnes annually, but Bangladesh’s share in it is meagre 0.29 million tonnes. On July 12, Fisheries and Livestock Minister Mohammad Sayedul Haque met Director General of Food and Agriculture Organisation (FAO) in the United Nations, J D de Silva in Rome and urged him to include Bangladesh in FAO’s “Blue Economy Initiative” which is increasingly becoming popular across the world. vi

Beyond Fisheries
Besides fish resources, there are mineral resources in the seabed. Salt is one of the important resources that meet our daily needs. However, Bangladesh’s salt production has remained stagnant at 350 TH MT since 2003, as per United States Geological Survey (USGS) Minerals Resources Program (2009). Salt industries have been set up in the coastal areas and there are about 300 refining units. Production of industrial salt can be done using advanced technologies and eventually it can become an export product.

Other mineral resources beneficial to Bangladesh, as mentioned at the BoI seminar, are gas, copper, magnesium, nickel and precious metals, including cobalt. Like many developed countries, Bangladesh can also utilise the sea for producing renewable electricity. In addition, some industrial sectors such as ship-building and ship-breaking industries and pharmaceuticals can also benefit from the sea resources. vii