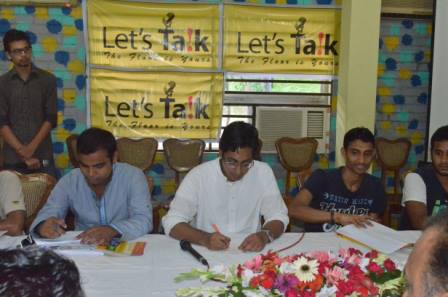 After successful completion of three Let’s Talk events, the 4th session was held at Dingi Restaurant, Dhaka on 21st July, 2013. Nahim Razzaq MP and Tanvir Shakil Joy MP, two youngest MPs of 9th parliament, were present at the event to interact with the youths present. The introductory session was followed by a presentation made by Centre for Research & Information (CRI).

In the spontaneous question and answer session, students asked about socio-political aspects and problems that they see in front of them and for the country. A student from UIU asked about the opportunities and availability of research funds in ICT sector. One participant, who is involved in farming asked about the fertilizer pricing issue and storage facility. Registration of Hindu marriage, women’s education, recent Hefazate Islam protest and condition of women’s rights were some of the topics brought up by the participants.

In response, the MPs stated that in agriculture, Bangladesh has been self-sufficient for the last two years. “We had 40 lac tons of food shortages when we came into power in 2009. Now, we have stock.” They added, “We have created employment opportunity. Under ‘One house, one farm program’ a lot of people have been employed. We have introduced allowances. During our 1996 tenure, we had a maternal allowance which was stopped by BNP in 2001. In 2009 we started it again. For people and mothers who got the benefits, AL government represents tenure of reliability.”
On the Hefazate Islam issue, they said the government won’t do anything out of the blue. “We are a democratic party. We will ensure rights of the people. We did what was necessary to do. The broadcasting of two channels was stopped as they did not follow regulation.”
About the proposed nuclear power plant deal with Russia, the MPs told the participants that it is the safest possible solution for Bangladesh right now. Coal and gas are not renewable sources of energy and sooner or later will run out. So, the government is looking for the best possible alternative options. They admitted that this government, just like all other governments of the world, did have some flaws, but they are still trying their best to ensure accountability.

Students praised the initiatives taken by the government such as e-tendering, e-postal system which has changed the scenario for many. Also they congratulated the government for achieving some of the MDGs. One participant pointed out that now his sister gets the books within the first week of January every year. He also praised the government for giving more focus on woman education.
Break was given in the middle for Iftar. Around 7:15pm the next session started where the MPs talked more about their measures and the students expressed their ideas for the betterment of the country. Some of the suggestions given by the participants were:
a) Effective traffic management;
b) Need to ensure parking of vehicles in designated spots only;
c) Ensuring coordination between different authorities about road management;
d) Ensuring that no digging of roads take place during the rainy season;
e) Detectors for food safety;
f) Sound pollution emanating from horns of large vehicles.
Tanvir Shakil Joy in his concluding remark urged the participants to do criticism of the government’s work in a constructive way because many of the MPs do work hard to ensure peace and prosperity in their constituency. He thanked CRI for organizing and the participants for their contribution in the event.