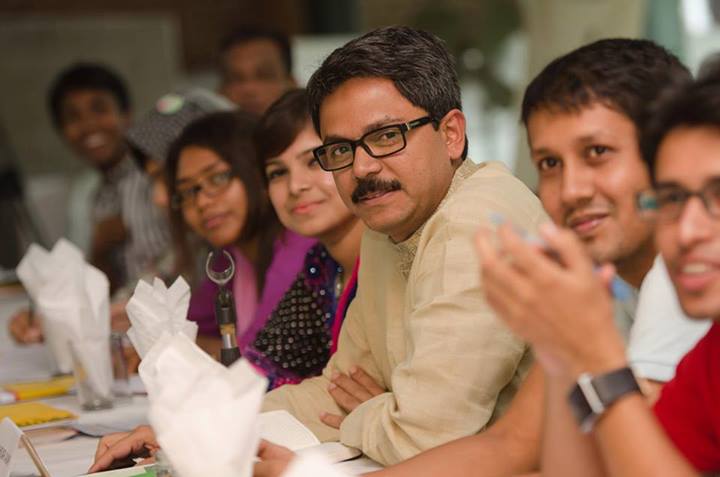 The fifth Let’s Talk session saw two parliamentarians, Shahriar Alam and Abdul Wadud Dara being placed on the hot seat ready to interact with the youths of Dhaka city. The event kicked off with an interesting icebreaking session. Instead of self-introduction, the two MPs introduced each other. And participants were given 2 minutes to know as many other participants as possible.

Event moderator asked the attendees to express their opinion about getting involved in politics-if they get the chance. Also they were asked to forward their questions to the moderator in written form. The youths emphasized on communication. According to them, information is there but not the medium to communicate. They expressed their frustration about and scope of politics in their life. They raised their concern whether the two parties will ever stop fightinh. Some even said they would like to create or join a 3rd power in politics. Also they want a platform without violence.

The moderator took this opportunity to ask Shahriar Alam MP about having a family background in politics. Shahriar Alam explained the whole scenario, based on ground reality. But he mentioned the process is changing within Awami League. Some of the participants, who study abroad were asked how the Bangladeshi politics looks from outside. Other issues which featured in the discussion include youth freedom, education and research facilities, internet price, caretaker government, minority rights, quota for government jobs, student body elections in different institutions and so on.
In quick comments, Abdul Wadud Dara MP informed the participants about a meeting of parliamentary standing committee which will be held within next few days to discuss the internet issue. In reply to questions raised during presentation, Shahriar Alam informed that from the solid wastes, 1MW electricity is currently being generated and it will be gradually increased. The participants again got chance to ask questions after the presentation.
Regarding environment, Abdul Wadud informed that the government is still to decide about Rampal power plant. Shahriar Alam added that the options that we use now for power generation are not feasible with respect of price, availability and size. So the only option left is nuclear energy. Foreign direct investment came up as an issue where the investor can take away his full investment. Why this is allowed to happen was asked by an attendee.
An attendee asked about agricultural storage facility and he told his own story of not getting proper price for potato cultivation. Shahriar Alam replied that there are agriculture markets now and government is currently doing crop mapping. About policy making and policy not being implemented, Shahriar Alam said that the government is focusing to make most of the policies ‘home grown’. Unfortunately, there is implementation problem.
A student from University of Dhaka asked about Hindu marriage registration. Both MPs replied that a law has been passed 2 weeks ago, to ensure registration. All the participants received the news with delight.

One participant expressed his anxiety about minority tortures all around country for the last 6 months. “We all know who does that. But we need to be patient. And those who are Muslim, should follow the right path of Islam. The ideology of Islam never preaches hatred.” The MPs agreed. And they ensured and pointed out necessary actions were being taken. About ETP for industrial factories, the MPs ensured that the monitoring cells are doing their job properly and are constantly penalizing industries which do not meet the environmental standards.
About hartal and caretaker government Abdul Wadud Dara MP brought up the reasons why there were so much hartals during 1991-1996. Shahriar Alam told-out of 400 days BNP was absent for 135 days in 1991-96, BNP 163 days out of 382 in 1996-2001, AL 150 days out of 373 days in 2001-06, BNP 282 days out of 337 days in 2008-2013 tenure. The students praised Prime Minister Sheikh Hasina’s eagerness to be in parliament. Also they praised the government for winning the Myanmar-Bangladesh maritime border case.
Abdul Wadud expressed that the event is an excellent idea which bridges them with the future generation. He suggested that the youths should spend at least 10 days with the politicians to understand how politicians do things and how policies are made. He cordially invited the participants to be in his constituency and explore his work.

In the suggestion session, some of the suggestions which came up include:
1) Wind as an option to generate power;
2) Clarity and transparency in recruiting teachers;
3) More funding for research;
4) Having bus stations and terminals in appropriate locations of busy cities.

In his concluding remark, Shahriar Alam said, “The representatives of people have changed a lot in the last 20 years. They have become more accountable.” He added, “National service should be introduced so that the youths can understand the work done by the government.”
Abdul Wadud Dara explained “We do not have the place for justification. We need that. We also need to start criticizing positively. Bangabandhu is a pride for all Bangladeshis, youngsters should know more about him-to show him the proper respect.” He further noted that “To run the government, hard decisions are made. Not everyone will understand all the steps taken.” Both the MPs stressed the need for obeying laws. The event came to an end at 6:45pm and Iftar was served.