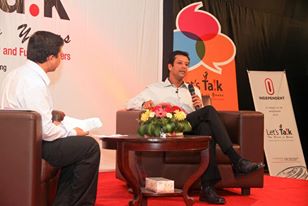 It was time to face the youths of Bangladesh once again. On 14th September 2013, the symbol of young generation politics of Bangladesh Mr. Sajeeb Wazed Joy attended the second (2nd) Let’s Talk program in Chittagong. In the programme around two (2) hundred students were present. Mr. Sajeeb Wazed Joy in his introductory speech addressed the progresses made by the young generation of Bangladesh. He said that the youths of Bangladesh have appeared to be a symbol of greatness in the world map. He also said that because of our rising young population, Bangladesh is now considered among the next top eleven (11) countries in the world.

In the discussion many issues came up for discussion, such as: caretaker government system, stock market debacle, war crimes trial, opposition politics, Dr Yunus and Grameen Bank, the Padma Bridge, modernizing the student wing of Bangladesh Awami League Chhatra League, future of religion-based politics in Bangladesh, education policy and so on. Mr. Sajeeb Wazed Joy addressed all these issues with facts and figures and logical explanations.

Addressing the issue of war crimes trials, Mr. Sajeeb Wajed Joy said that the current government is very sincere about trial of war criminals. The main focus of the trial is to ensure justice for their crimes. On the Chhatra League issue, Mr. Joy said ‘Nearly 700 Chhatra League members are facing judiciary trials for their misdoings’ as a means of showing that no member of the student wing receives any favour for doing crimes.

He also said that Bangladesh Awami League has always been a supporter of peaceful demonstration moralities. They will not tolerate any activity that contradicts with the ideology of the party. Talking about Padma Bridge, Mr. Joy said that preparation of the construction of Padma Bridge is already done. Government is determined to construct this bridge to bring the southern of the Bangladesh closer to the rest of the part of the country. Apart from these issues many other issues like TICFA treaty and its opportunities, Vision 2021, development of Chittagong etc. were discussed.

In his closing speech, Mr. Sajeeb Wazed Joy stated that his party, whilst in the power, is working really hard to develop the country to its best abilities. Given the size of the vision the government has, they would need continuity to implement it. He assured that his party would always be sincere towards progress of Bangladesh at any cost.