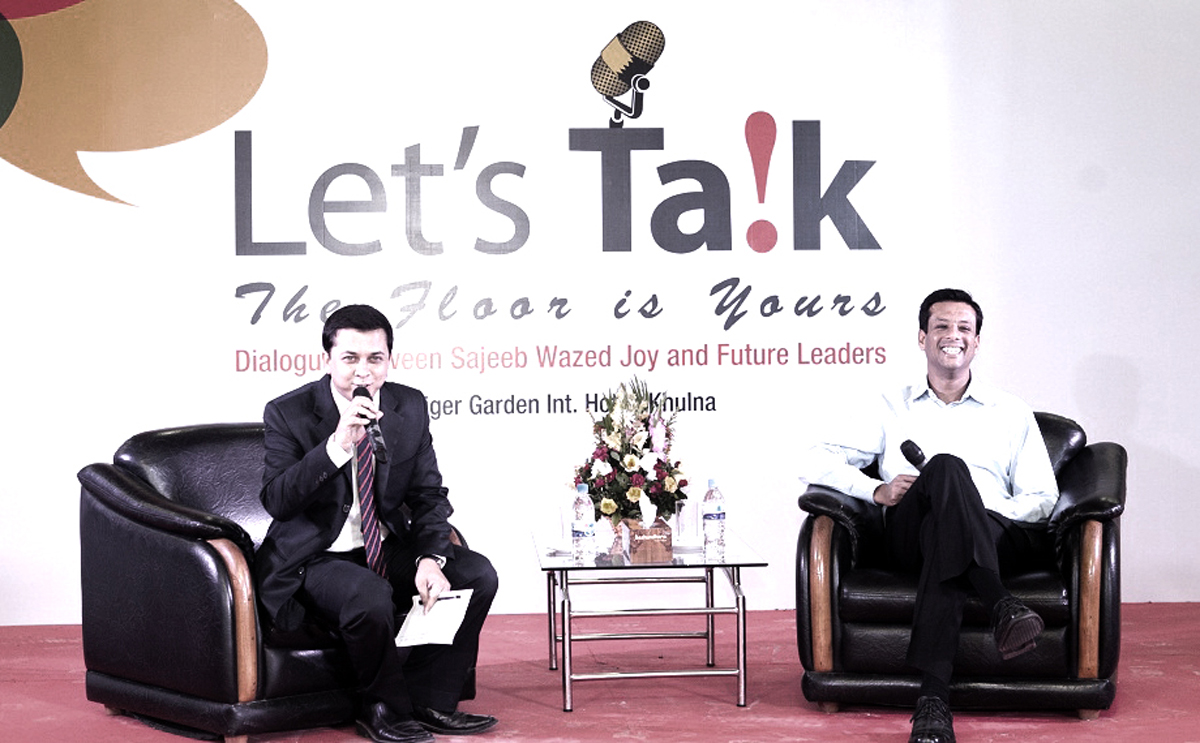 It was a fine morning when nearly hundred students came to the conference hall at Hotel Tiger Garden in Khulna. They were excited as for the first time their voices were going to be heard by a young politician. A politician, whose vein goes deep into the history of the birth of Bangladesh and like his entire family who is devoted towards furtherance of the country’s development priorities. Mr. Sajeeb Wazed Joy was the invited guest in the third (3rd) Let’s Talk held in Khulna on 2nd November 2013. A vibrant three hours of spontaneous discussion followed with the young generation of Khulna, discussing a wide array of national and local topics.

The meeting started with the notation of young generation of our country. Mr. Sajeeb Wazed Joy expressed his immense confidence in the new generation citizens of Bangladesh. He said ‘Compared to many first world countries, youths of Bangladesh are very active in participating into social welfare. They are also very much conscious about their career and development’. In the discussion answering a personal question Mr. Sajeeb Wazed Joy expressed his feelings about the brutality his family went through. He said that ‘It is so unfortunate that my family members were killed as a result of vengeance of anti-liberators. Now when I stand in front of the graveyard of my Grandfather, I feel very depraved. But at the same time, I feel power and motivation to work for the countries welfare like my ancestors”.

Later in his speech Mr. Sajeeb Wazed Joy articulated the developments those took place in the last five years under the government his mother led. He said that the country’s infrastructure is developing rapidly. Now we have four lanes of roads in almost every parts of the country. We have high-speed Internet service, sufficient amount of electricity production and a vision to transform Bangladesh into a technologically advanced developed country. Mr. Joy made a clear statement that development needs a continuous effort and his government is determined to carry forward the promises they made.

In the event the participants came forward with various concerns they wanted to see addressed. These concerns included Padma Bridge, Rampal Electricity Plant, Sundarbans, Hartal issues etc. Mr. Sajeeb Wazed Joy enlightened Rampal Issue as one of the major steps of government towards self-sufficiency in power production in Bangladesh. He said that the government would be using state of the art technology in the plant omitting all kinds of environmental threats for Shundarban.

About Padma Bridge he stated that, Padma Bridge is now the government’s top priority to complete. In the discussion participants were vocal about stopping Hartal. Answering their demand Mr. Sajeeb Wajed Joy said Hartal is a democratic right of the parties. But logical use of this tool needs to be assured. Apart from these many other concerns like border killings, ICT Development, backlog of cases in the judiciary etc. were raised and discussed.

At the end of the program participants submitted an election manifesto to Mr. Sajeeb Wazed Joy which included various local and national concerns they want to be included into national election manifesto. Mr. Sajeeb Wazed Joy closed the program by thanking the participants for their vibrant participation. In his speech Mr. Joy expressed hope that like his ancestors he would also be able to work for the progress of the country no matter what the consequences are.