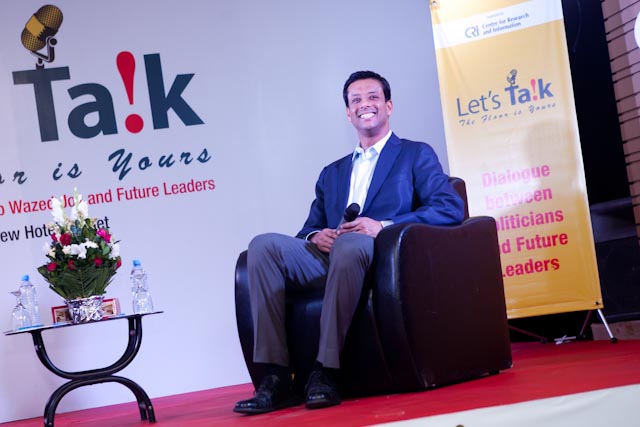 Youths of Bangladesh have emerged as a phenomenal factor in country’s overall development chronicles. Currently 40% of the total population of Bangladesh is represented by the youths and exclusion of this group from the political agenda is undesirable for strengthening the country’s democratic resilience.

Sajeeb Wazed Joy, one of the young politicians and IT advisor to the Prime Minister of Bangladesh believes in the power of youth. Gracing the fourth (4th) Let’s Talk program in Sylhet he ingrained this conviction towards his willingness to become the bridge between youths and policy makers of Bangladesh. The programme was held at the Conference Hall in Hotel Rose View. Over 160 students along with young representatives of different civil society organizations participated in the programme.

In the introduction Mr. Sajeeb Wazed Joy shared his childhood experiences. He said that, he always felt connected towards the birth of Bangladesh, since it was his birth year as well. Reminiscing his childhood Mr. Joy said, “I was born in the Jail of Pakistan. My family members were held as prisoners in Pakistan Jail during the liberation war. After the Liberation war, when Pakistan army was surrendering to the coalition army a group of Pakistani army was ordered to kill my family. They were looking for an opportunity to get inside our house and kill us. But thanks to the officer of the coalition army, he stood there till that group of Pakistani army surrendered”.

Talking about his accreditation with World Economic Forum (WEF) he said, “I had no connection with the WEF. In 2006-2007 during BNP tenure, watching minority groups being humiliated, I became vocal and started blogging. This is how they got my details and after a while they nominated me for Young Global Leaders Award”. Mr. Joy considers himself as one of the youths of this country. He said that he did what every young Bangladeshi would have done. He said the youths of Bangladesh need to rise again to lead the change in the country.

Spontaneous participation of the speakers brought a different dimension to the event. Participants expressed their dream for a Bangladesh where health services will be available for all, farmers will get genuine price in selling their granaries, anyone would be able to be an entrepreneur and so on. Enunciating these dreams Mr. Joy said that the current government is always keen work for the development of this country.

At this point in the event talking about the strength, weakness, opportunities and threads of Bangladesh participants identified youths of Bangladesh as the major strength; political instability as the major weakness; RMG, shipping and industrialization of the country as pre requisites to Bangladesh’s prosperity; and religious militancy as one of the major obstacles to development. Elucidating these concerns Mr. Joy said that Bangladesh Awami League has always been compromising in political matters. He also said that, in previous years when Awami League was in opposition there were no concerns of political instability. But now BNP is not cooperating. Awami League government already extended offers to BNP to sit in the dialogue to resolve current the uncertainty. But they are not cooperating. He asked the young generation of the country to investigate the reasons of such a situation.

On Sylhet development, Mr. Joy said that Awami league government has taken detailed plan to transform Sylhet into a modern city. Awami League has already formed and approved a detailed plan for 30 years based on which development of Sylhet will take place. He added that the government has plans to build hi-tech IT parks, economic zones and strengthening tourism of Sylhet in the upcoming years.

In his closing speech, Mr. Sajeeb Wazed Joy again emphasized on continuation of the development works initiated by the Awami League government. He said Awami League government is the pro-liberation party, which has always been in its best effort to transform the country as one of the powerhouses of the world. And they will continue working for the progress of the country.