The Government of Bangladesh has formulated the Perspective Plan (2010-2021) with the goal of elevating Bangladesh to a knowledge based and technology driven middle-income country by 2021. This is the first long term plan in the history of Bangladesh with elaborate programmes for development. The budget of fiscal year 2014-2015 is an expression and integrated part of that Perspective Plan. The main objective of the proposed budget is to maintain continuity of existing monetary and fiscal policy strategies and to ensure macroeconomic stability.

The policy of the Government is to enhance public expenditure in the next five years and to this end domestic resource mobilization has to be scaled up. Over the past 5 years, revenue collection has increased from 10.7 percent to 13.3 percent of GDP. At the same time, the size of public spending has increased from 15.7 percent to 18.3 percent of GDP. The target over the next 5-years would be to augment resource mobilization to 17 percent and increase the size of the budget to 22 percent of GDP. Side by side, the core objective of the Government is to transform Bangladesh into a middle-income country by 2021 through structural and other reforms, especially in the areas of strengthening local government, land management, institutional development and good governance. 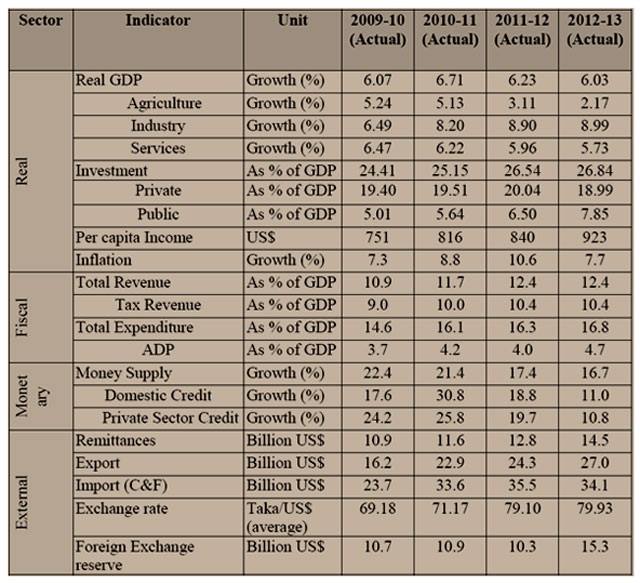 Based on policy assumptions, popular expectations, and rational analyses the Government has set the GDP target at 7.3 percent for FY 2014-15. Considering the recent global economic trend as well as domestic economic scenario the Government remains hopeful regarding growth. The general hope is that in the next fiscal, investment, export and remittance flows will increase as it is expected that the global economy will experience accelerated growth. Finance Minister assumes that during this period, food and energy prices in the international market are likely to decline slightly. Besides, an investment-friendly monetary policy will be maintained ensuring uninterrupted credit flows to the productive sectors. Government initiatives for developing physical infrastructure in the power, energy and communication sectors will continue. Different initiatives will be undertaken for the development of skills and human resources. Fiscal, monetary and stock market reforms will go on. Foreign investment and assistance are expected to increase. Credit and input support will continue in the broad agriculture sector. Above all, the basic expectation is favorable weather and political stability.

Finance Minister is targeting that the general inflation in Bangladesh will be hovering around 7.0 percent by June 2014 and will reduce further at the end of the next fiscal year. If Concretionary monetary (and fiscal) policies taken this estimated inflation rate would minimize the sufferings of mass consumers.

Flowing of money and credit to agriculture and enterprises

Due to the recent positive trend in the global economy the Government expects that import and export growth will accelerate and the export earnings and import expenditure may increase by approximately 15 percent.

Bangladesh’s Annual Development Program (ADP) had been moving ahead slowly due to lack of coordination and proper policy guidelines. But from last few fiscal years ADP policies and implementation strategies are proving productive. 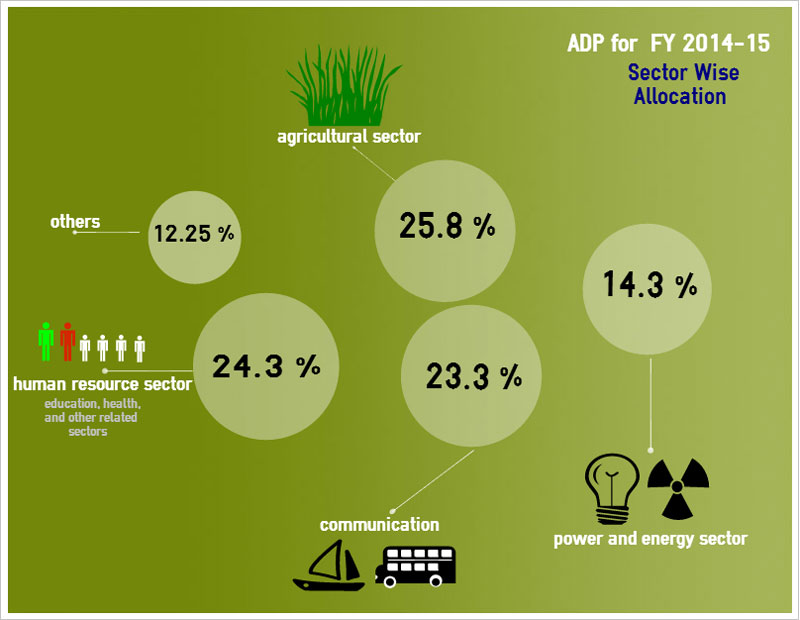 This FY 2014-2015 the government laid emphasis on overall development of the country rather than tackling the on rush of demand of an election year. In the ADP for FY 2014-15, human resource sector (education, health, and other related sectors) will receive 24.3 percent, overall agricultural sector (agriculture, rural development and rural institutions, water resources and other related sectors) 25.8 percent, power and energy sector 14.3 percent, communication (road, railway, bridges, and other related sectors) 23.3 percent and other sectors 12.25 percent of total allocation. This sector wise ADP distribution might prove fruitful to attain Millennium Development Goal (MDGs) by 2015. Our economic indicators would go upward if the allocations properly translate into distribution.

For a detail perspective of the sector wise budget allocations, please click here

During last five years continued performance of the different sectors of the economy have lead to attainment of GDP growth above 6% per annum. Over time, there has been structural transformation of the economy with a shift from predominantly agriculture based economy towards an industry led and service oriented economy. It can be anticipated that this budget for FY 2014-2015 would definitely carry out the momentum and lead the economy to its desired growth.