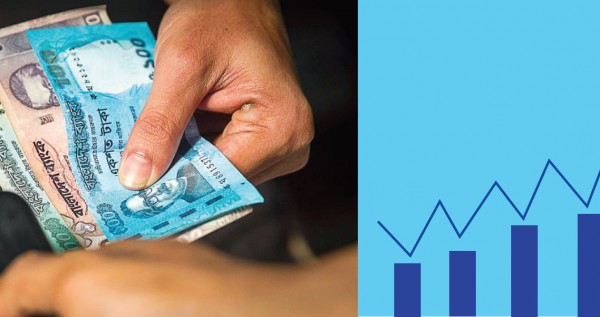 Bangladesh is in the process of transition from a predominantly agro-based economy to a modern time-befitting one. There has been a considerable change in global flows of trade  and finance including a surge in Foreign Direct Investment (FDI). Several underlying factors have contributed to increasing the economic progress in Bangladesh. These are balanced trade and exchange rate liberalisation, current account convertibility, prominence on a private sector led development, liberalisation of the investment regime, opening up of infrastructure and services to the private sector– both domestic and foreign, and above all the growing interest of foreign investors in energy and telecommunication and other emerging sectors. Every major economic research suggests that Bangladesh has been a golden land in terms of doing business; and people of the land are satisfied enough with the pace of progress and development.

The Economic Conditions Report 2014 of Pew Research Centre (a Washington-based research organisation) found that 71 percent of the Bangladeshis are happy with the economic health of the country, while only 28 percent dissatisfied. The numbers reveal that majority of Bangladeshis have expressed optimism about the economy, giving the thumbs-up to the government’s economic management.

A staggering 66 percent of the respondents said they expect the economic situation in Bangladesh would improve over the next 12 months, while 22 percent said the situation will remain the same. One in 10 respondents said the economic situation will worsen. A lack of job opportunities in the country worries 70 percent respondents. There is, however, low concern about income inequality as only 34 percent Bangladeshis saw the rich-poor gap as a major problem.

Apart from Bangladesh, the poll was conducted in eight other developing countries: Ghana, Kenya, Senegal, Nicaragua, Uganda, Tanzania, El Salvador and Palestine. It should be noted that in most nations, people say their country is heading towards the wrong direction and most voice the view that economic conditions are bad.

To implement Vision-2021, Perspective Plan (2012-13) and 6th five year plan (2011-2015), incumbent government has planned effective budgets every year and implemented them successfully. Overcoming the challenges of worldwide recession in FY 2011-12, Bangladesh has been able to keep a consistent rate of growth over 6 (six) percent. Economists at Standard Chartered Bank believe that Bangladesh could join what have been called the “7 percent club” of economies that expand at least 7 percent annually for an extended period — allowing their economies to double every decade. Current members of the “club” include China, Cambodia, India, Mozambique and Uganda.[i] 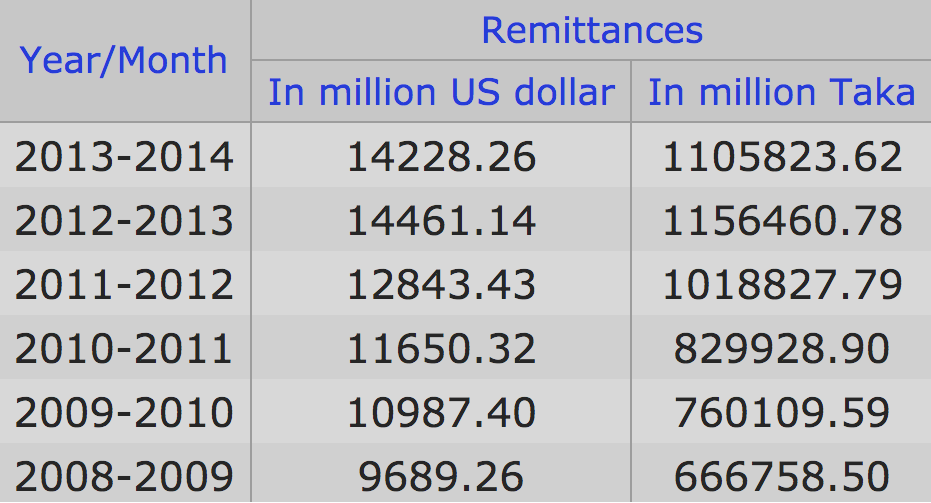 Total remittance in FY2013-14 stands at US$ 14.22 billion. Recently, World Bank has ranked Bangladesh as the eighth remittance receiving country in the world in 2013. In recent fiscal year, 296,000 Bangladeshi went abroad which makes the total of 2.35 million of expatriates. Keeping the original trend, remittance inflow is on the rise from Malaysia, Singapore, United Kingdom and many other countries. 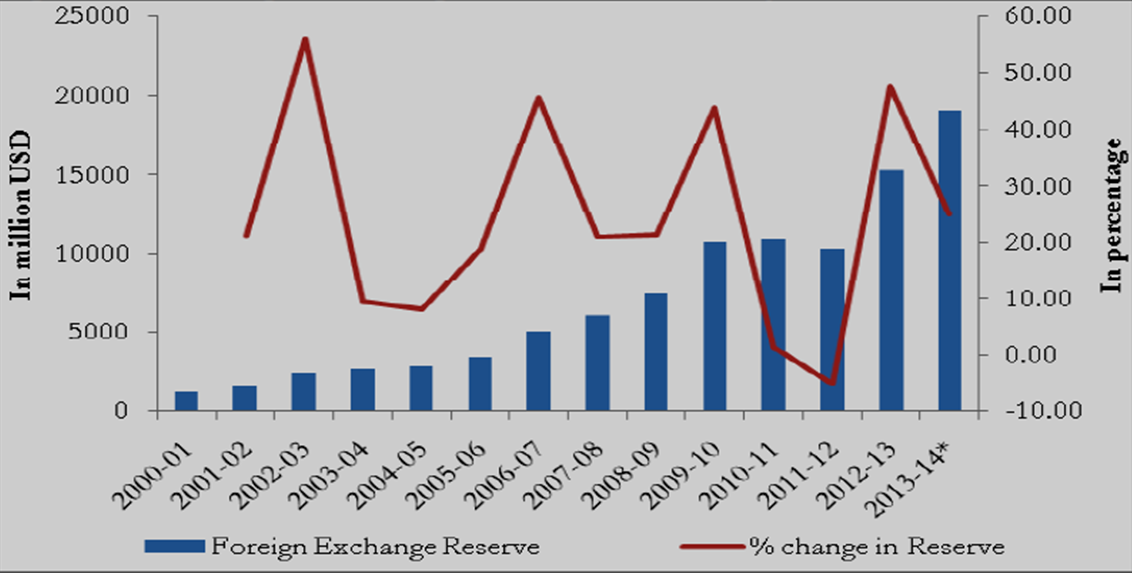 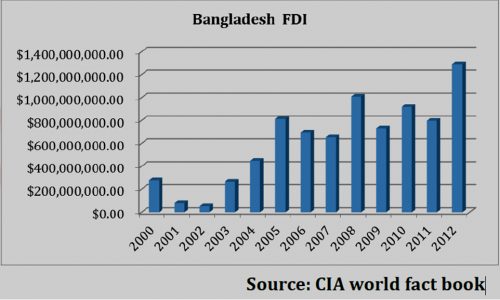 During July-December of FY 2012-13, FDI inflow increased to USD 797.54, which is 61.11 percent higher than that of January-June of 2011-12 and 13.96 percent higher than that of the same period of the previous fiscal year. In FY 2011-12, FDI increased to USD 1194.88 million, which is 53.38 percent higher than that of the previous fiscal year.[iv] The World investment Report released recently by UNCTAD (United Nations Conference on Trade and Development) shows Bangladesh is placed as a second favoured investment destination in South Asia after India, which got US$ 28 billion. Pakistan stood third with US$ 1.3 billion pouring in as FDI. Inflows of FDI into Bangladesh rose 24 per cent year-on-year to US$ 1.6 billion in 2013.

In January 2010, JETRO conducted a comparative survey of investment-related costs in 29 major cities and regions in Asia. The following comparison is based on that survey with some selected cities [v]:

– Bangladesh offers a truely low competitive cost base. Wages and salaries are still lowest in the region, a strong business advantage. Yet this is an increasingly well-educated, adaptive and peaceful population with many skilled workers
– Dhaka’s skilled labor cost base is still less than the other major cities
– Dhaka’s management grades are 2-3 times less than in Singapore, Shanghai, Bangkok
– Industrial estate rent in Dhaka is cost effective than Shanghai, Jakarta, Bangkok.
– Office rents are also very competitive with other international cities
– Dhaka’s housing rent for foreigners are less expensive than Singapore, Mumbai, Karachi, Hanoi
– Cost of diesel in Dhaka is found to be more competitively priced than most other large cities
– Vehicles increasingly use LPG as Dhaka gasoline costs are competitive with most other cities 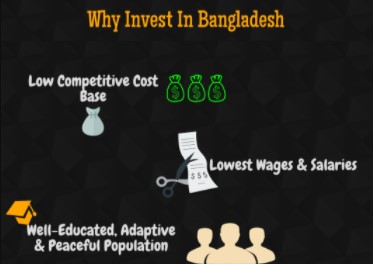 Mckinsey Case Study: Bangladesh the Next ‘Hot-spot’ in Apparel Sourcing

According to the McKinsey forecast report, many chief purchasing officers view Bangladesh as the next hot spot for sourcing in the ready-made-garment market. With about $15 billion in exports in 2010, ready-made garments are the country’s most important industrial sector; they represent 13 percent and more than 75 percent of GDP and total exports, respectively. McKinsey forecasts export-value growth of 7 to 9 percent annually within the next ten years, so the market will double by 2015 and nearly triple by 2020.[vi] “For many years, China was almost always the hands-down answer to all buyers’ needs,” the consulting firm McKinsey noted in a recent report. Now, Western wholesale buyers of garments are looking for the “next China,” and Bangladesh “is clearly the preferred next stop for the sourcing caravan.” Bangladesh exported nearly $18 billion worth of garments in the 12 months through June 2011, $10.5 billion of that to the European Union and $4.6 billion to the United States, according to the Bangladesh Garment Manufacturers and Exporters Association. The total nearly doubled from four years earlier, and McKinsey forecast that the garment industry would grow by as much as 9 percent a year over the next decade.[vii]

HSBC’s latest Trade Confidence Index, which was published 15 September 2014, shows that Bangladesh’s trade confidence rose sharply by 38 points in six months, which is the second highest among 23 countries globally. The jump was due to growing demand for its garments from Western buyers and the recent initiatives aimed at making the country’s apparel factories safer. 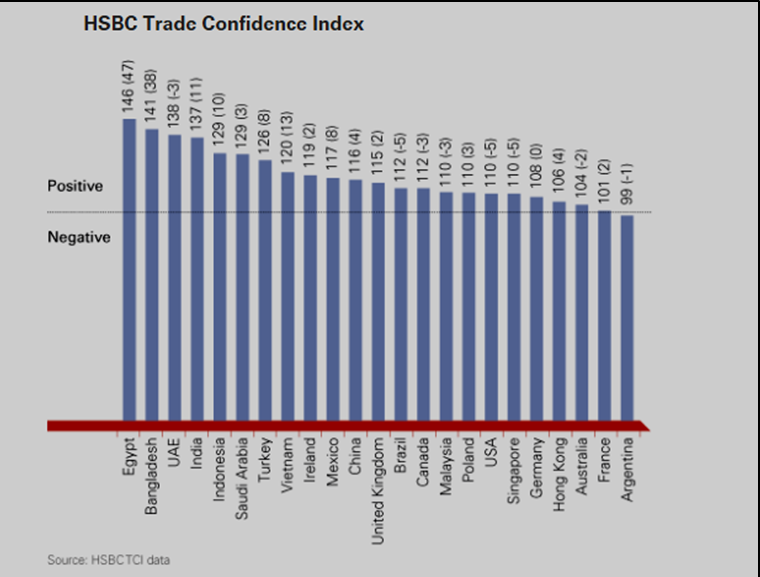 Bangladesh’s score increased to 141 in the first half of 2014, from 103 in the second half of 2013. Only Egypt is ahead of Bangladesh as the economic climate in the largest Arab country improved in recent times. Bangladesh outpaced the UAE, India, Indonesia, Saudi Arabia, Turkey, Vietnam, Ireland, Mexico, China, the UK, Brazil, Canada, Malaysia, Poland, the USA, Singapore, Germany, Hong Kong, Australia, France and Argentina.[viii]

On the longer-term outlook on Bangladesh, HSBC expects the country to grow rapidly over the remainder of the current decade, and investment, particularly in infrastructure, will continue to rise strongly to support this.