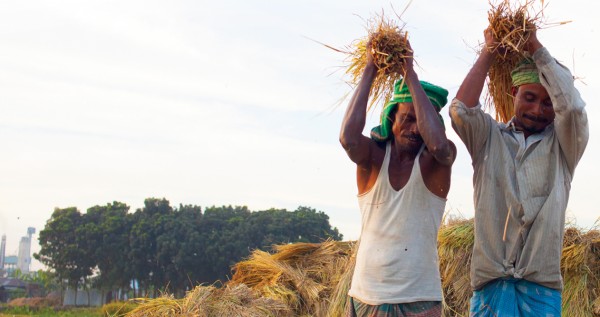 The overriding objective of all agricultural policies and development strategies since independence in Bangladesh has been generated to achieve self-sufficiency in food grains. Present government has taken a number of initiatives to prop up agricultural growth – such as innovation in high yielding rice and paddy seeds, extension at the field level, provision of target based agricultural assistance, increase of agricultural credit flow and inspection, supply of uninterrupted power for irrigation, diversification of agricultural products along with extension of marketing facilities. To be self-sufficient in food production as well turn the agriculture sector into a dynamic one government has adopted numerous policy measures and actions accordingly. Currently, about 44 per cent of the country’s labour force engaged in the agricultural sector and it contributes about 16.33 per cent of the GDP.

Agricultural Growth: Recent Accomplishment
Bangladesh may continue to break record in rice crop production in the next 10 years, said Food and Agriculture Organisation (FAO) in its latest forecast.

The volume of food grain production in FY 2010-11 was 36.065 million MT where as in FY 2013-14 it is estimated as 37.782 million MT. In FY 2013-14 (July-February) Bangladesh earned US$ 899 million by exporting agricultural products which were 4.53 percent of total export earnings. The government has taken steps to increase exports of agricultural commodities. Nearly 100 types of fruits and vegetables export from Bangladesh to more than 40 countries of the world.

The above table reveals that production of food in the last six years has significantly increased. Total production of rice, wheat and maize rises from 28.954 million MT to 37.782 million MT in 7 years. About 0.335 million rural poor are now engaged as participants of the social forestry programme. This sector is contributing 1.7% (2010) of the nation’s GDP. Recently, Bangladesh has become 7th largest potato producer in the world. Bangladesh’s potato production increased nearly three times (197 per cent ) in last thirteen years by achieving 14 per cent output growth on the year-on-year basis since 2000.

According to a recent report of FAO, Bangladesh stands fourth in producing sweet water fish. In 10 years, from 2004 to 2014, Bangladesh’s fish production increased by 53%.FAO predicts Bangladesh will be the first of the four countries to achieve massive success in fish production by the year 2022. Not only sweet water fish, after settlement of the maritime boundary issue with Myanmar and India, catching fish from the Bay of Bengal is likely to increase manifold (The State of World Fisheries and Aquaculture, FAO Report, 2014).

Logistic Support & Subsidies:
In 35 districts, government has arranged to supply tractors, power tillers, harvesters and other agricultural equipment at 25 percent subsidized prices. Under the agriculture rehabilitation program, the government continues to supply seeds and fertilizers to the farmers free of cost. As part of this program, with a view to producing ‘UfshiAush and Bona Aush’ (Nerica), the government distributed free seeds and fertilizers to as many as 3,32,500 farmers in FY 2012-13 at the cost of Tk. 43 crore.
Our government has provided a total of around Tk. 23,000 crore as agriculture subsidy for the development of agriculture sector in the past four fiscal years. For FY 2013-14, Tk. 9,000 crore had been allocated as agriculture subsidy. The targets of distributing agricultural credit for FY 2012-13 and FY 2013-14 are Tk. 14,130 crore and Tk. 14, 595 crore respectively. Total budget allocation Tk. 12,275.98 crore for FY 2013-14, development and non-development budgets combined, for the Ministry of Agriculture.

Supply of Seeds:
The Government has also accorded highest priority to provide quality seeds to the farmers. For getting desired amount of production, BADC had set a target in FY 2013- 14 to produce 1,42,465 MT seeds. Production and distribution of seeds through BADC’s own farms and contract growers for FY 2011-12, FY 2012-13 and FY 2013-14 are shown in Table below:

Projects under irrigation have been on expansion over the last six years. In FY 2004-05, it was 4.652 million hectares, which increased to 5.373 million hectares in 2012-13. BADC provided irrigation facilities through utilization of deep tube wells, shallow tube wells, floating pumps and low lift pumps as well as re-excavation of canals and the construction of sluice gates and water control structures under different irrigation and area development projects.

Comprehensive Approach towards Increasing Agricultural Production: Collaboration with FAO
Both in terms of institutional transformation and knowledge transfer, Food and Agriculture Organization (FAO) has been working with Bangladesh government to improve agricultural production in Bangladesh through its technical support programmes. Some of the notable steps to boost up productions are:
(http://www.fao.org/fileadmin/user_upload/faobd/docs/Achievements/Bangladesh_edoc_final_en.pdf)
• Development of Agro-ecological Zones (AEZ) database and installation of a Geographic Information System (GIS);
• Technical support to establish the Soil Resources Development Institute (SRDI), including its soil survey and soil analytical programmes;
• Transformation of the Directorate of Agriculture (extension and management) into the new Department of Agricultural Extension (DAE);
• Support for the development and modification of agricultural extension systems and technical training programmes for extension staff and farmers through the Farmers Field School (FFS) programme;
• Transition to irrigated agriculture by testing and demonstrating minor irrigation schemes;
• Cereal technology transfer;
• Integrated Pest Management (IPM);
• Improvement of household food security;

Recently Bangladesh Bank has formulated its Agricultural and Rural Credit Policy and Programme for the FYs 2009-10, 2010-11, 2011-12 in an extended format. The main objective of this policy is to ensure easy access to the agricultural and rural credit facilities by the farmers from the scheduled banks of the country.Features of this policy are-

• Widening the scope of agricultural credit and financial inclusion,
• Expanding banking services to rural areas using information technology,
• Deciding the courses of action for adapting the impact of climate change,
• Inclusion of credit norms for a number of new crops,
• Allowing concessional interest rate (4 percent) for the production of import substitute crops etc.
• In FY 13-14 around 3.3 million farmers got agricultural and rural credit of which 0.6 million were women. They got Taka 16.1 billion as agricultural and rural credit from different banks.
• In FY 13-14 around BDT 7.6 billion was disbursed among about 0.2 million farmers through 15862 open credit disbursement programmes arranged by different banks.
• In the same year about 2.5 million small and marginal farmers got BDT 106.5 billion agricultural loans from different banks.
• About BDT 483.6 million of agricultural and rural credit was disbursed during FY 13-14 about 23976 farmers living in the less developed area of haor, char etc. in FY 13-14.

• It is noteworthy that 619 successful farmers got about BDT 91.0 million agricultural credit from different banks.
Around 9.586 million farmers have been allowed to open accounts with the State-owned Commercial Banks with an initial deposit of BDT 10 only which are being used for credit disbursement, savings and remittance purposes. During FY 2013-14, agricultural and rural credits of BDT 14,595.15 crore were disbursed. 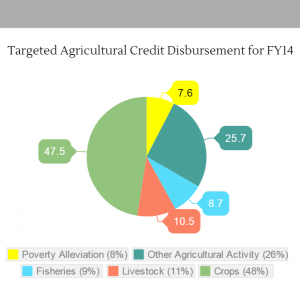 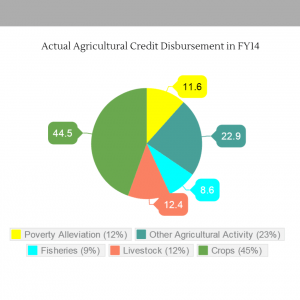 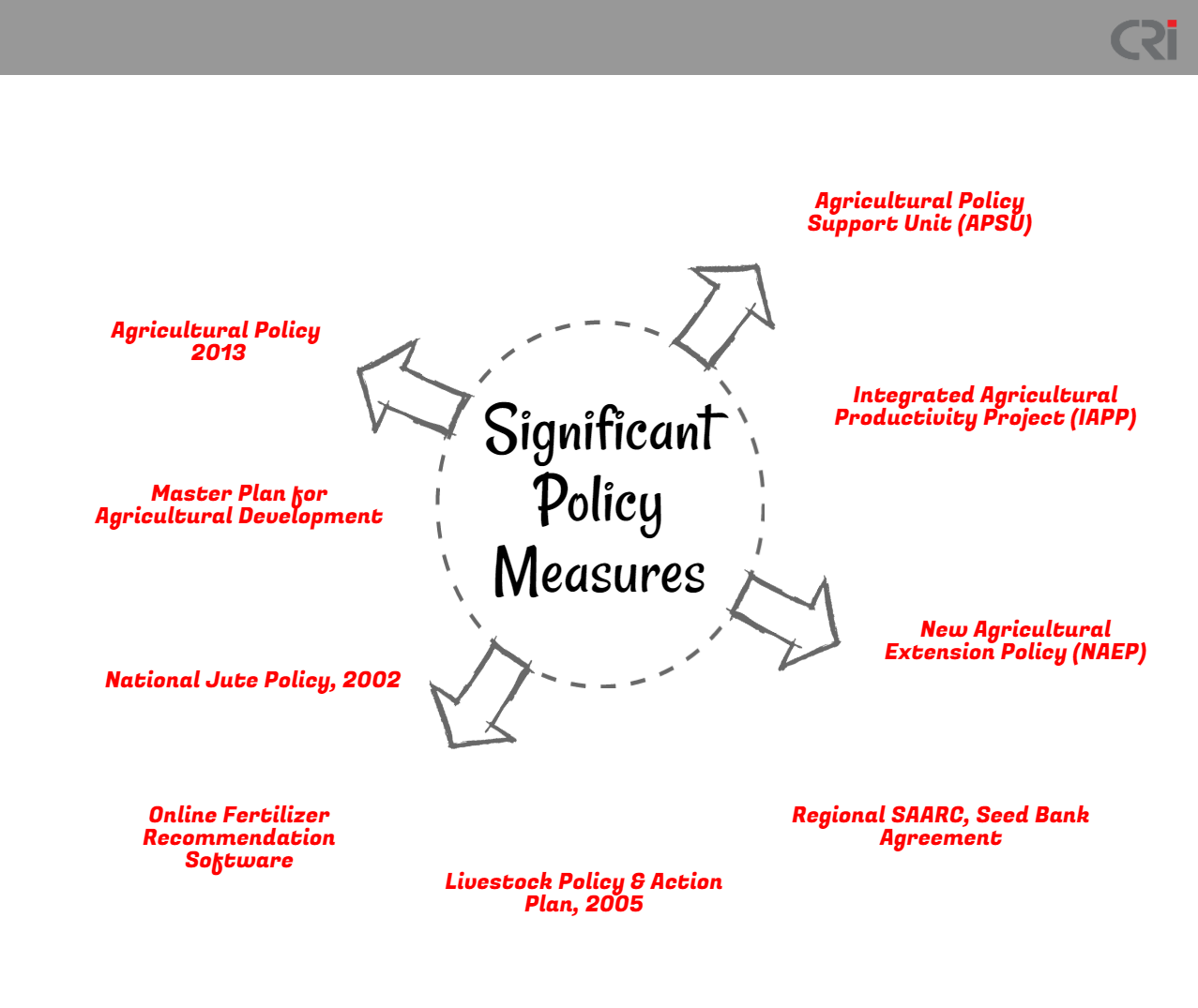 Actions taken Under the Policies

• Introduction and extension of salt and draught resilient rice varieties in the south and north region of the country;
• Enhancement of irrigation facilities to increase crop production through the construction of rubber dams in small and medium rivers;
• Establishment of seed multiplication farm in the south west region of the country to ensure quality seed supply;
• Marketing of agricultural products and development of rural communication to ensure fair price of agricultural products;
• Introduction of new varieties of crops to cope up with the possible climate change;
• Farm mechanisation technology to increase crop production and minimise the seasonal labour crisis;
• Transforming the barren land into agriculture land through the extension of irrigation areas;
• Introduction of community rural radio to make Digital Agriculture a success;
• Reducing import dependency in respect of sugar and molasses;
• Research and extension activities to increase cotton production;

Ongoing Activities to Maximize the Achievements

• A Project on Establishment of Integrated Seed Cold Storage Complex to supply quality seed to farmers to increase crop production;
• A project on Genome Sequencing of Jute for selection of jute cultivation area and extension of Ribbon Rating Technology.
• Integrated Horticulture Development Project to increase fruit production and extension.
• There were 71 development projects in the Revised Annual Development Programmes (RADP) of FY 2011-12 under the Ministry of Agriculture. Of which, 67 (including 7 JDCF projects) were investment projects and the remaining 4 were technical assistance projects.
For achieving the set goal of MDG and turning Bangladesh into a middle income country by the 2021, agriculture must grow at a constant rate of minimum 4-4.5% per year.
Goal of the present government of Bangladesh is to reduce the import dependency, and again become self-sufficient in food production. By the year 2021, malnourishment would be reduced by 85%, and Bangladesh will become a food exporting country. Government takes Seventh Five Year Plan (7FYP) in agriculture sector with a view to ensure national and household food security, increasing farmer’s income and the creation of employment opportunities at farm and home level. Ensure “Food for all” policy is the main aim of the government. 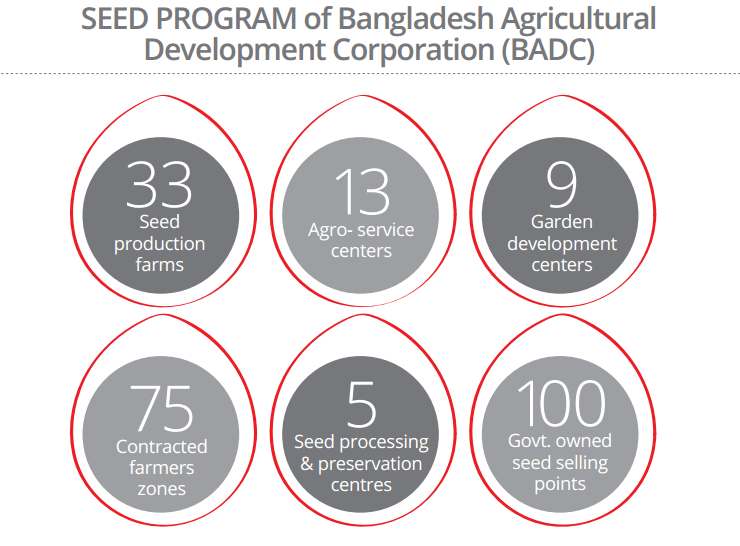