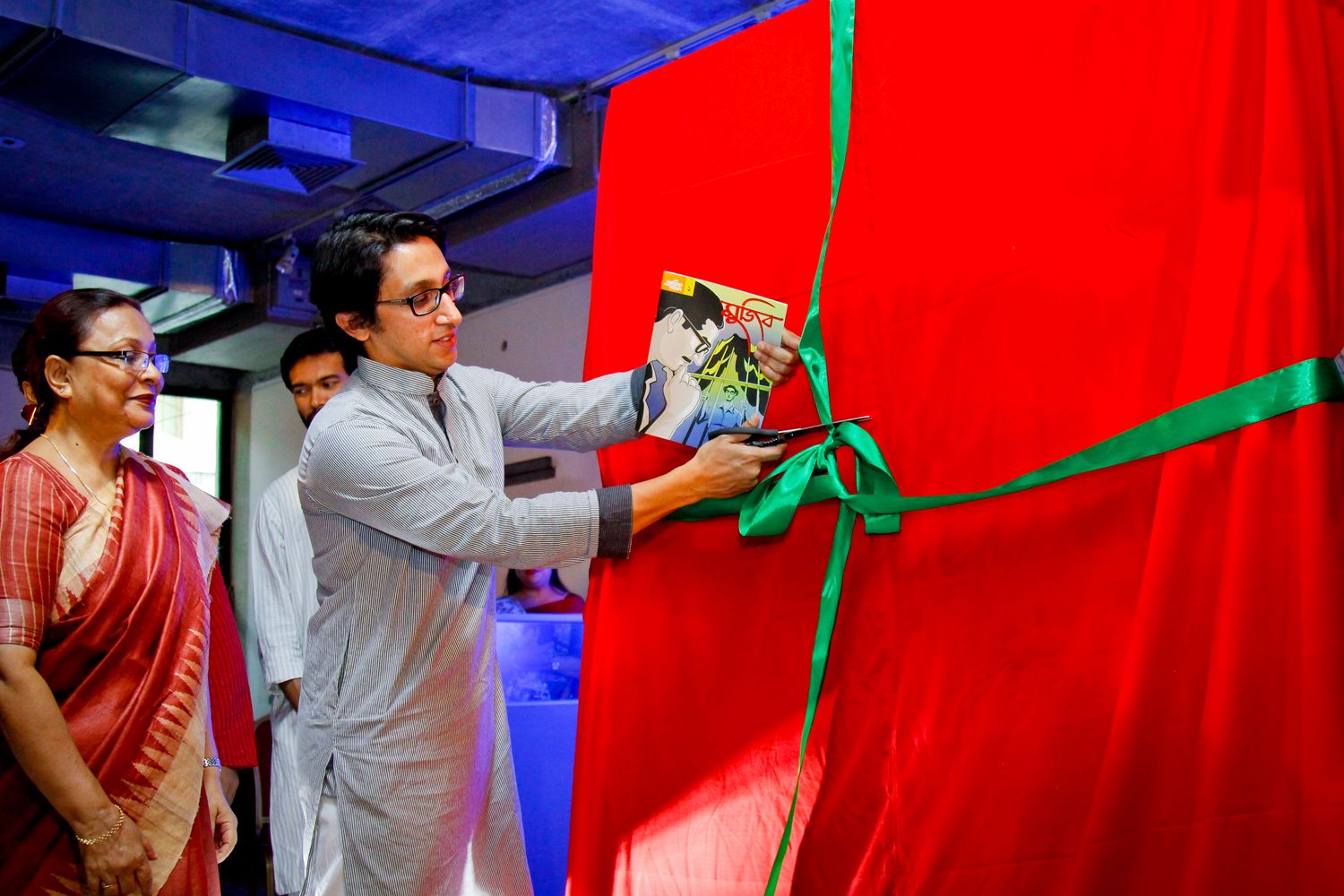 Creativity of an artist mingled with real incidents gave an impression that Bangabandhu Sheikh Mujibur Rahman, the father of our nation, is alive in the pages of a first ever comic book for children.

In a bid to create interest among kids and teenagers in learning life of Bangabandhu and history of the nation, the Center For Research and Information (CRI), a research organization, launched the 24 page book, the first episode of a graphic novel series titled “Mujib”,

The first part presents the background against which Bangabandhu began writing his autobiography, the stories of his birth, childhood, getting a pair of spectacles when still young, and his first jail term.

Another 12 parts will be published in stages narrating vision and mission that paved the path towards his great leadership. The series will present before the young generation how he got involved in politics, how he voiced for independence of the green delta and how he ended up being Bangabandhu (the friend of Bangladesh).

At Bangabandhu Memorial Trust, Radwan Mujib Siddiq, grandson of Bangabandhu, along with two artists, Sayed Rashad Imam Tanmoy and ABM Salauddin Subho, unveiled the cover of the four colour book based on the facts as stated by Bangabandhu in his book, on observance of the 95th birth anniversary.

Radwan Mujib, son of Sheikh Mujib’s younger daughter, Sheikh Rehana, said that he had not seen his grandfather but had got to know him from the stories he heard of him from his mother and aunt.

“When I was in school, many of my friends did not know my grandfather’s name. Teachers often forbade me to mention him. This used to cause me a lot of pain.

“Mother used to tell me to be patient. When I was older, I used to wonder how to familiarise those of my age with grandfather,” added Radwan Mujib, also a trustee member of CRI.

“I am feeling very happy to hold this book in my hand today. It’s a great satisfaction for me to have been able to do at least this much for my grandfather.”

Sharing his thoughts on the initiative, Radwan Mujib said that “We want to make our children and youths aware about the historic activities of Bangabandhu Sheikh Mujibur Rahman. We want to portray his lifestyle — how he became father of the nation despite coming from an ordinary family.

“We want to take the information to our children and youths through different channels and modes. This graphic novel is a part of that initiative.”

Cartoon Maestro Ahsan Habib said, “The publication of this book has given Bangladesh its first graphic novel. This is a big thing for us cartoonists.”

He added that comics did not find a place in the children’s section of the Amar Ekushey Library run by the Bangla Academy.

Thanking CRI for the initiative, he said that “we were trying for their inclusion for a long time. Maybe, we will now find a niche, thanks to this graphic book on Bangabandu.”

He said there could hardly be a better way to present Bangabandhu to children.

Another eminent cartoonist Rafiqun Nabi said not only will the book attract children but will also be useful for adults.

According to CRI Executive Director Sabbir Bin Shams the series targets children and teenagers who grow up on a steady diet of comics and books.

The graphic novel is first of its kind that will address the country’s youth about the contribution of the father of the nation in such a unique way, he said.

At the launch children also shared their ideas after having a glance at the book.

Azmal Tanjim Shakir, a seventh grader at National Ideal School, said, “This book is presented in such an interesting way that I feel very cheerful while reading it and seeing the comic strips.”
Reporters representing media outlets both print and electronic turned out in their numbers and gave an extensive coverage of the event.

Hailing CRI for the initiative, different news reports stated that such an initiative would help the next generation know the real life and contribution of Bangabandhu. In addition, that book will appear as a good answer to smear campaign centering Bangabandhu.

All the news links published in different media are mentioned below: