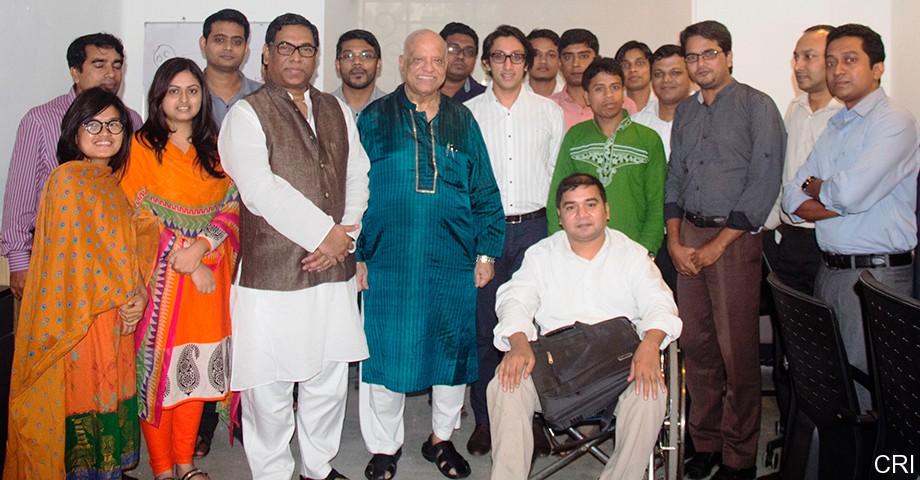 Honorable Finance Minister of Bangladesh, Mr. AMA Muhith, came to visit the offices of Centre for Research and Information (CRI) on 6th September, 2015. Discussions were held on a number of subjects including on the possible areas of cooperation between CRI and the Ministry of Finance, especially as regards the Young Bangla platform. CRI presented its findings on Young Bangla awardees and participants and what sort of support they can obtain from the Finance Ministry and its subordinate organizations. The Minister pledged his all out support in this regard.

The Minister considered the proposal from CRI to introduce internships for youths at the Ministry as part of the “Vision 2021 Internship” initiative and responded positively. Mr. Muhith stressed on the greater utilization of data and statistics for sound political research. He commented that although government is providing many services, the news of such services are not being disseminated to everyone, and that is an area worth investing more of our efforts.

He spoke of the Prime Minister of Bangladesh Sheikh Hasina and highly praised her ideas and commitment behind the 2008 elections, considered to be the most acceptable of all elections in the country in recent times. He stressed on the proper research at the grassroots level as regards polling data and statistics.

Commenting on the visions of Prime Minister Sheikh Hasina, Mr. Muhith commented that in order to achieve targets, one must have vision. He was referring to Bangladesh’s recently acquiring lower middle income country (LMIC) status and the role played in the said achievement by Prime Minister Sheikh Hasina’s plans and policies, including the Vision 2021. He concluded that after the last six years of progress and advancement under the prudent leadership of Premier Sheikh Hasina, Bangladeshis are now more confident, their national pride having been “restituted”.
Speaking on national issues and employment, he identified that there is a shortage of good managers in Bangladesh, in all sectors, and that we need to put more focus in coming up with candidates with good managerial degrees and experience. This, he said, would put the much needed impetus for further boosting industrial and service productivity.

Speaking on his political career, he shared his thoughts on campaign strategies and the journey towards Parliament. CRI staffs got a rare opportunity to speak so candidly with the man who has now presented the National Budget for the seventh time in a row, the longest continuous period for any Finance Minister of Bangladesh.

CRI Trustees Mr. Radwan Mujib Siddiq, Mr. Nasrul Hamid (Honorable State Minister, Ministry of Power, Energy and Mineral Resources) and Executive Director Mr. Sabbir Bin Shams were present during the meeting. He was handed over the publications prepared by CRI so far, including the first in the series of graphic novels on the Father of the Nation Bangabandhu Sheikh Mujibur Rahman, titled “Mujib”.

Become an intern at MoPEMR for 4 months!