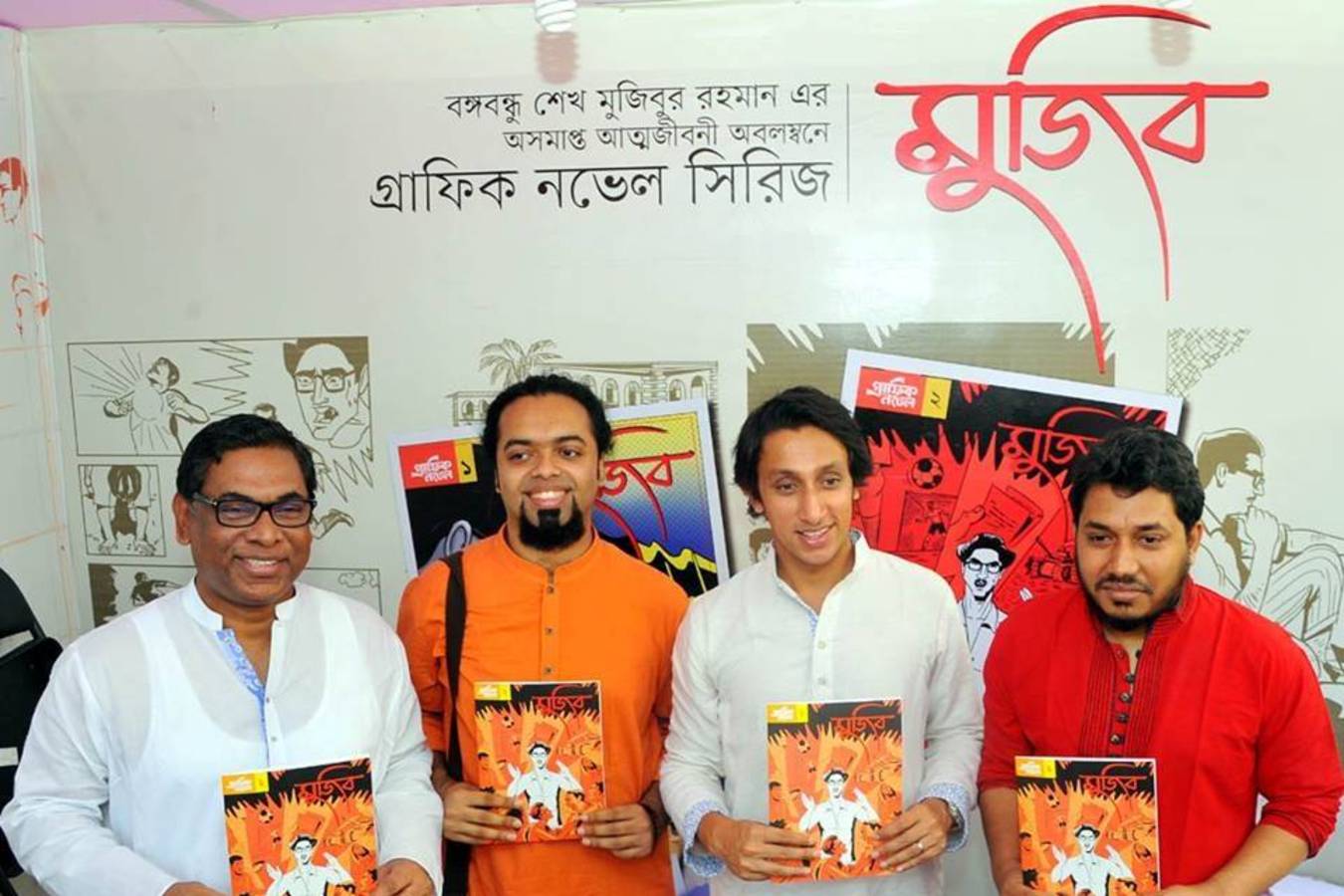 Surrounded by the smiling faces of around 200 children, Part-2 of the graphic novel series ‘Mujib’ was unveiled today by its publisher and Trustee of Centre for Research and Information (CRI), Mr. Radwan Mujib Siddiq at the Amar Ekushe Grontho Mela (Book Fair). Adorning yellow and other colors which go with today’s theme of ‘Pahela Falgun’, and disregarding the sudden heat, the children were seen joyously accepting their copies of ‘Mujib’ from Mr. Radwan, who also happens to be one of the two proud grandsons of the Father of the Nation. To encourage the children, the unveiling ceremony was attended and addressed by Mr. Asaduzzaman Noor and Ms. Tarana Halim, the once great actors of the screen, and now both members of the Bangladesh Cabinet.

As part of the event, and based on a quiz taken the day before, 70 children received gift sets containing colour boxes, sketch books, and of course free copies of Parts 1 and 2 of ‘Mujib’. Mr. Radwan himself handed over the boxes to the children. Addressing the children, he said that their intention behind the initiative was to introduce the life of Bangabandhu to the children of the nation using a medium they’d understand and find interesting. He reminded the children present the need to know about the life of Bangabandhu, as they can learn so much from it. He pointed out that the life of the great man teaches us that with hard work, dedication and belief in oneself, any person can achieve any goal or aspiration.

He thanked his team at CRI for the work put behind in materializing the aim of coming out with this series. Along with thanking Mr. Syed Rashad Imam Tanmoy (the designer) and Mr. Shibu Kumar Shil (the editor), he also thanked his aunt and mother, the surviving daughters of Bangabandhu, Honorable Prime Minister Sheikh Hasina and Mrs. Sheikh Rehana. He noted that both the ladies gave a lot of time and effort in painstakingly checking every aspect of the work and giving their feedbacks accordingly.

The unveiling ceremony was also attended by ‘Mujib’s co-publisher, CRI Trustee and Honorable State Minister for Power, Energy and Mineral Resources Mr. Nasrul Hamid. Reiterating the objectives behind the project as stated by Mr. Siddiq, Mr. Hamid added that they are currently undertaking a number of other initiatives to publicize the life story of the Father of the Nation as much as possible, especially among children and youths. CRI Executive Director Mr. Sabbir Bin Shams, parents of the children attending, and a host of other literary personalities, dignitaries, and members of the press and media were present during the occasion.

Part 1 of ‘Mujib’, the one of a kind graphic novel series based on Bangabandhu Sheikh Mujibur Rahman’s “Unfinished Memoirs”, came out last year in March 2015. CRI intends to publish 10 more in the coming days as part of the 12-part series. Copies of Mujib 1 and 2 are both available to collect from the stalls of CRI and Charcha Publications at the Amar Ekushe Grontho Mela (Book Fair) throughout February. They will also be made available to the leading bookstalls soon, and bulk amount of the series can also be collected directly from the publishers directly.