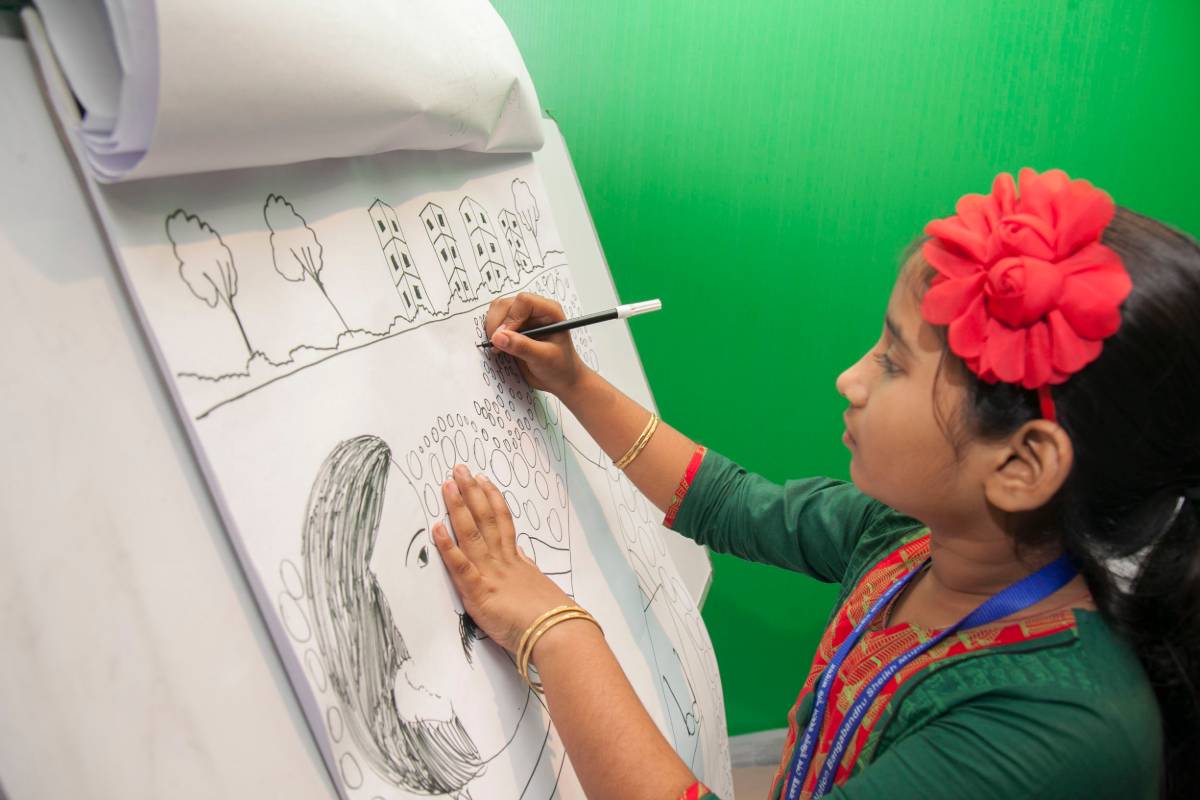 To mark the 97th birth anniversary of the Father of the Nation Bangabandhu Sheikh Mujibur Rahman, Information and Communications Technology (ICT) Division of the Government of the People’s Republic of Bangladesh and Centre for Research and Information (CRI) arranged a three-day interactive exhibition programme at the Father of the Nation Bangabandhu Memorial Museum in Dhanmondi, Dhaka. The exhibition, which started on 17 March and ended on 19 March, was meant as a tribute to the architect of Bangladesh’s independence and the greatest Bengali of a thousand years.

The highlight of the initiative was the opportunity for children to paint as they pleased. Many drew Bangabandhu in his many manifestations, while others drew diverse aspects of our society and lives. Those who drew received gift sets of painting and drawing materials. Other visitors to the exhibition were often surprised at the high quality of some of these paintings by the children. Another very popular feature of the exhibition was the scope to take virtual photographs with Bangabandhu Sheikh Mujibur Rahman via augmented reality technology. Visitors cued up to take such photographs which they then received directly from the Facebook page of the ICT Division. The option was most popular among the children, although their parents and other adults were not far behind in their enthusiasm.

ICT Division had also recently undertaken the project to develop a coloured version of Bangabandhu’s 7 March historic speech. This version of the speech, which was first publicly telecasted during CRI-Young Bangla’s Joy Bangla Concert 2016, was on display round the clock in big screen LED. Many watched the speech throughout the three days of exhibition. Most notable presence in the screening room was that of the various groups of children from schools and Madrassas across the country who specifically came to visit the museum to mark the 97th birth anniversary.

CRI arranged for a separate section in the exhibition for display and sale of the graphic novel “Mujib”. Both Part 1 and 2 (recently released) were on display. The exhibition also displayed various pages of the graphic novels on wooden plaques mounted on the walls, where visitors could read some parts of the novel. There were also arrangements for visitors to experience the mobile app on Bangabandhu via the multiple tablet PCs in the venue. The exhibition and its features were free for all visitors to the memorial museum.

Given the popularity among children and adults both, ICT Division and CRI wants to replicate the initiative more, especially on days significant to the life and legacy of Bangabandhu Sheikh Mujibur Rahman. In fact, on the first day, the exhibition was graced by the presence of Honorable Prime Minister Sheikh Hasina. She was so impressed to see the arrangements that she commented that such initiatives should be given a permanent space within the museum complex.

Become an intern at MoPEMR for 4 months!