On 1st November, 2016 (Tuesday), a high-level delegation of the Washington based National Democratic Institute (NDI) visited the offices of the Centre for Rseaerch and Information (CRI) for an official meeting. The delegation comprised of among others, Ms. Sandra Pepera (Director, Gender and Democracy), Mr. Lawrance Lachmansingh (Development Consultant), Mr. Rishi Datta (Former Country Director of NDI Bangladesh) and Ms. Tina Byenkya (Program Officer). 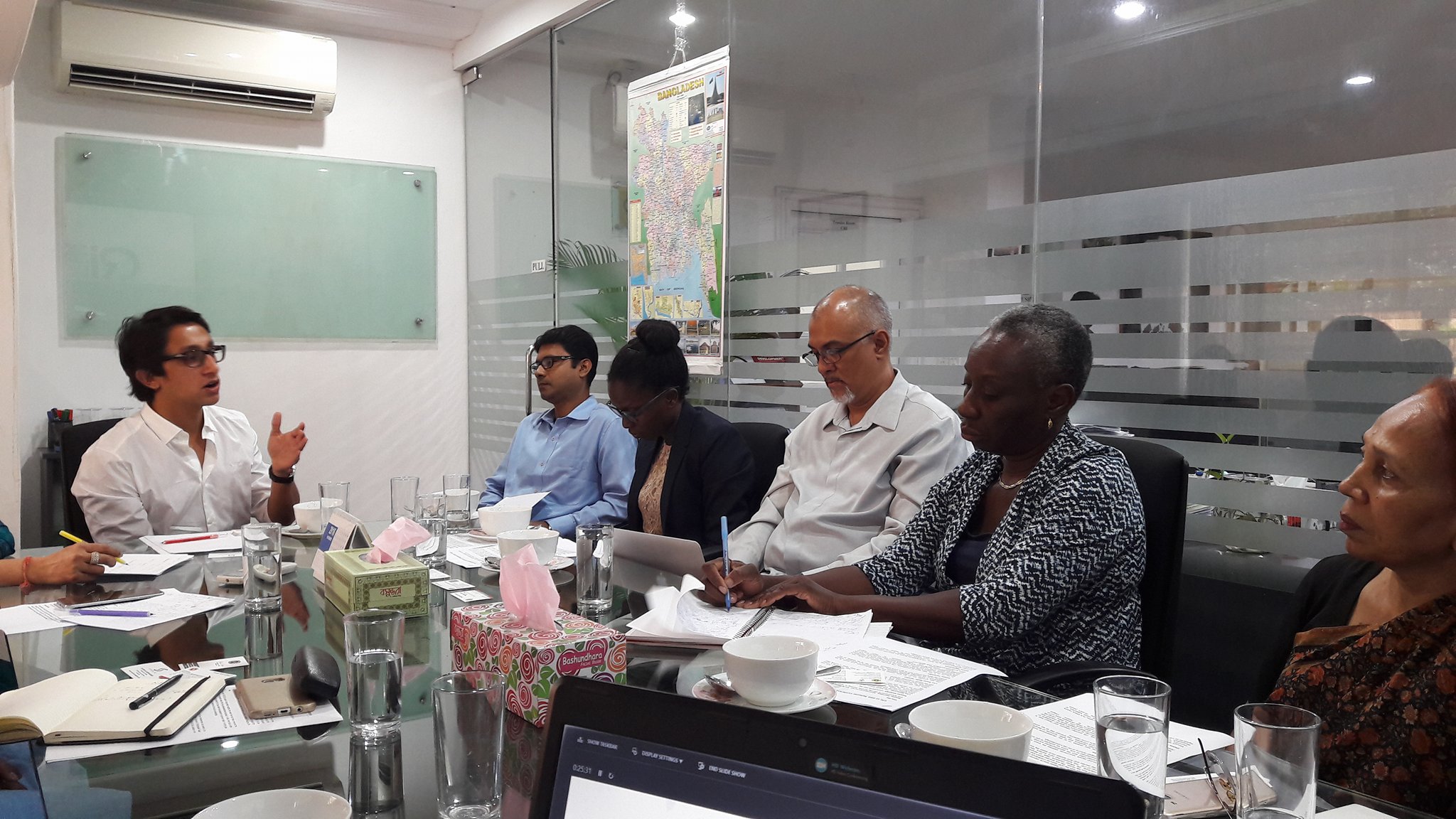 The meeting broadly involved discussions on politics, policies and youth engagement. The NDI delegation, some of whom had visited CRI before, were appraised of CRI’s activities regarding the recently concluded two-day 20th National Conference of Bangladesh Awami League. In particualr, they were shown a presentation on the various activities carried out by CRI to involve apolitical and non-political people and youth from a wide spectrum of the soiciety with the conference thorugh such intiatives as online engagement, high quality printed and electornic publications and materials, participation at the venue through dedicated booths and organizing a special “Let’s Talk with Bangladesh Awami League” at the conference venue. They were also shown the work CRI is doing regarding setting up and managing an eletronic election database of all elections held in Bangladesh to date and how this will help take electoral data analysis in the country to the next level.
The NDI delegation were highly impressed in particular to learn about CRI and its youth platform, Young Bangla’s, work with the youth of Bangladesh, and the specific initiatives to link them with politics, policymaking and national development processes such as the Vision 2021 Internship Programme which has so far secured public sector internships for more than 250 youth, a first in the country’s history. They also appreciated CRI-Young Bangla’s work with identifying, recognizing, showcasing and continually supporting the youth achievers and change makers from across the nation through its extended Joy Bangla Youth Award Programme. The delegation was also appraised of CRI-Young Bangla’s participation with private sector enterprises, such as the partnership with Microsoft Bangladesh which has so far resulted in 400 rural youth being trained in ‘Service Engineering’, 5 youth organizations receiving multimedia labs and 70 youth becoming brand ambassadors and interns.

Given CRI-Young Bangla’s extensive work with the youth of Bangladesh, the delegation were keen to learn about their thoughts on politics and future of Bangladesh. The CRI team answered those queries in light of the programmes being run by the organization specifically to bring politics and policymaking closer to the people, especially youth, such as Let’s Talk, Policy Cafes, Study Circles and Focus Group Discussions (FGDs). In short, the delegation was informed that CRI’s interaction with the youth of Bangladesh has shown consistently that the young people are quite informed, aware and conscious about political and dveelopment updates, not only in their own country but also internationally. While many may have reasons to be unhappy, more and more of them are taking the opportunity to contribute to political and national development from their own positions.

The delegation was told that CRI would continue in their endeavours to connect the youth with politics and development, and the NDI delegation in return, offered to help in any way they can to make such efforts bear fruit.