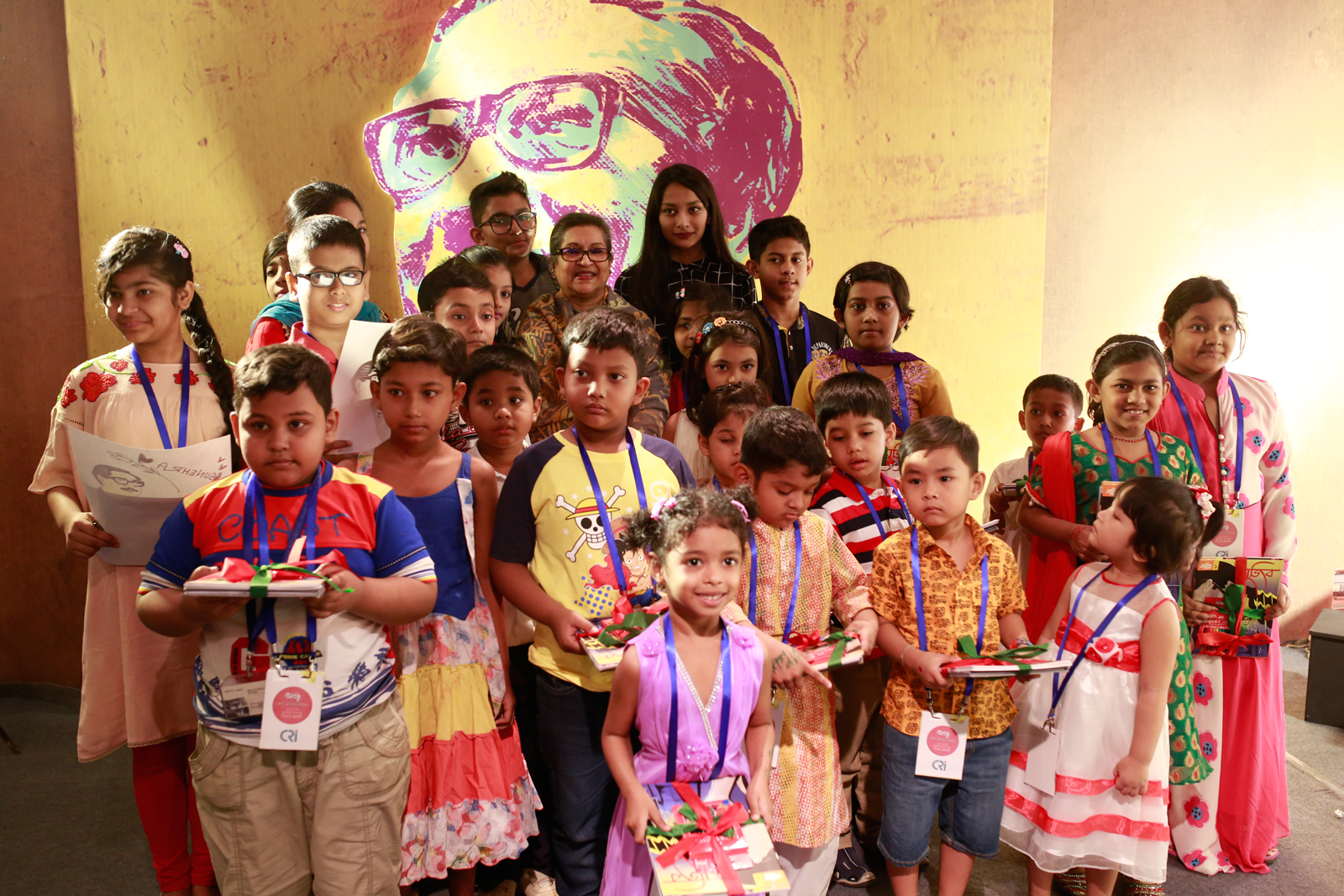 For the second year in a row, Centre for Research and Information (CRI) has organized an interactive event to mark the 97th birth anniversary of the Father of the Nation Bangabandhu Sheikh Mujibur Rahman and National Children’s Day at Bangabandhu Memorial Museum, Dhaka. This two-day programme (which ran today and will run tomorrow) features such attractive displays and installations as: a wall for painting Bangabandhu’s images by children, a segment for reading all three parts of the graphic novel series ‘Mujib’, a quotation wall on Bangabandhu, a photo booth where children could take their pictures with Bangabandhu and a cartoonist desk where four top cartoonists of the country are painting cartoon images of the children with the Father of the Nation.

There is also a screening room, where a documentary on Bangabandhu titled ‘Rahman: The Father of Bengal’ by Japanese filmmaker Nagisa Oshima and the coloured version of Bangabandhu’s 7th March speech is being screened round the clock. All children attending are being given complimentary copies of the graphic novel series, Mujib. The biggest attraction of the first day however, was a discussion session for children with the youngest daughter of the Father of the Nation Bangabandhu Sheikh Mujibur Rahman, Sheikh Rehana.

Talking to the children, Sheikh Rehana said: “When I was young like you, my father used to be in jail most of the times, fighting for the country”. She asked children who takes them to school, and when they replied their parents, she told them that she was not lucky as them. Most of the time she used to go alone, or her mother used to take her to school. In the exceptional times, when her father was not in jail, she used to urge him to take her to school. So, in those times, he used to pick her up from school on his way back from work. “That used to make me as happy as if it was Eid” she said.

She told the children about her life in the house in Dhanmondi Road 32. She said she used to play here. She was very young when her family came to this house, around 3/4 years. They used to play basketball and whenever her father was out of jail, they used to play badminton with him in the house. The whole family used to love to play badminton together. There used to be a lot of different kinds of flowers in their home. After reading the newspaper in the morning, they used to make necklaces out of the flowers, before going to school.
Bangabandhu used to take his morning walks all throughout Dhanmondi. She and her brothers used to join him only in the street of their house, and used to pretend that they too, had taken the whole walk around the neighbourhood. Because he was so rarely around, and spent most of his time in jail, whenever he was home, the children used to really enjoy talking to him, listening to his stories of jail, being fed by him and play with him.

She asked the children various information about Bangabandhu, such as where he was born, name of his parents. The children answered all these questions correctly. One of the child asked her whether her father used to beat her. She said, not only did he not ever beat her, he did not even have the habit of scolding her. But she said that her father had a stare, which used to make them realize that they have done something wrong. He used to love his children a lot. Amusingly she added that it was her mother who used to scold them for their transgressions.

Her father used to keep track of their education strictly though. Whenever he got the chance, he tested their skills in writing in English and Bangla, and maths such as multiplication tables. That used to make her and her siblings nervous. When he used to return home from work, no matter how late it was, he always liked to feed her with his own hands. Because she did not like to eat much when she was that young, she used to pretend to be asleep. But her father always knew when she was faking it.

Whenever after holidays like Eid, other children used to tell each other which shops they went with their fathers, that used to make her quite sad. One time, when he was home during such a holiday, she forced him to take me to New Market. She said that in those times, there were no big shopping malls like today. New Market was like a shopping heaven for them. She told him that he must buy her a new dress himself and a new doll so that she could show them to her classmates and friends. He did take her, and brought her an ice cream and a new dress. That evening, she and her siblings were so happy that it felt like they were flying in space literally.

She asked the children to know more about great personalities like Bangabandhu, and know about their trials and tribulations. To know about how to help people, to sacrifice for people and how to stand besides those who can’t help themselves. She hoped that the children would help their friends and parents at all times. She also asked them to study attentively and eat properly.