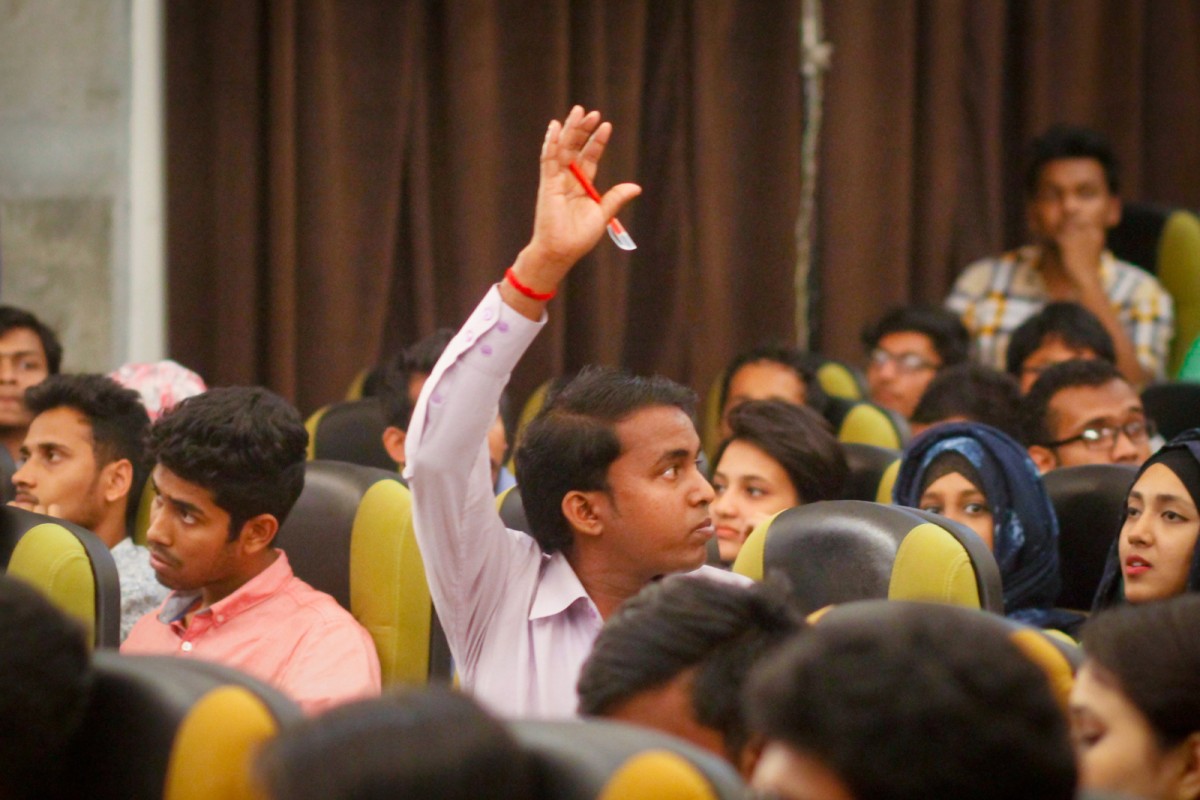 On 23rd March, 2017, Centre for Research and Information (CRI) organized a Let’s Ta!k with In the run up to the upcoming 136th Assembly of Inter Parliamentary Union (IPU) scheduled to take place in Dhaka.

For the ease of discussion, the event was divided into five segments: economic inequality, social & political inequality, governance and access to services, equality in law and policies and a rapid fire round.

Cashing on the opportunity to ask questions to the IPU President, Saber Hossain Chowdhury, the participants raised issues like urban poverty, wealth disparity, gender, community volunteerism, skilled labour force, internship opportunities in government bodies, incubation for start-up and education for physically challenged, national youth parliament, infrastructural development, disaster preparedness and many more. The panellists acknowledged the challenge in gathering the youth for discussion on national issues and were delighted with the questions they received from the enthusiast and knowledgeable young crowd. It became apparent from the discussions based on their queries and concerns how the young generation faced inequality in everyday lives whether it was financial, political and state policy or public service related. Mr Chowdhury, also a lawmaker, said while there are more young people in the world than ever before, creating unprecedented potential for economic and social progress, this demography constitutes only a handful of 2% lawmakers across the globe. He also stated that he the youth generating is grossly underrepresented in national politics and policy making, which is tragic considering what a large percentage of the population they make up. He recognised the need for participation of youths in politics and stated that unless we have more youths in policy making level, chances are very slim that the thoughts of youths get reflected in national policies and become youth centric. He believes that the youth acting as an agent of change in our society and would like to see them more active in political roles in the future. The suggestions regarding equality from this event will be presented at the IPU Assembly, he added.

The youth group raises concern over an array of topic ranging from the welfare of our blue collar workers, the disabled, the third gender to discrimination faced due to individual or community backgrounds. Some of the participants suggested that some of these inequalities may have resulted due to the lack of decentralised industries and services across the country. They expect to see vast developments nationwide, along with a stronger regulatory policy in the near future. They also raised concerns regarding Bangladesh’s vulnerability due to climate change and the absence of public polls or referendums before major changes in national policies. There were also common opinions among the crowd regarding a general dissatisfaction regarding the inconsistency in the quality of health and education sectors.

In reference to the queries raised the panellists explained that many of the issues raised could not be solved in the short term and many of them were already in the list of the government’s national agenda. The panel pointed out the progress made in terms of support provided to the agricultural sector, people’s welfare and steps taken for social inclusion. Barrister Shah Ali Farhad also said in reference to Britain’s equality act 2010 that focus should be laid out to enact such a law in our country to endow our citizens with legal right to lodge complaints after being faced with any form of discrimination– either from government or non-government institutions— in everyday life.