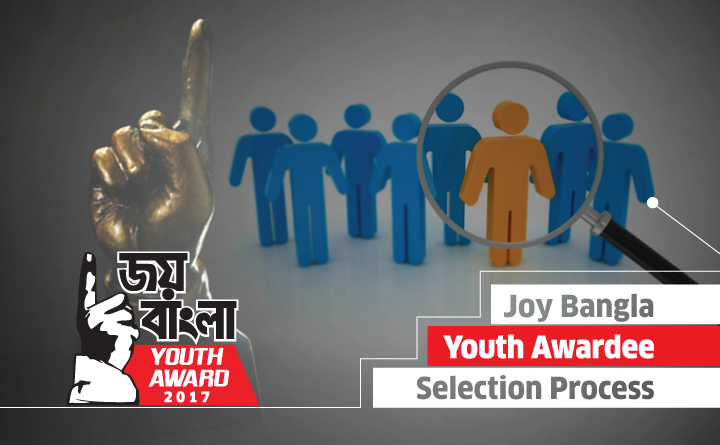 The call for application has been open since May 14, 2017. Since then a total of 8 divisional coordination meetings were held nationwide. Meanwhile, town hall and campus activation programs are in process and shall continue until late July.

Under Community Development, there are several sub-categories such as violence against women, disaster response, vulnerable communities, youth training and education, etc.
The selection process started with the promotion call at 8 Divisional Coordination Meetings with the Joy Bangla Youth Awardees and their networks. This was followed by meets at town halls at 56 Districts towns by district team led by these previous awardees and their network throughout the month of June. Promotional calls at campuses by district teams at 5 Institutions have been scheduled for July in eight divisional cities.
The primary selection of 200 based on location and categories will be completed in July. The first round of selection has been divided into the following sub categories:

1. Ten from stopping violence against children and women at community level
2. Eight from reducing any forms of cruelty and violence in society
3. Eight from preventing drug abuse among youth
4. Eighty-eight providing essential social services to

5. Sixteen from Implementing innovative programs enhancing youth employability
6. Sixteen from on disaster and climate risk reduction and/or sustainable environment management
7. Twenty-four from of sports or physical education activities for the youth

The primary selection will be a short listing of 200 from all application received. The second phase of the selection will bring down that number to 128 at a meeting with Joy Bangla Youth Awardees after Completion of Promotion and Selection of 200 by CRI and Young Bangla. This will be followed by the third round of selection where there will be 16 primary selections in each division against the 14 sub-categories. CRI and Young Bangla will then form 8 teams comprising of CRI staff and Joy Bangla Youth Awardees of 2015 and pay visits and document the works of all these 128 applicants to select 8 from each divisions (64 nationwide). The third round of selection will conclude with the evaluation team forming a shortlist of the top 64 applicants. On the basis of documentation top 32 will be selected and participate in 2 Workshops. The final selection after the workshops will selected 32 JBYA 2017 awardees in Dhaka will be held to finalize their terms of reference and Fellowship; Awardees profiles and Project Proposal will be developed. Finally, the award function will be held in Dhaka in the last week of October, 2017.