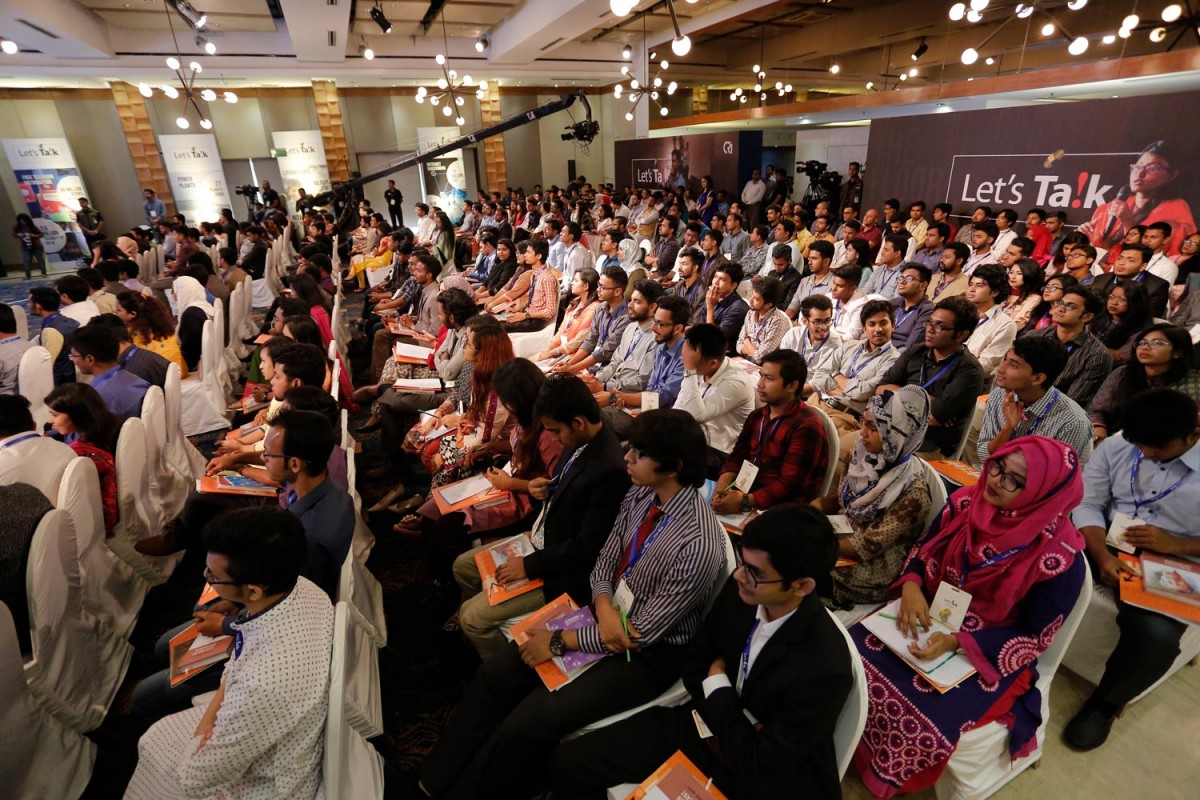 This session of “Let’s Talk” was divided into three segments – Bangladesh Graduation from a Least Developing Country (LDC) to a Developing Country (DC), Digital Bangladesh, Youth Development and Contemporary Bangladesh. Similar to the previous “Let’s Talk” sessions, this event also aimed to facilitate open dialogues between a top politicians or policymaker and members of the young generation to share their views on national development.

The Participants
The participating audience consisted of 270 young people from diverse backgrounds who engaged in this important discussion on public affairs. These youths included university students, young professionals, young entrepreneurs, members of different university social clubs and 50 members of the Young Bangla network. Before the main event, CRI organized a focus group discussions (FGDs) with 60 participants, to prepare the younger audiences for the topic by imparting the necessary lessons and pre-event studies.
The program started with the moderator Abdun Noor Tushar asking some questions collected earlier from the FGD. Several youths expressed their concerns that the developments in the country are no real and are only on paper, and he asked what his opinion was on the Least Developed Countries (LDC) to Developing Countries (DC) graduation. The DC graduation is a spectacular achievement as Bangladesh is among the only 5 countries that fulfilled all the requirements ever since the United Nations introduced the criteria. The signs of development and increasing income is very much visible in every society. However, it is not possible to satisfy everyone and unfortunately there will always be some critics who can never rejoice the prosperity and development of their nation.

Another common concern was the decline of foreign aid due to the LDC status and the nation’s ability to repay foreign loans in the future.
Mr. Sajeeb Wazed responded saying ”Bangladesh does not want donations”. He said he does not see this as a challenge as Bangladesh no longer require foreign aid for development as we are focused on increasing incomes and standards of living. He said that he does not see this as a challenge. The foreign donations currently supporting the NGOs in the form of ‘development assistance’ would be unnecessary when Bangladesh becomes a developing country as there will be no need for the services they are offering. We want the income to increase. We are the 38th largest economy in the world. The GDP has increased; in fact it would have been higher but we have a large population. Currently, 95% of Bangladesh’s national budget comes from internal revenue streams while foreign loans only consist of only 5%; while for many countries, it can be as high 85%. We would not suffer due to the decrease in foreign aid. We want investments, not donations.

One of the youth audience asked a question, “we are currently seeing the country taking on huge infrastructural developments. Is this sustainable in the long run?”
Mr. Sajeeb responded saying that the largest and the most expensive development project – the Padma bridge is being built using the nation’s own finds. Our earning is now higher than some European countries, but they benefit from having a smaller population size.

He also answered questions on the process taking place to bring the entire country under the ‘Digital Bangladesh’ umbrella.

Joy encouraged youths to change their “mindset” and become entrepreneurs rather than traditional job-seekers. On being asked, he said the Awami League government has established “good governance” in Bangladesh, and strengthened the Anti-Corruption Commission, citing instances of ruling-party MPs landing in jail. He also said the Awami League does not fear criticism but “loves to respond to any criticism”.

Speaker Sajeeb Wazed also shared some of his personal insight and stories when asked by the moderator and the participating youths.