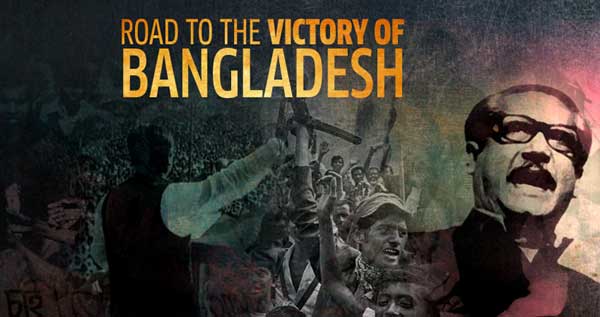 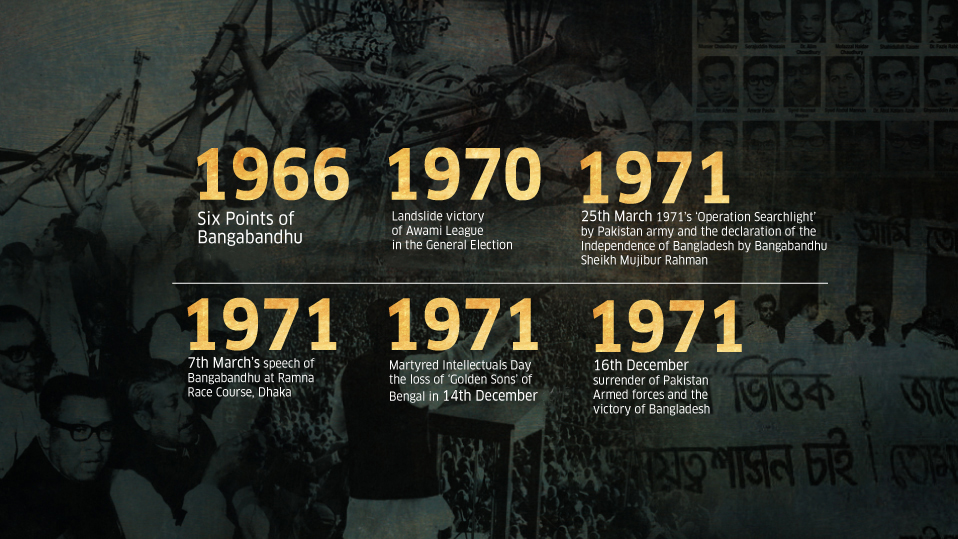 The 1965 Indo-Pak War came as an eye-opener for the Bangalees. During the War, East Bengal became completely isolated from the rest of the world. This prompted Bangabandhu Sheikh Mujibur Rahman to put forward his historic ‘Six Points’ in 1966, which in effect laid the foundation of East Pakistan’s future independence. President Ayub Khan declared the 6-point as ‘secessionist soon after the programme has been published. Bangabandhu was arrested eight times in the first three months of the 6-point movement. By then, Bangabandhu had become the President of Awami League. He was finally thrown into jail based on a so-called Agartala conspiracy in January 1968, but released soon after which proven that the charges were baseless.

In the first general election after the partition, The Awami League won a landslide victory by winning an absolute majority of 167 seats out of 313 seats at the National Assembly election in Pakistan.

The then West Pakistan was not ready to accept the result of general election. General Yahya Khan postponed National Assembly meeting which inflated a huge protests in East Pakistan as Mujib launches a ‘non-violent non-cooperation movement’.

The declaration of the independence of Bangladesh
In 25th March 1971 Pakistan army launched Operation Searchlight in East Pakistan and went into a spree of killing at Dhaka city specifically in Dhaka University, the headquarters of the East Pakistan Rifles and the Rajarbagh police lines.

Bangabandhu Sheikh Mujibur Rahman declared the independence of Bangladesh, minutes after midnight just before being arrested by the Pakistan army and taken to Dhaka cantonment, whence he will be flown to West Pakistan a few days later.

Bangladesh government prepared Mukti Bahini by dividing the country into eleven sectors and waged guerrilla warfare against the Pakistan occupation army. Over the next couple of weeks, Indian and Bangladesh forces formed a joint military command in 3rd December, blows on the Pakistan military in occupied Bangladesh.

Birth of a nation
Near to surrender to allied forces on 14-15th December 1971 local collaborators of the Pakistan occupation army, Al-Badr and Al-Shams, Rajakars killed and tortured the golden sons of Bangladesh to death at various points in Dhaka and their bodies were then dumped on the brickfields of Rayerbazar.

In 16th Decmber 1971, 93,000 Pakistani military officers and soldiers surrender with their commander Lt. Gen. A.A.K. Niazi to the Indo-Bangladesh Joint-Command at the Race Course in Dhaka.
After a nine months war of liberation and with the sacrifice of three million lives the People’s Republic of Bangladesh was born in 16th December 1971.