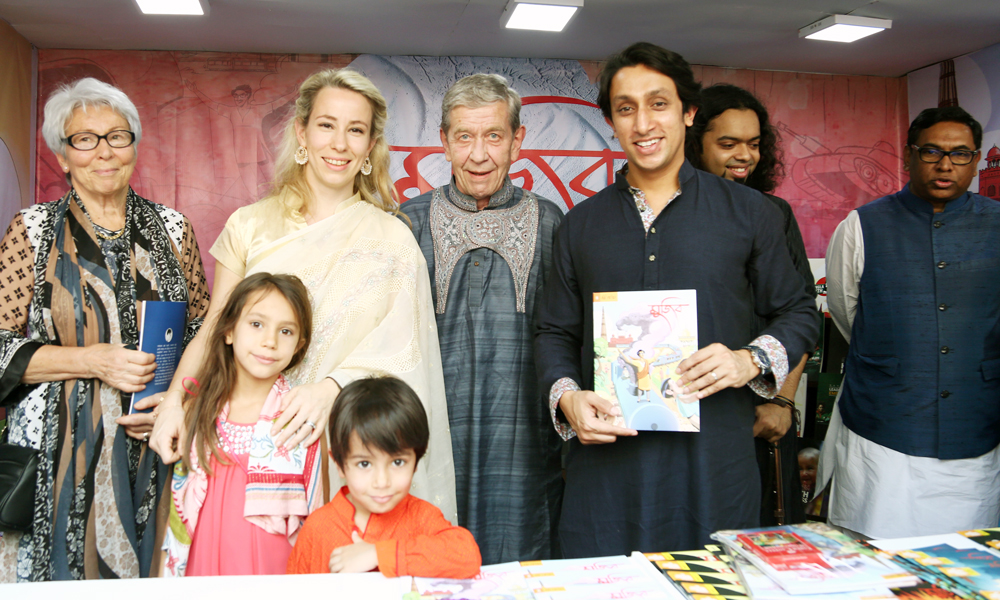 The much awaited part 4 of the graphic novel series on Bangabandhu Sheikh Mujibur Rahman was unveiled today, on 17th February, at the Amar Ekushey Book Fair 2018. The Centre for Research and Information (CRI) is organized the launching ceremony of graphic novel ‘Mujib-4’ around 12pm, on the Bangla Academy premises.

CRI trustees Radwan Mujib Siddiq and State Minister for Power and Energy Nasrul Hamid were the present at the ceremony which was graced by over 50 children. They all received gift sets and of free copies of the fourth part of the ‘Mujib’ graphic novel series which Mr. Radwan and Mr Hamid handed over to the children.

The newest part of the graphic ‘Mujib-4 Delhi Adventure’ tells the story of Bangabandhu’s journey to and from Delhi to Calcutta. Its highlights Sheikh Mujib’s experience attending the then Muslim League’s annual conference and the meeting between Hussain Shaheed Suhrawardy and himself, along with his fellow Chatra League activist.

The previously released Mujib-3 highlights the post-World War II period of the life of Bangabandhu Sheikh Mujibur Rahman, during which he emerged as a rising politician and successful organizer despite many obstacles. Mujib – 2 of the series, covers the political rise of Bangabandhu and his growing ties with his political mentor Shaheed Suhrawardy along with an important football match between the young Mujib and his father. Mujib – 1 portrayed the childhood of Bangabandhu and how he got involved in politics. It also shows how he earned the title of Bangabandhu and raised his voice to demand the independence of Bangladesh.

The entire graphic novel series is based on the “The Unfinished Memoirs” of Bangabandhu, written during his incarceration. This is being presented in 12 parts of the graphic novel series in an initiative mainly aimed at raising keenness among children and teenagers to learn about the Father of the Nation Sheikh Mujibur Rahman and the nation’s history. CRI plans to release eight more parts of the series in turn (in total it is a 12-part series).

Part-1 of the series was published by CRI on March 17, 2015 on the 96th birth anniversary of the Father of the Nation and the National Children’s Day on March 17, 2015. While the second part was unveiled at the Amar Ekushey Book Fair on February 13, 2016 and the third part on 19th February 2018, also at the book fair. A translated English version of the series has been released for non-Bangla speaking audiences at the Lit Fest in 18th November 2017. The English version for part 2 of the series and a Japanese version of part 1 is now underway.

For the remaining duration of the fair, all four parts of the series would be available for purchase at CRI’s stalls (No. 100/19). Other than the fair, the series is also available year-round at Charchabooks (http://charchabooks.com.bd; Mobile: +88 01935194316, 01826018665) and also online via Rokomari (https://www.rokomari.com). Moreover, the graphic novel is also available at Pathak Shamabesh Centre at National Museum premises, Kak at Concord Emporium in Katabon, Madal at Panthapath, Batighar in Chittagong.

Hasina A Daughter’s Tale Screening at University of Liberal Arts