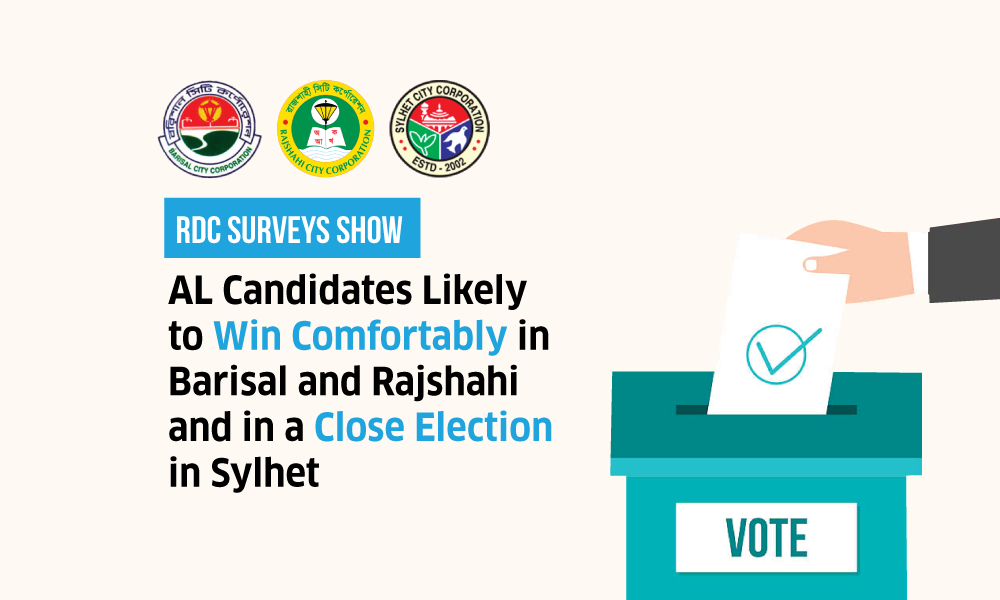 According to public opinion surveys conducted by the independent research organization Research Development Center (RDC), and commissioned by Bangladesh Awami League (AL), candidates fielded by AL in the imminent city corporation mayoral elections in Barisal and Rajshahi are likely to win by comfortable margins, and by a closer margin in Sylhet. All three separate surveys were conducted throughout July 2018.

Barisal
When asked about voting, the Awami League (AL) candidate Serniabat Sadik Abdullah received 44.0% of the votes while the nearest candidate Bangladesh Nationalist Party (BNP) Mujibur Rahman Sarowar 13.1%. Other candidates received only 0.8%. The undecided respondents were 23.5% and the refused to answer respondents were 15.9%. More than 90% of the total last two categories would have to vote for the BNP candidate to make the election a close one. Hence, it appears that the AL candidate is in a very strong position to win this mayoral election comfortably.

Sylhet
When asked about voting, the AL candidate Badar Uddin Ahmed Kamran received 33% of the votes while the nearest candidate BNP Ariful Haque Chowdhury received 28.1%. Other candidates received only 1.3%. The undecided respondents were 23% and the refused to answer respondents were 12.6%. While the numbers on their face suggest that the AL candidate is ahead, nonetheless, this election seems to be headed for a tighter fight than the other two.

Technical Note:
The sample sizes of the surveys were 1,241, 1,294 and 1,294 respectively in Barisal, Rajshahi and Sylhet respectively. Results were weighted for gender based on the composition of the voter list for the City Corporations and age distribution for Barisal, Rajshahi and Sylhet Cities from the 2011 Census. Sample was drawn from the addresses registered with the Election Commission through the voter ID registration. Persons included were only individuals who confirmed that they were on the voter list of the City Corporations. Error rate is estimated to be +/- 2.5%.