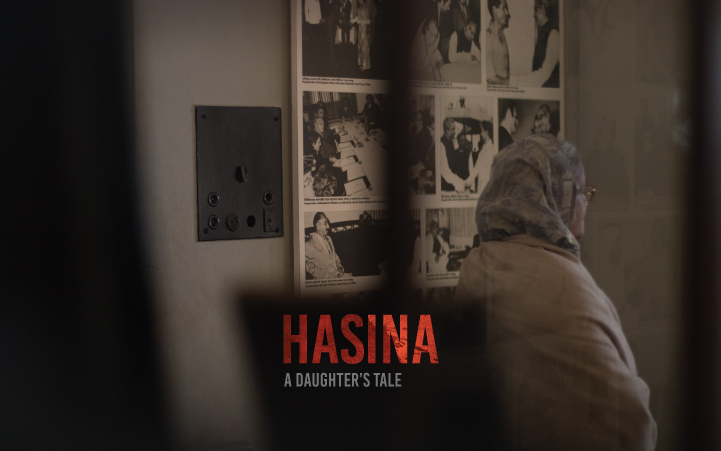 ‘Hasina: A Daughter’s Tale’, is a docu-drama, based on Prime Minister Sheikh Hasina – the daughter of Bangabandhu Sheikh Mujibur Rahman, tells a riveting story of a daughter emerging out of a tragic backdrop. This project was a collaboration initiated jointly by Centre for Research and Information(CRI) and Applebox Films’ founder & director Rejaur Rahman Khan Piplu.

This biography based documentary tries to capture a riveting story of Prime Minister Sheikh Hasina out of a tragic backdrop. It demonstrates the captivating story of the Premier with layered interpretation of her tragedies and triumphs. Dramatically, yet honestly, the documentary progresses to portray a daughter, a leader, and ultimately a person along with her multiple facets and her journey associated with the genesis of Bangladesh.

It took the team almost five years to complete this project with the first couple of years being spent on orientation, reading, learning and planning. The script was written in a manner that layers and unfold incidents of thrills, anecdotes, tragedy and trauma. The documentary both dramatically, yet honestly illustrates the story behind the Prime Minister and her experience as human being, not a politician.

The trailer opens with a monologue from Sheikh Rehana, the sister of the Prime Minister, as she speaks of a dream filled with darkness and sorrow. “Sometimes I wish everything was a dream,” she says, referring to the bloodbath of August 15, 1975 when Bangabandhu Sheikh Mujibur Rahman along with most of his family members was brutally murdered.

Here Sheikh Hasina has been depicted as a persona who actually connects the most with the history and inceptions of Bangladesh. The filmmaker’s intention throughout the process was to convey the story in an authentic manner, unmarred by any influence which can be open to independent interpretation. Besides the history, the filmmaker sought to showcase as the uncanny and unusual sides of one of the most iconic figures of our time.

The documentary tries to convey the story in an authentic manner, unmarred by any influence, by creating a tale that has immense appeal for a wider audience sitting at home or abroad who are willing to understand and relate to Bangladesh more closely.

The trailer for ‘Hasina: A daughter’s tale’ was released on 27th September 2018, the day before the Prime Minister’s birthday and the film is scheduled to release very soon . Directed by Rejaur Rahman Khan Piplu, the 70-minute docu-drama was produced by CRI while Sadik Ahmed acted as cinematographer, Navnita Sen as Editor and Debojyoti Mishra as music director.

Road to the victory of Bangladesh