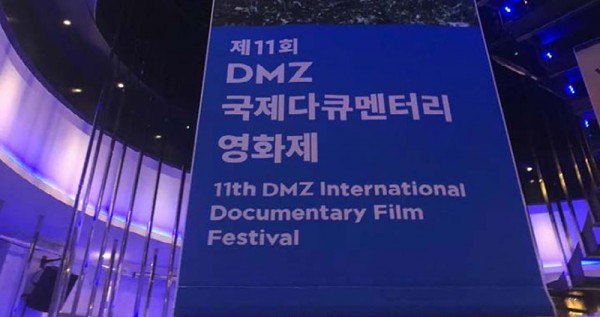 Hasina: A Daughter’s Tale – was selected for screening at the prestigious DMZ International Documentary Film Festival, under the Global Vision category in South Korea, on 21st September 2019. The initial screening was followed by a special discussion session – ‘Bangladesh Night’ organised by CRI at the festival venue. CRI Trustee Nasrul Hamid and the film director Piplu R Khan were present at the event. A second screening of Hasina: A Daughter’s Tale was held on 23rd September 2019. Festival organizers and local audience including students from several universities were in attended the screening. The Bangladesh Embassy in South Korea also arranged a separate screening of the film for the diplomatic community at Seoul on 22nd September 2019. Ms Abida Islam, Bangladesh’s Ambassador to South Korea, was present at the occasion along with Chairman of Youngone Corporations Mr. Kihak Sung and Honorary consular of Incheon Mr. David Kim were present there. After the film’s release in 2018, the docu-drama has continued to inspire nations around the world, receiving rave reviews in the international film circuit. Hasina – A Daughter’s Tale has been selected for several prestigious international film festivals throughout 2019. It was screened earlier at the Durban Film Festival in South Africa and at Jagran Film Festival, one of the largest travelling film festivals, held in India. It was also screened at the Indian Film Festival of Melbourne in Australia this August and at the Jaffna Cinema Festival in Sri Lanka between 3rd and 9th September. The documentary drama is currently scheduled to be screened at the Barcelona Asian Film Festival in Spain during October and November, 2019. About the Festival DMZ International Documentary Film Festival, also known as DMZ Docs, launched in 2009, is a South Korean film festival for documentary films. In last 10 years, DMZ Docs has grown to become one of the leading and dynamic documentary film festivals. It endeavors to look at the trends of contemporary documentary films and discover the future leading documentary filmmakers. This festival echoes the values of peace, life and communication, through documentary films and has grown into a documentary festival representing Korea and Asia over the past decade. This year’s documentary film shows quantitative and qualitative growth. A total 64 short films were introduced in this year including Hasina: A Daughter’s Tale. Hasina A Daughter’s Tale Hasina: A Daughter’s Tale is a historical docudrama that covers the assassination of Hasina’s father Sheikh Mujibur Rahman along with most of her family member in 1975. The docu-drama narrates the aftermath of the barbaric assassination of the Father of the Nation, Bangabandhu Sheikh Mujibur Rahman and his family, and the incredible story of his daughters, Sheikh Hasina and Sheikh Rehana, and their determination to fulfill their father’s dream. The film revolves around the Prime Minister Sheikh Hasina and her sister Sheikh Rehana as they recall memories from their early life back in Gopalganj’s Tungipara and progresses on to accounts from their life in exile in Europe and India during the aftermath of the assassination of her father and family. This is followed by intimate detail of her return to Bangladesh in the 80s, her fight for democracy during Ershad’s presidency, her loss in the 1991 polls, constantly put under house arrest afterwards as well as the several assassination attempts on her life. Bangabandhu’s grandson and Centre for Research and Information (CRI) Trustees – Radwan Mujib Siddiq and State Minister for Power, Energy and Mineral Resources Nasrul Hamid produced the docu-drama. A team of international personalities have also collaborated, including cinematography by Sadik Ahmed and editing by Navnita Sen. The film’s soundtrack and background music was composed by Debojyoti Mishra, an internationally acclaimed Indian music composer. Hasina a Daughter’s Tale was released on 16th November 2018 at the Star Cineplex in the capital’s Bashundhara City mall. The film was also run Blockbuster Movie in Jamuna Future Park, Modhumita Cinema Hall at Motijheel in Dhaka, and Silver Screen in Chattogram. “Here, she is not the head of the state. She is a scared child recollecting the unjust murder of her father, her harrowing journey into exile, and her patient pursuit of justice. Remove all legacy, all politics, all dynamics, you are left with a personal story. A redemption. A triumph. An antidote to revenge and hatred. Personally, I still marvel today, how the person Sheikh Hasina, could live with the fact that 21 of her family members were brutally murdered. Including children, who did not have anything to do with politics. And yet, some of her father’s killers are still breathing freely.” State Minister for Power Energy and Mineral Resources, Nasrul Hamid at the special discussion session – ‘Bangladesh Night’ organised by CRI Audience Reaction to ‘Hasina A Daughter’s Tale’

“In the official selection of the film Hasina: A Daughter’s Tale’ in this year edition of DMZ Documentary Film Festival was a great discovery for the Korean audience. The film has opened up a past truth about the Mujib family in a very humane way.

“15th August is a very important day for South Korea as both Koreas got victory over Japan on this day. But I never knew 15th August has such a dark history for the Bangladeshi people. I discovered the word ‘Bangabandhu’ and its meaning was so enlightening ‘Friends of Bangla’! This word truly represents a leader’s connection with its people. But the terrible event that happened to Bangabandhu’s family was shocking and discovering its connection to South Korean National Liberation day gave me a new perspective to look in to Bangladeshi political history. Watching this documentary, I can feel the trauma the both sisters went through. It is a courageous attempt to depict a very humane side of a powerful leader like the current Bangladeshi Prime Minister. Good Job!

“We do not usually receive many Bangladeshi entries usually in the festival. So, when I encountered the documentary ‘Hasina: A Daughter’s Tale’ I initially thought it might be like many other typical documentaries about the national leaders, where you see their rise and activities, usually from a very subjective point of view. But this documentary was a true depiction of two sisters’ pain and sufferings after their entire family was killed. You feel their pain as a daughter. I think this is where the film stands out from many other. A very good entry for our Global vision section this year.

“As a student of History my thesis has extensive study and understanding about South Asia. The history that I knew about Bangladesh has been cleared and in some extent my understanding about the political scene in Bangladesh after its independence was a new discovery due to this film. I am inspired as a woman by the both sisters and their journey in the political scene of the country after the assassination of their family. Very eye opening Bangladeshi history, I encountered through this film.

“Before I watched this documentary, I hardly knew about the Bangladeshi history and its brutal past. It reminded me of the murder of the Romanov family in Russia in 1918. I felt so sad for the innocent lives who were executed 44 years ago and the pain the both daughters went through afterwards. This documentary was really well crafted to define this history for any general audience, who like me has little knowledge about the Bangladeshi history.

“I knew this history already. But hearing it from the both sisters on their own statement really made me feel sad for them again. The loss of entire family and then surviving in a patriarchal political scene in Bangladesh the both sister’s journey is remarkable. I would definitely encourage my Korean colleagues to watch this again.

“You can see the true past of the Honorable Prime Minister Sheikh Hasina’s family and the effort both daughters’ made to bring Bangladesh at this stage after their father’s assassination. Very remarkable piece of work.