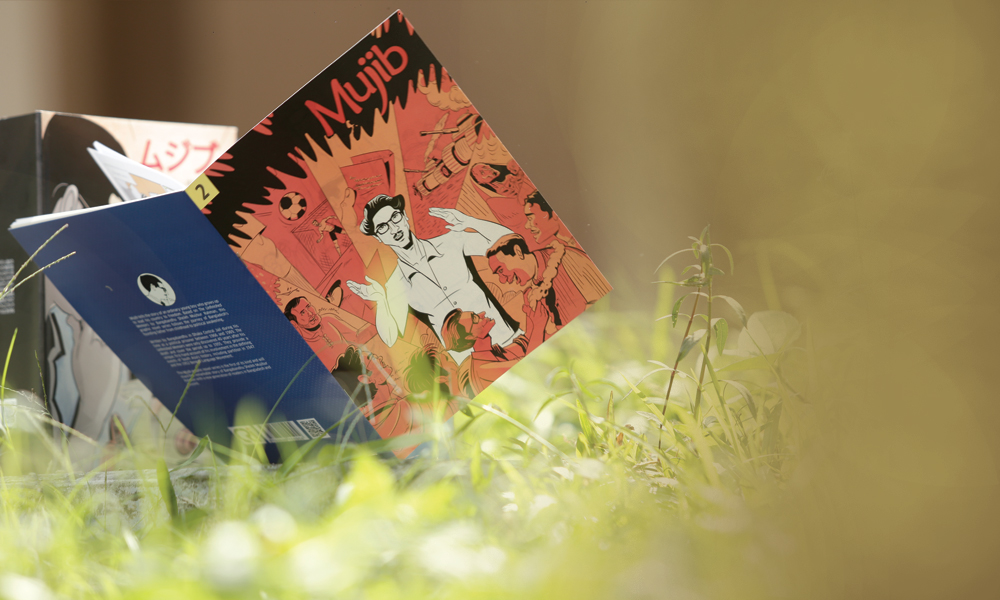 Centre for Research and Information, CRI is going to take part at Dhaka Lit Fest 2017 from 8th to 10th November at Bangla Academy in Dhaka.

A stall has been set up exclusively for the ‘Mujib’ Graphic Novel series. Currently available in 5 parts of the 12-part graphic series of CRI is available in Bangla. A translated English version of the series has been released for non-Bangla speaking audiences at last year’s Lit Fest in 18th November 2018. This time, the translated versions of part 2 and 3 are being released for the first time at this year’s Lit Fest.

Both the Bangla versions of ‘Mujib’ along with the English one will be available for the buyers at the designated corner of Mujib Graphic Novel stall of Bangla Academy premise at Dhaka Lit Fest 2017. Meanwhile translated Japanese version of part 1 of the series is set to be released in Tokyo on 26th November 2018.

The entire graphic novel series is based on the “The Unfinished Memoirs” of Bangabandhu, written during his incarceration. This is being presented in 12 parts of the graphic novel series in an initiative mainly aimed at raising keenness among children and teenagers to learn about the Father of the Nation Sheikh Mujibur Rahman and the nation’s history. CRI plans to release seven more parts of the series in turn.

A new publication by CRI on the 100 quotation of the Father of the Nation Sheikh Mujibur Rahman titled “Bangabandhu Udruti” is also being released at the year’s Lit Fest. This book contains the Father of the Nation’s quotes on his many political philosophy, his thought on Bangladesh as an independent state, his visions on developing Bangladesh, the 1971 liberation war as well as the post war era of Bangladesh long with his thought on literature and culture.

The ‘Mujib’ Stall of CRI at Dhaka Lit Fest will also feature “Unique Glimpses” which is compiled and edited by Saima W. Hossain, to showcases a powerful art collection created by unique young artists. These artists have been heavily encouraged by the Hon’ble Prime Minister of Bangladesh Sheikh Hasina, and befittingly, she wrote the foreword in the book. All proceeds from the sale of this book will be donated to the welfare of persons with disabilities.

For the remaining duration of the fair, all four parts of the series would be available for purchase at CRI’s stalls (No. 100/19). Other than the fair, the series is also available year-round at Charchabooks (http://charchabooks.com.bd; Mobile: +88 01935194316, 01826018665) and also online via Rokomari (https://www.rokomari.com). Moreover, the graphic novel is also available at Pathak Shamabesh Centre at National Museum premises, Kak at Concord Emporium in Katabon, Madal at Panthapath, Batighar in Chittagong.

CRI at Seminar on Autism by ICDDR,B and DGHS

Mujib-2 to be unveiled on February 13