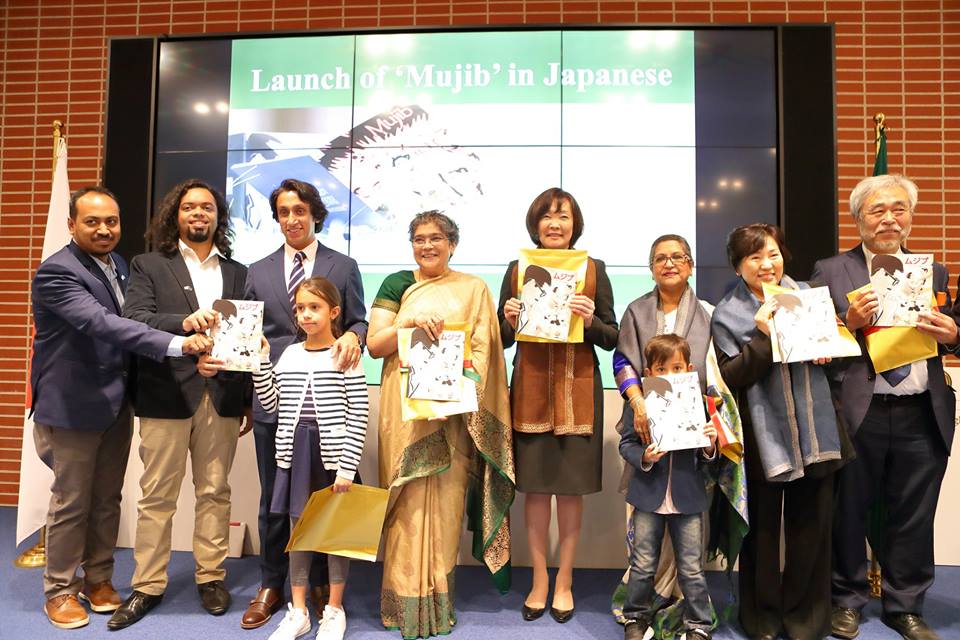 Ms. Akie Abe, spouse of the Japanese Prime Minister, unveiled the cover of the Japanese version of graphic novel ‘Mujib’ together with Ms. Toshiko Abe, State Minister for Foreign Affairs, Sheikh Rehana, daughter of Bangabandhu Sheikh Mujibur Rahman, Mr. Radwan Mujib Siddiq, publisher of ‘Mujib’, and Bangladesh ambassador to Japan Ms. Rabab Fatima in a festive ceremony held on 26th November at the Embassy of Bangladesh, Tokyo. The launch ceremony was also attended by ambassadors, members of the diplomatic community, high officials of the Japanese government, representatives of the business community, members of civil society, media and expatriate Bangladeshis in Japan.

In her welcome address, Ambassador Rabab Fatima mentioned that Japanese is the first foreign language after English to which this graphic novel had been translated to, and she hoped that this publication would introduce Bangabandhu to the Japanese children and help them understand his lifelong struggle to achieve freedom for his people. She said, that the publication reflects the deep bond between Bangladesh and Japan, and would contribute to fostering greater cultural exchange between their two peoples.

Chief Guest Ms. Akie Abe highly lauded the translation initiative and hoped that children of Japan will be able to know Bangladesh’s founding Father Bangabandhu Sheikh Mujibur Rahman through this graphic novel. She also praised the leadership of Bangabandhu in liberating Bangladesh and in rebuilding the country. She commended the leadership of Prime Minister Sheikh Hasina and appreciated Bangladesh’s miraculous achievement under her prudent leadership. Mentioning the deep friendship and trust between Bangladesh and Japan, she said that the root of bilateral relations between the two countries was founded by the Father of the Nation Bangabandhu Sheikh Mujibur Rahman.

State Minister for Foreign Affairs Ms. Toshiko Abe also resonated Ms. Akie Abe’s sentiments and commended the effort of translating the graphic novel into Japanese. Highlighting the deep compassion that Bangladesh Prime Minister Sheikh Hasina showed to the refugees from Myanmar, she mentioned that Bangladesh is now the symbol of humanity and humanitarian efforts. She recalled on an emotional note the gesture of generosity of Prime Minister that the people of Bangladesh would share their meals with the Rohingya refugees from whatever they have.

Mr. Radwan Mujib Siddiq, publisher of “Mujib”, thanked the Bangladesh Ambassador for undertaking this project. He also thanked the Japanese audience and hoped that the publication would help the Japanese children to know more about the history and the Founding Father of Bangladesh.

A timeline video on the life Bangabandhu’s life was screened in the program.

Mr. Masaaki Ohashi and Mr. Imran Sharif, the translators of the graphic novel into Japanese, were presented with crests for their valuable contribution.

Reading sessions of the Japanese translation of the graphic novel ‘Mujib’ were held at two prestigious schools in and around Tokyo and received very positive response from the Japanese children.

The graphic novel series is, originally a publication by Centre for Research and Information (CRI) which was created by Rashad Imam Tanmoy and edited by Shibu Kumer Shill.

Joy Bangla Concert 2019: 5 Years of Rocking with the Spirit of 7th March