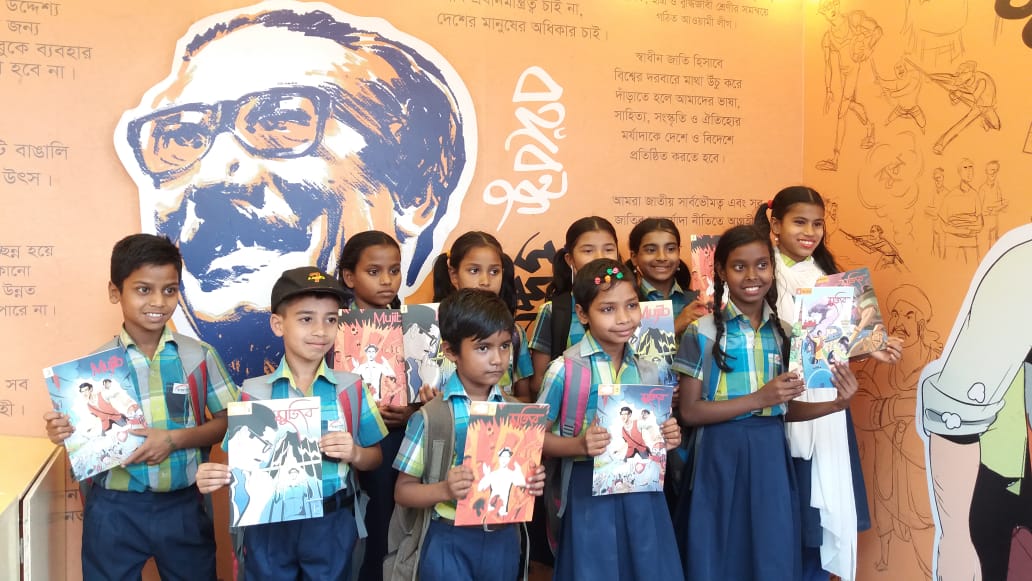 Centre for Research and Information (CRI) participated at the Amar Ekushe Book Fair 2019, a month long book fair hosted by Bangla Academy at Bangla Academy premises in the month of February commemorate the spirit of language movement of 1952.

The ‘Mujib’ graphic novel stall (no 100/8, 100/9) had been set up exclusively for the ‘Mujib’ Graphic Novel series and featured several displays, cut out and decorative walls that contained scenes from different parts of graphic novel ‘Mujib’. ‘Mujib’ graphic novel series based on the ‘Unfinished Memoir’ of the Father of the Nation Bangabandhu Sheikh Mujibur Rahman, was initiated to sensitize and educate the young children about the Father of the Nation. The colorful graphic illustration and visualization used in the ‘Mujib’ series was done to make the publication children friendly. Currently available in 5 parts of the 12-part graphic series of CRI is available in Bangla. The first three parts of a translated English version of the series was also available for non-Bangla speaking audiences while the translated Japanese version released in Japan last year was on display.

A new publication by CRI on the 100 quotation of the Father of the Nation Sheikh Mujibur Rahman titled “Bangabandhu Udruti” which was released last year. This book contains the Father of the Nation’s quotes on his many political philosophy, his thought on Bangladesh as an independent state, his visions on developing Bangladesh, the 1971 liberation war as well as the post war era of Bangladesh long with his thought on literature and culture.

Like every year, this year the ‘Mujib’ stall attracted groups of enthusiastic crowd consisting of children, youths and graphic novel lovers alike.