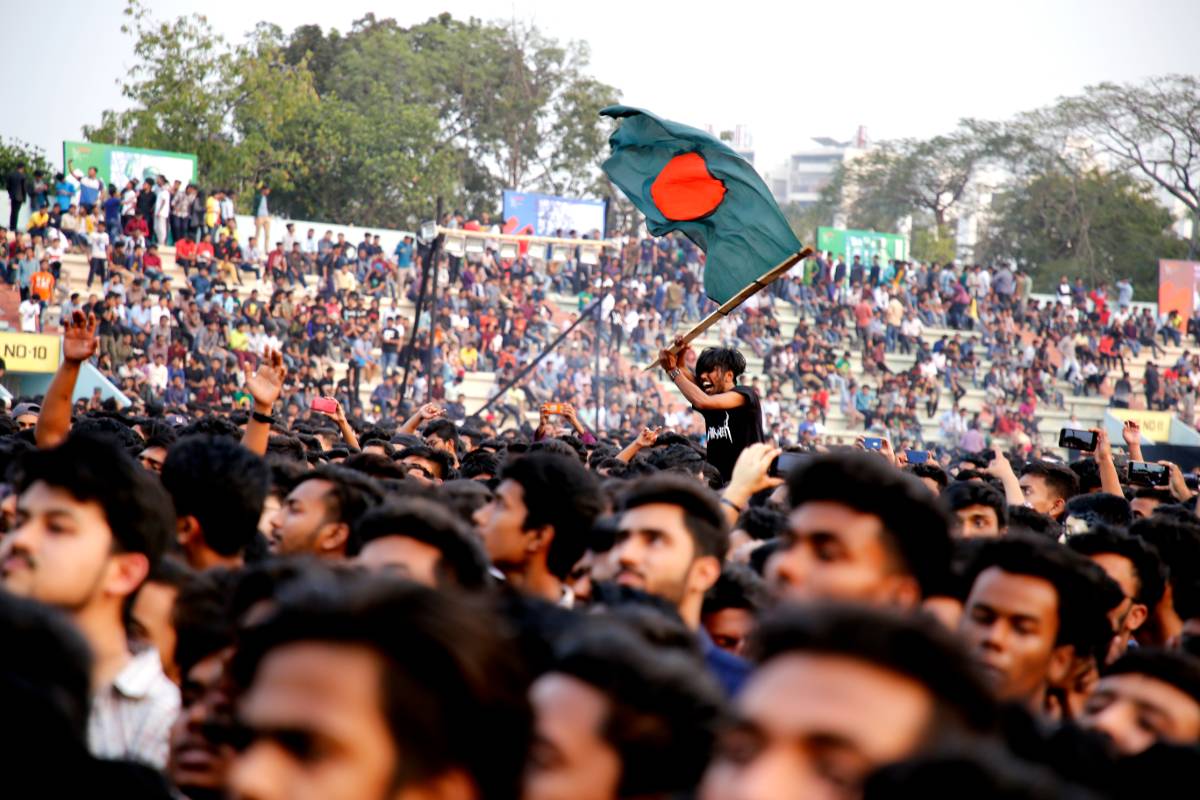 Music has been an essential part throughout the history of Bangladesh. For the people of Bangladesh, music is an emotive entity that demonstrates passion, joy, courage, anger, dream, love and sacrifice. Rock music is known for speaking the language of youth and their enthusiasm, sentiments, and energy are expressed through rock music.

Young Bangla as the youth platform of the Centre for Research and Information (CRI) ties up with the youth of Bangladesh through a musical extravaganza with a notion of connecting the bridge between youth and the history of 7th March. The Joy Bangla Concert since 2015 is more than just a musical event; it is a memorandum of hope to all young souls and a chance to relive the spirit of freedom, patriotism and the historic 7th March speech of the Father of the Nation – Sheikh Mujibur Rahman. The world also recognizes the electrifying effects of that speech, which is now officially a world documentary heritage, having been inducted in the “Memory of the World Register” by UNESCO in 2018.

Young Bangla-CRI organizing the Joy Bangla Concert for the fifth consecutive year has now become a household name in the youth community and attracted the largest crowd hitting the records with nearly 35,000 visitors. Apart from the massive crowd, several million people at home and abroad watched the event live on several satellite TV channels and Young Bangla’s Facebook and YouTube with over 500,000 views on social media, around 1,200,000 tuned in on electronic media and over 300,000 listeners on radio.

This year for the first time, the new band Bay of Bengal hailing from Chattogram, performed as the show opener of Joy Bangla Concert 2019, entertaining the crowd with their fusion-rock songs. Their performance was followed by Shunno, a staple of the Joy Bangla Concert, lifting up spirits with their ever-popular originals, alongside a heartfelt and upbeat rendition of ‘Joy Bangla Banglar Joy’. The crowd went electric for each of their tracks. The third band to take the stage was Lalon, which always brings the funk to Joy Bangla, as the sun slowly set on the edge of Bangladesh Army Stadium. Arbovirus, one of most popular rock bands among the youth of Bangladeshi rock, did an astonishing version of the patriotic song, O Amar Desher Mati. Cryptic Fate, one of the pioneers of metal music in Bangladesh, surprised the audience by introducing a traditional dhol (double-headed drum) player in their act. Their rendition of Teerhara ei Dheuer Shagor brought in new energy to the concert, as did their surprise single. Cholo Bangladesh, as expected, riled up the crowd in patriotic spirits. Nemesis started their act with a brand new rendition of their song, Joyoddhoni, blazing through their set with supreme zeal. Bangladesh’s beloved band, Chirkutt brought many surprises, including the presentation of a hybrid santoor, which the guitarist, played with passion. Their enigmatic rendition of the national anthem moved every soul in the stadium. One of the key factors behind the success of the event was the showstoppers – the massively popular rock band Artcell, who came back after nine years with what is closest to their original line-up. Artcell did justice to each and every song, bringing back the old magic, leaving the stadium in a state of awe and ecstasy.

Presentations on CRI-Young Bangla and its work was also shown during breaks with the centre piece being an annimation video on the series of events that followed the historic 7th March speech. This was followed by a coloured version of the inspirational 16-minute clip of the 1971, 7th March speech by the Father of the Nation, that led Bangladesh towards its independence. A teaser on Mujib Graphic Novel series was also showed which was appreciated by the audience to a great extent. Besides, for the first time of Joy Bangla concert’s history, a unique event took place. Young Bangla also launched a campaign on Women Safety at Public Places at the concert to ensure the maximum reach and begin its journey to run a nationwide campaign on Pohela Baishak which will continue throughout the year.