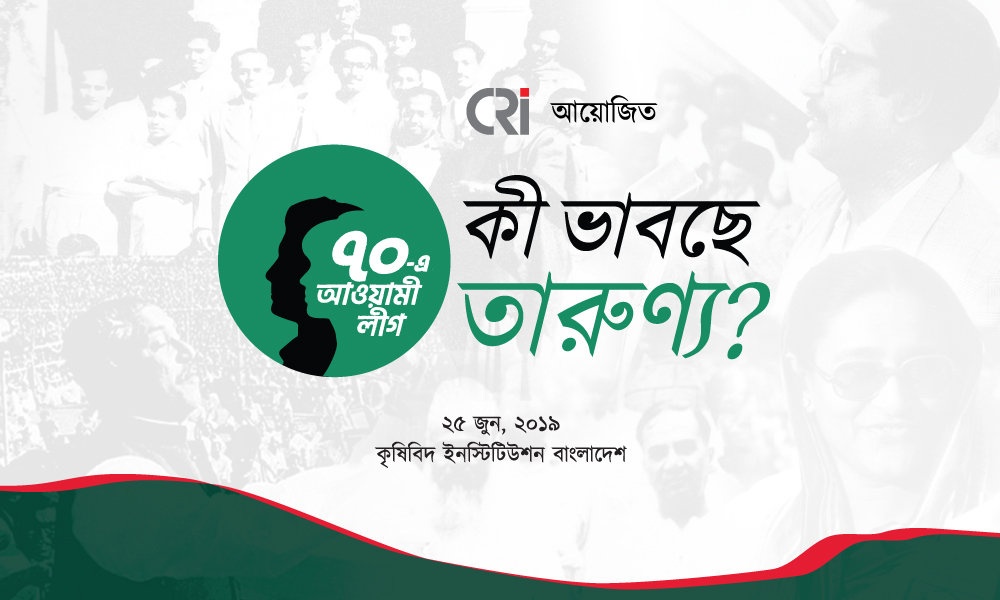 Centre for Research and Information (CRI) organised the programme ‘Awami League at 70: Thoughts of Youth’ on June 25, 2019 at the Krishibud Institution, Dhaka as a part of the occasion of Awami League – Bangladesh’s oldest political group’s 70th founding anniversary. The event was attended by over 250 youth representatives from all sections of the Bangladeshi society, including students, professionals, entrepreneurs, social activists, journalists to express their opinions, expectations and ask questions to prominent leaders of the political party.

The event was divided into three segments i.e history of youth in Awami League, present Awami League and future of Awami League. The panel discussants consisted of Education Minister and Joint General Secretary of Bangladesh Awami League Dr. Dipu Moni MP, ICT State Minister Zunaid Ahmed Palak MP and Vice President of Mohila Awami League (women wing of Awami League) Waseqa Ayesha Khan MP. The 250 participating youth had the opportunity to interact with the prominent politicians of Bangladesh Awami League and express their stance, thoughts and ideas about the history, present and future and vision of Awami League. Their questions and queries ranged from topics such as the succeses and short comings of the ruling party, AL’s stance as an opposition party, their plans to further the progress and development in future, their vision for the country and its level of receptive is it to the needs of the youth.

Bangladesh has the glorious history of student politics. How they evaluate the contribution of student political wings in last 20 years in Bangladesh’s development and progress? How inclusive the past two and present parliament in terms of disability, youth and women inclusion? Is Awami League following third amendment to the Representation of the People Order (RPO) 1972 which requires political parties to set the goal of reserving at least 33 percent of all committee positions for women including the central committee, progressively achieving this goal by the year 2020? – were some of the questions asked by the participants.

Some insightful questions also raised by the participants reflected the concern of sluggish increase in budget allocation for research and the ever increasing in the numbers of students pursuing higher education abroad? What policy measures or initiatives are being taken to stop brain-drain?

The event evolved with some heated discussion when a question rose to explain the current employment scenario with a term ‘jobless growth’.

The panel discussants said the party is eyeing to utilizing the potential of the youth by engaging them in informed political practice to ensure continuous progress. The discussants also tried to grab attention of the participants at the array of initiatives taken Awami League. They also shared their strategies and plans to curbing unemployment, their visions towards ensuring decent employment for the skilled youth and mentioned that BDT 1 billion budgets has been proposed in this year’s budget for creating more entrepreneurs.

A recorded version of the program is set to be televised on Shomoy television on 29th June at 11: 30 am.