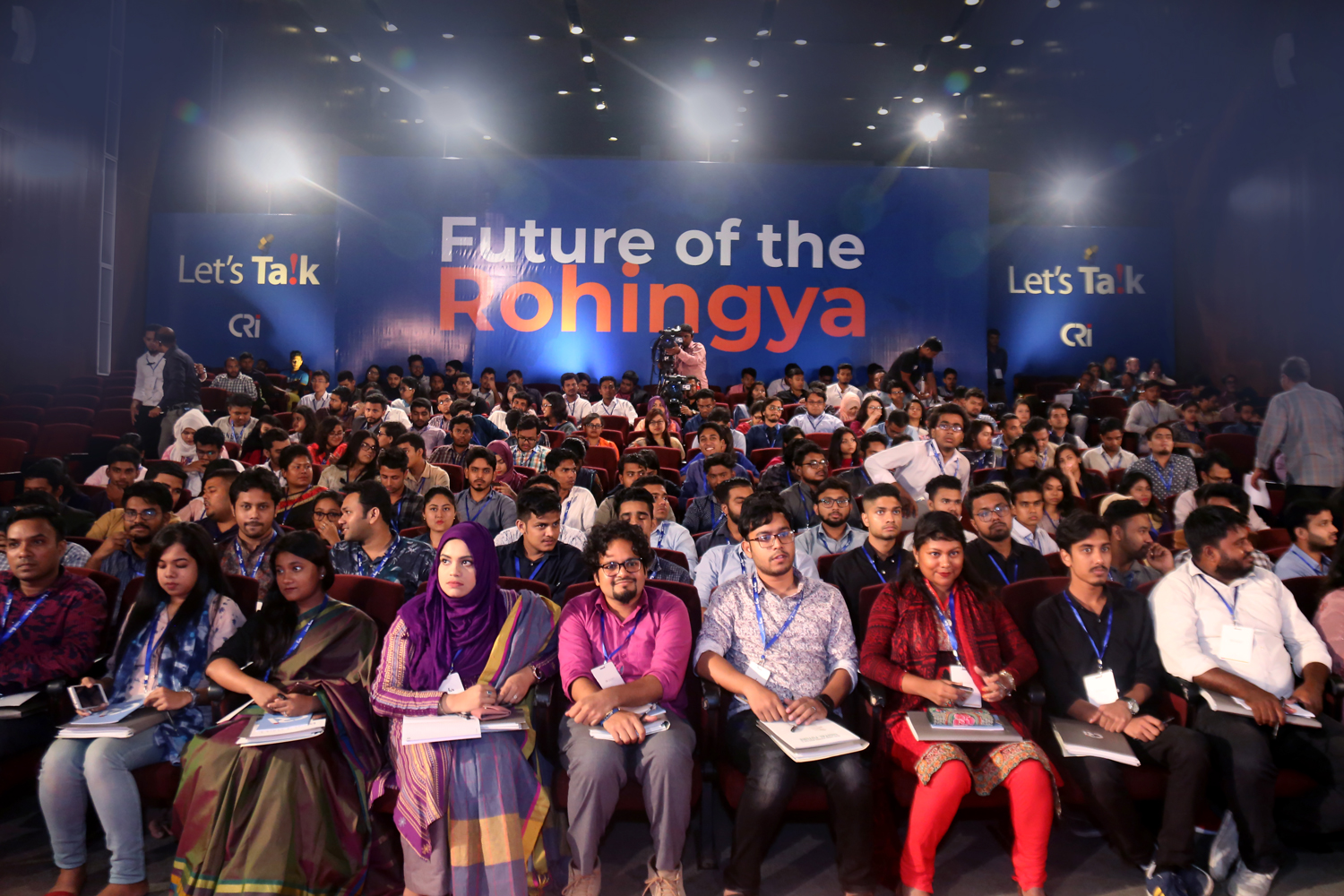 Center for Research and Information organized the 21st episode of its signature programme ‘Let’s Talk’, this time on the theme – ‘Future of the Rohingya’ to mark the two years of sheltering over 1.1 million displaced Rohingya in Bangladesh. The event was held on 9th September 2019, at Krishibid Institute Bangladesh, Dhaka. This event was attended by more than 250 young individuals from across Bangladesh, including students, professionals, service holders and representatives of various youth groups and associations.

This programme provided participating youth a platform to ask questions as well as share opinions and concerns regarding the ground realities in the shelter camps and possibility of a lasting solution. It was a timely initiative when social and formal media were running stories indicating that Rohingya are not willing to go back, causing uncertainty among the public. To answer their questions, Mr Md Shahriar Alam, Honarable State Minister, Ministry of Foreign Affairs of Bangladesh and Mr. Steven Corliss, Representative, United Nations High Commissioner for Refugees (UNHCR) in Bangladesh were invited as the panelists of the event. The Let’s Talk was interactive in nature where participants not just asked questions but also shared valuable insights and suggestions regarding the Rohingya situation.

The event was divided into two segments. In the first segment, the discussants and participants mainly focused on the current scenario in terms of humanitarian operation, funding, impact on host community and environment and two attempts at repatriation. In the second segment, the focus was on exploring the possibilities of a lasting solution of the crisis.

Prior to the main event on 9th September a youth delegation consisting of 10 youths had the opportunity to attend a UNHCR facilitated visit to the Rohingya camps in Cox’s Bazar. A short documentary was shot during the visit and it was shown during the Let’s Talk. Two member of this delegation shared their firsthand experience of interacting with the displaced Rohingya living in the camps.

The participating youth were vocal in expressing concerns over certain issues emanating from the lengthy presence of the Rohingya. Some of them referred to the mass assembly of the Rohingya marking their two years of stay in Bangladesh. Others mentioned issues such as use of mobile phones by the Rohingya, ongoing deforestation, rise of crime incidence, radicalization, drug dealing, financial burden on the country, etc. The two panelists were prompt in answering questions directed to them.
Md Shahriar Alam, Honarable State Minister, during several remarks and interactions, shed light on the approach HPM Sheikh Hasina’s government has been following to deal with the situation. He mentioned that whatever Bangladesh has done for the Rohingyas is unparalleled in human history and the country has received appreciation from global agencies and many countries. The government is working sincerely to start repatriation back to Myanmar. It is also, working through diplomatic channels and will present the case in the upcoming United Nations General Assembly.

Mr. Steven Corliss, Representative, UNHCR in Bangladesh, shared his experience of working on the ground. He was very keen to share some of the views and aspirations of the Rohingya and expressed hope that voluntary, safe, and dignified repatriation is possible in near future. Mr. Corliss further mentioned that UNHCR is working hard on both side of the border to make ways for a sustainable repatriation, and particularly in Myanmar to support the Government there to create the conditions for return. He told the audience that a percentage of the fund in Bangladesh is being allocated for the welfare of host community.

Towards the end of the event, the participants were asked to share solutions for the Rohingya situation. There were some interesting ideas, including a proposal to form a Global Youth Model United Nations with youths from all over the world and take resolutions on Rohingyas repatriation. The two-hour long interactive program ended with concluding remarks from the two panelists. They appreciated the suggestions offered by the participants. The event was moderated by media personality Nobonita Chowdhury.
The Let’s Talk on ‘Future of the Rohingyas’ was broadcast at 7:30 pm on 13th September, Friday by Maasranga Television. To watch the full programme go to http://bit.ly/2maYS1c