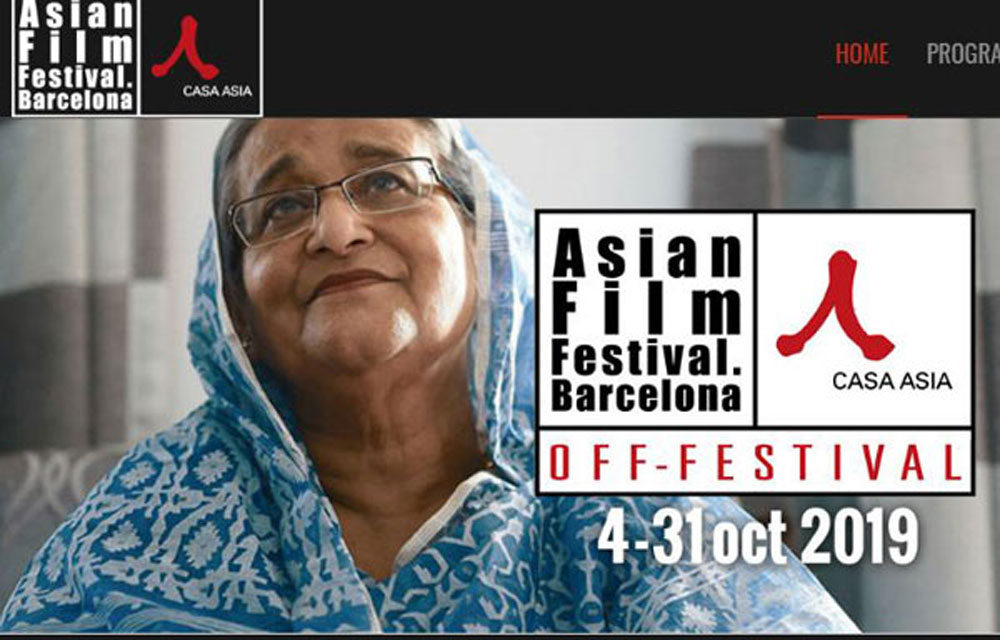 “Hasina: A Daughter’s Tale” was screened at the Asian Film Festival, hosted by hosted by the Asia-based organization Casa Asia in Spain. The docu-drama was screened in the hall of the ‘The Travel Brand Experience’ in Madrid on Monday 14th October 2019. In addition to the large number of festival visitors, officials from various domestic diplomatic missions and leaders of the Spanish Awami League were present at the event.

A significant number of Spaniards were present to watch the documentary ‘Hasina: A Daughter’s Tale’. For the benefit of the local audience the documentary featured both English and Spanish subtitles.

Eva Frutos, a Spanish female viewer, said ‘I really enjoyed the film. I learned a lot about the history of Bangladesh. But more importantly, this film inspires me as a woman to keep moving ahead.’’

The second exhibition, ‘Hasina: A Daughter’s Tale’ was held in the halls of Barcelona’s ‘Be The Travel Brand Experience’ at 8pm on October 5th. The third exhibition will be held on November 3rd, 2019.

The seventh edition of the festival specialized in Asian cinema and bringing together the best filmography in the Asian continent and facilitates the meeting between professionals of the sector and the film industry. As a novelty this year, the organization also arranged an OFF-festival where visitors were able to watch some of the films that are being screened during the festival. This year, more than 100 films from 20 Asian countries will be screened at this year’s Film Festival in Casa Asia, an organization working on countries in the Asia region of Spain. Documentary films from different countries will be screened between October 1st to November 8th, 2019 during the main film festival and OFF-Festival for 12 days.

The film ‘Hasina A Daughter’s Tale’ revolves around the Prime Minister Sheikh Hasina and her sister Sheikh Rehana as they recall memories from their early life back in Tungipara and progresses on to accounts from their life in exile in Europe and India during the aftermath of the assassination of her family. Bangabandhu’s grandson and Centre for Research and Information (CRI) Trustees Radwan Mujib Siddiq and State Minister for Power, Energy and Mineral Resources Nasrul Hamid produced the docu-drama. A team of international personalities have also collaborated including cinematography by Sadik Ahmed and editing by Navnita Sen. The film’s soundtrack and background music was by Debojyoti Mishra, an internationally acclaimed Indian music composer.

8th episode of graphic novel series ‘Mujib’ to be launched on 7th February, 2021