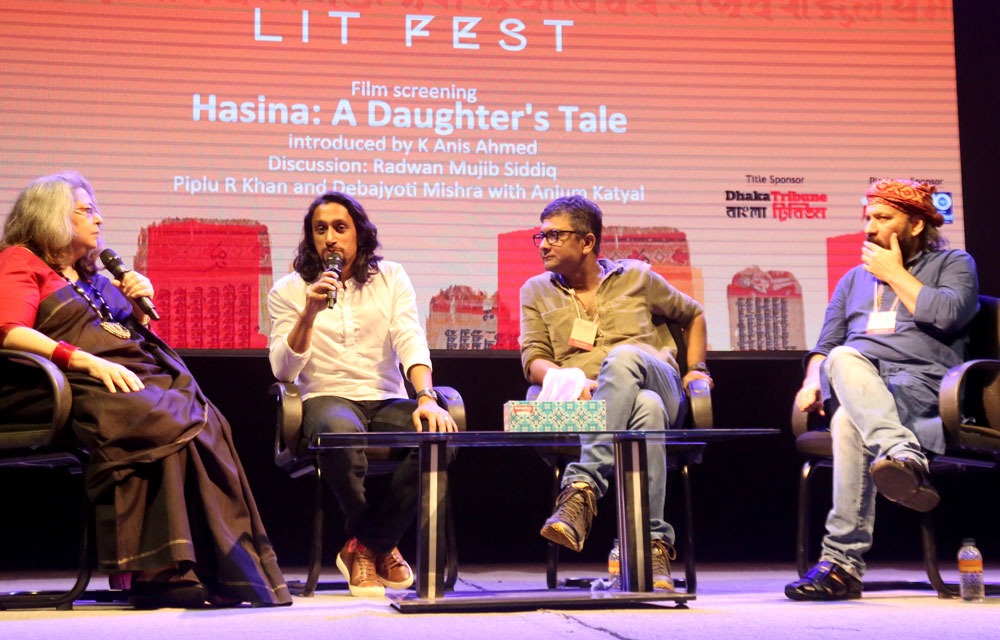 A special screening of ‘Hasina: A Daughter’s Tale’ was held at the Dhaka Lit Fest (DLF) on Friday, November 8, 2019, at the Abdul Karirm Shahitto Bisharod Auditorium in Bangla Academy. Besides festival visitors, the screening was also attended by Member of the Indian Parliament Shashi Tharoor, State Minister for Foreign Affairs, Shahriar Alam MP and State Minister for Power, Energy and Mineral Resources and CRI Trustee, Nasrul Hamid MP.

The screening was followed by a special discussion session with panel speakers – CRI Trustee and the Producer of the docudrama, Radwan Mujib Siddiq, Director Piplu R. Khan, and Music Director Debajyoti Mishra. The session was moderated by Anjum Katyal, Chief Editor of Seagull Books, Kolkata, India.

The panelists shared their experiences during the planning and filming of the ‘Hasina: A Daughter’s Tale’ before the diverse audience pool consisting of Bangladeshi and foreign writers, poets and litterateurs. The panel discussion was followed by a question and answer round where the audiences had opportunity to interact with the panel speakers.

The opening remarks
The Director of DLF Kazi Anis Ahmed delivered an opening remark before the screening. He said, since the docudrama approaches a year mark since its release, the DLF organizers felt that a special screening would be nice memento and an opportunity for film lovers to watch the docudrama. He also mentioned how ‘Hasina A Daughter’s Tale’ gives us a rare glimpse of the Prime Minister’s personal and family life while presenting the audience an opportunity to see Bangladesh in the eyes of the premier.

The Making
Radwan Mujib Siddiq, the producer, voiced his perspective on the theme of this docudrama and how he initiated this project. He portrayed the docudrama as the unexplored bits and pieces of the life of his aunt, the Honorable Prime Minister Sheikh Hasina.

She is wonderful as a human being. We see her in television, official events, award ceremonies, speeches. But in this docudrama we wanted to explore the places where the camera doesn’t follow her; her library, reading room, kitchen – Radwan Mujib Siddiq

When No Script is the Script
During the making of the docudrama, the Prime Minister asked for a script, however, she was told that there was no script. The premier herself, her eventful life, her as a veteran, a seasoned politician would be the script. Besides the Prime Minister, her younger sister Sheikh Rehana, is also seen throughout the film. She was narrating her story, her struggles and how the two surviving sisters supported each other leading to their journey in becoming what they wanted to be and bringing their family’s killers to justice.

The Enthusiastic Audience
While answering a question from the audience, Radwan Siddiq told that he did not feel any pressure during the entire journey of making ‘Hasina: A Daughter’s Tale’. He added that he only wanted to portray how the Prime Minister came this far travelling a rocky road.

The Director Piplu Khan on his journey
I know very well that a production of this caliber would be difficult, but I choose to suffer. That is my job. After getting done with the shooting, I thought we had nothing. It was later when, we I watched the three-minute trailer; I finally felt that we were on to something.

The Music Director Debajyoti Mishra also shared his views on the film. He talked about the emphasis on the essence of music and the genre of the film. He added that the synchronization of the music in this docudrama added extra feature and an artistic value to the docudrama.

Centre for Research and Information (CRI) Trustees Radwan Mujib Siddiq and State Minister for Power, Energy and Mineral Resources Nasrul Hamid produced the docudrama. ‘Hasina – A Daughter’s Tale’ was released back in 16th November 2018, running in popular movie halls across Bangladesh during the following weeks. Since then, the docu-film has been making rounds at film festivals all over the world from Spain, South Korea, India, Sri Lanka, South Africa and Australia.