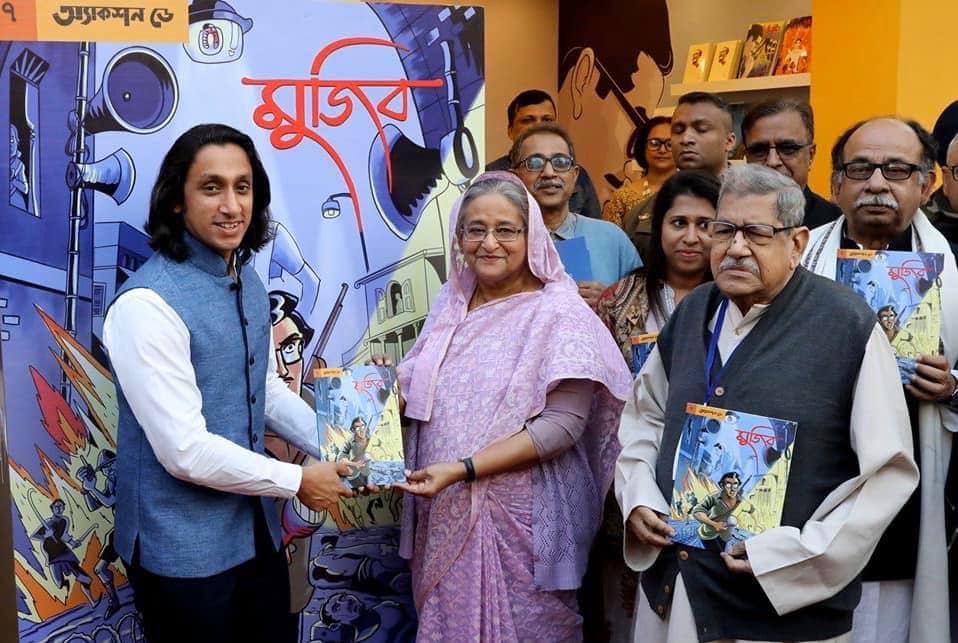 The much awaited part seven of the Mujib ‘graphic novel’ series on the Father of the Nation, Bangabandhu Sheikh Mujibur Rahman was unveiled today, on 2nd February at the Amar Ekushey Book Fair 2020. The Centre for Research and Information (CRI) organized the launching ceremony of graphic novel ‘Mujib-4’ around 12 pm, on the Bangla Academy premises.

The Prime Minister Sheikh Hasina was present for the launching ceremony, organised at the bookstall premises at the Bangla Academy. The Prime Minister along with CRI Trustee Radwan Mujib unwrapped the cover of the 7th episode “Action Day” of the Mujib Graphic Novel in front of the CRI stall. The premier later presented a set of Graphic Novel to her teacher, National Professor Dr. Anisuzzaman. Prior to this event, the Prime Minister inaugurated the month-long Amar Ekushey Book Fair.

The ‘Mujib’ graphic novel stall (no 119) had been set up exclusively for the ‘Mujib’ Graphic Novel series and featured several displays, cut out and decorative walls that contained scenes from different parts of graphic novel series. ‘Mujib’ graphic novel series based on the ‘Unfinished Memoir’ of the Father of the Nation Bangabandhu Sheikh Mujibur Rahman, was initiated to sensitize and educate the young children about the Father of the Nation. The colorful graphic illustration and visualization used in the ‘Mujib’ series were done to make the publication children friendly. Currently available in 6 parts of the 10-part graphic series of CRI is available in Bangla. The first three parts of a translated English version of the series was also available for non-Bangla speaking audiences while the translated Japanese version released in Japan last year was on display.

This episode “Action Day” encapsulates an exciting chapter of Bangabandhu’s life. It includes how he faced the communal rioting between Hindus and Muslims in 1946 Bengal. The episode also covers various elements of his personal life, including the early and beautiful amicable relationship with his wife Sheikh Fazilatunnesa Mujib (Renu).

The 5th edition of Mujib was also unveiled at an official program by the Prime Minister at the Gono Bhaban. This edition of the series illustrates how Bangabandhu, in 1945, was denied his deserved post in Chatra League, the student wing that got no other election until 1947.

The 3rd edition – ‘Mujib-3’ highlights the post-World War II period of the life of Bangabandhu Sheikh Mujibur Rahman, when he emerged as a rising politician and successful organizer despite many obstacles.

Mujib 2, the 2nd edition of the series, covers the political rise of Bangabandhu and his growing ties with his political mentor Shaheed Suhrawardy along with an important football match between the young Mujib and his father.

Mujib – 1, illustrated the childhood of Bangabandhu and how he got involved in politics. It presents the background against which Bangabandhu began writing his autobiography, the stories of his birth, childhood, getting a pair of spectacles when still young and his first jail term.

In addition to the Amar Ekushey Book Fair, graphic novel ‘Mujib’ is available all year round at most popular bookstores including Charcha, Pathak Shomabesh, Kak, Madal in Dhaka and Batighar in Chittagong. The graphic novel on Bangabandhu is also available for delivery across the country and the interested readers can call 01826018665, or order for books at [email protected], [email protected]

Sheikh Hasina Standing Up For The Women of Bangladesh