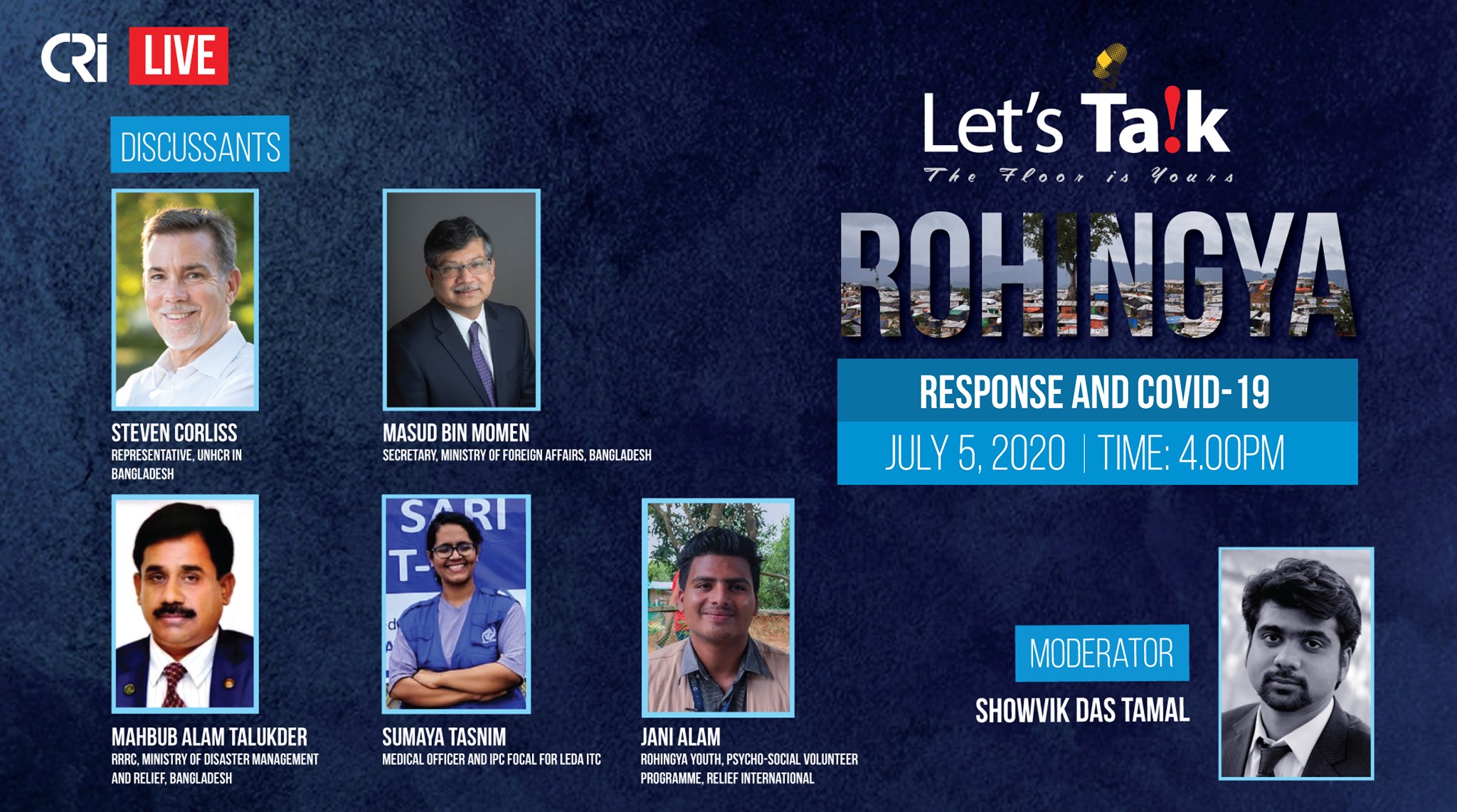 Bangladesh hosts more than 1.1 million Rohingyas who have been displaced from their homeland in Myanmar. They reside in 34 camps located across Teknaf and Ukhia upazilas (sub-districts) in Cox’s Bazar district.
As Bangladesh battles with the COVID-19 pandemic, many fear that the Rohingyas living in congested camps might be infected in large numbers; creating a deeper humanitarian crisis.

On July 5, 2020, Centre for Research and Information (CRI) hosted an online Let’s Talk on “Rohingya Response and Covid-19.” Foreign Secretary Masud Bin Momen, UNHCR Representative in Bangladesh Steven Corliss, Refugee Relief and Repatriation Commissioner (RRRC) Mahbub Alam Talukder, and Medical Officer and IPC focal for Leda ITC Sumaya Tasnim were the speakers. Jani Alam, a Rohingya youth working as a volunteer with Relief International, also joined the discussion. The discussion focused on the government’s early planning and joint efforts with UN agencies and other humanitarian partners to limit the transmission of coronavirus in the Rohingya settlements. 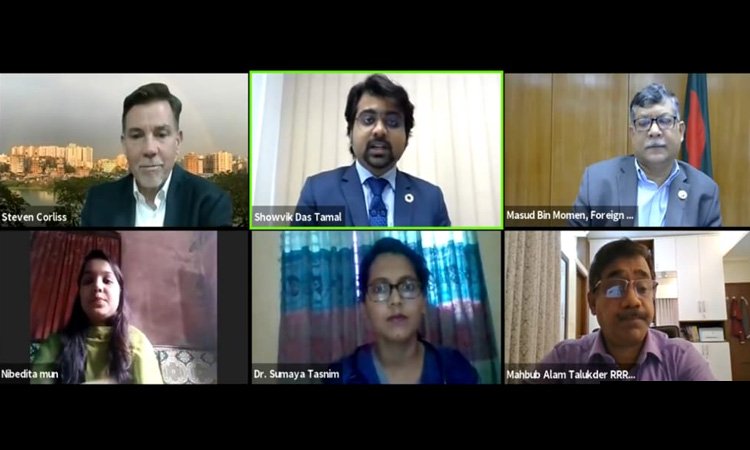 The strategy to contain the COVID-19 outbreak in the Rohingya settlements
At an early stage, the government agencies, led by the RRRC, took decisive actions with the support from the partners to deal with the COVID-19 situation in the camps. The RRRC Mahbub Alam Talukder said, they have taken a coordinated approach with UN organizations and other stakeholders. Restrictions were put to limit people inside and outside of the camps, and thus controlling transmission of the virus. They had limited movement of officials and staff to 20 percent, while limiting transport movement to 10 percent. Only essential services are allowed in the camps.

The government and other stakeholders are working together to keep the Rohingya people and the host community safe and protected. The RRRC prepared health guidelines in Rohingya language and circulated them in the camps through community leaders. Isolation and quarantine centers with adequate numbers of beds have been set up in the camps. Testing and treatment facilities have been increased gradually. The RRRC said, “The situation is not at alarming stage. We are not panicked. We are well prepared now. We can fight Covid-19 well with the support from all.” 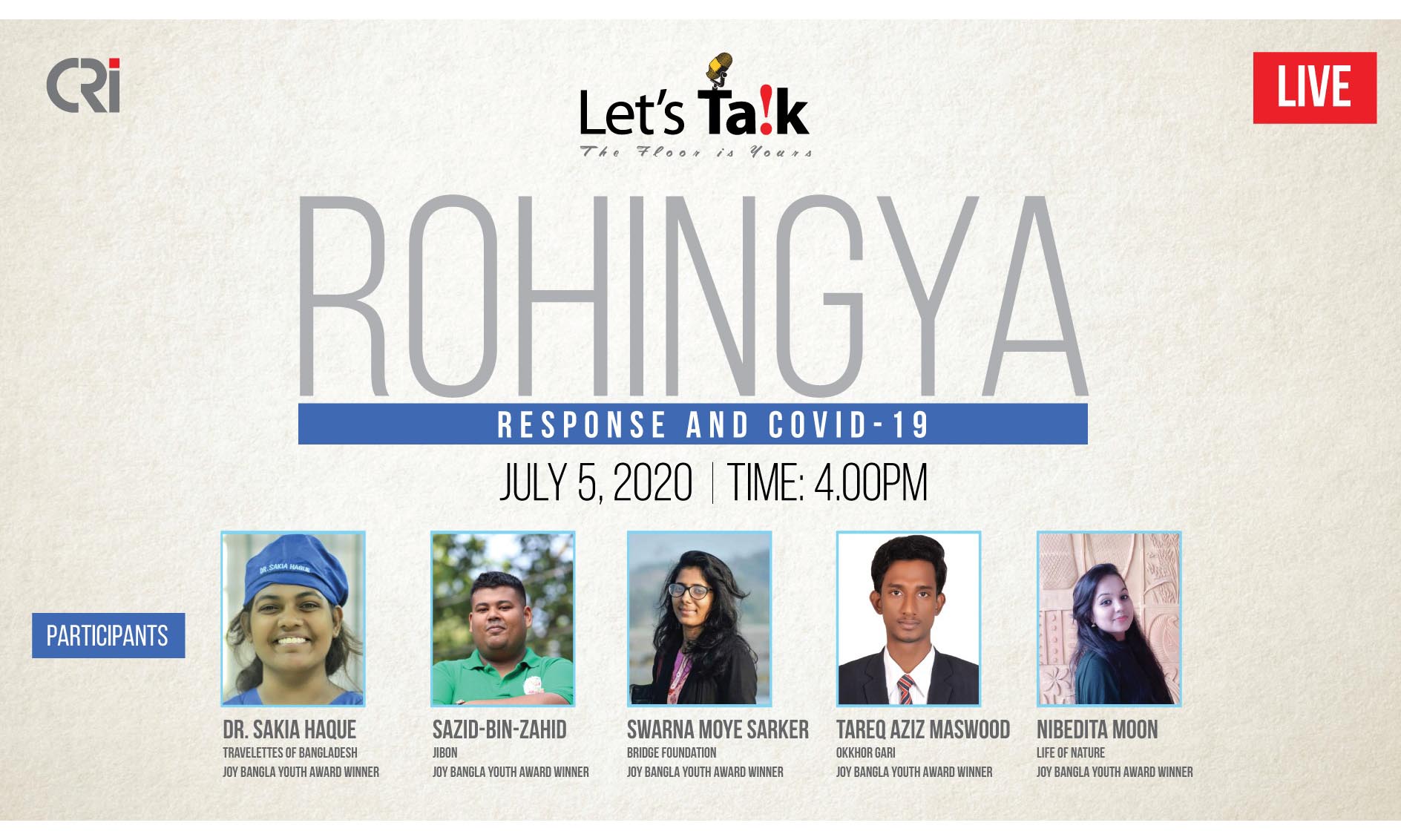 Mentioning the COVID-19 scenario in various parts of the world, Foreign Secretary Masud Bin Momen said, “despite constraints, we have managed Cox’s Bazar quite well. This is a good story and must be shared as much as possible.” He also mentioned that, early planning and preparedness on the part of the government was critical in managing the pandemic in the camps.

UNHCR Representative in Bangladesh Steven Corliss highly appreciated the joint efforts in scaling up the health response and facilities for both the Rohingyas and the host communities. He, however, said they should not be complacent with the progress, noting that they have to improve testing capacity gradually ensuring facilities for the Rohingyas and the host community.

Rohingya repatriation
Despite huge socio-economic strain, Bangladesh has been hosting over 1.1 million Rohingyas, many of them entered Bangladesh since August 25, 2017 amid military crackdowns in Rakhine State, Myanmar. Almost three years have passed and not a single Rohingya has returned home although Myanmar agreed to take them back. Bangladesh wants other countries and particularly the UN to intervene and find a way for safe and dignified repatriation.

Responding to a question, the Foreign Secretary said, the government’s key target is to repatriate Rohingyas to their place of origin in Rakhine safely. He mentioned the repatriation efforts have slowed down to some extent due to coronavirus situation; and they are trying to expedite it.

The government took up the Bhasan Char (an islet in Hatiya upazila) project to minimize multiple risks for the Rohingyas including landslides, trafficking and radicalization. It was a sovereign decision of the government to decongest the Rohingya camps in Cox’ Bazar until a repatriation process begins. “All facilities including livelihood for 100,000 people are there. Even recent cyclone Amphan could not leave any impact on Bhasan Char,” said Foreign Secretary Masud Bin Momen.

Future funding for Rohingya response
It is likely that there might be a shortage of humanitarian aid funding for the Rohingyas in the future due to the pandemic-related economic recession. Funding would be more challenging in the coming days as the donor countries would focus on rebuilding their own economy. But COVID-19 has surely increased humanitarian needs for both the Rohingyas and the host communities. In this regard, UNHCR Representative Corliss said, they are making the best use of funds reducing operation costs and expenditures in ways that do not impact the programs and the lives of the Rohingyas and local people. He added, “We, all of us – the UN organizations, the government, NGOs and INGOs and other partners- have to communicate the tremendous work we are doing to shelter and protect the lives of the Rohingyas.”

The Let’s Talk was live streamed in CRI and Young Bangla Facebook page and YouTube channel. Some of the leading news media also live streamed the event from their social media platforms.