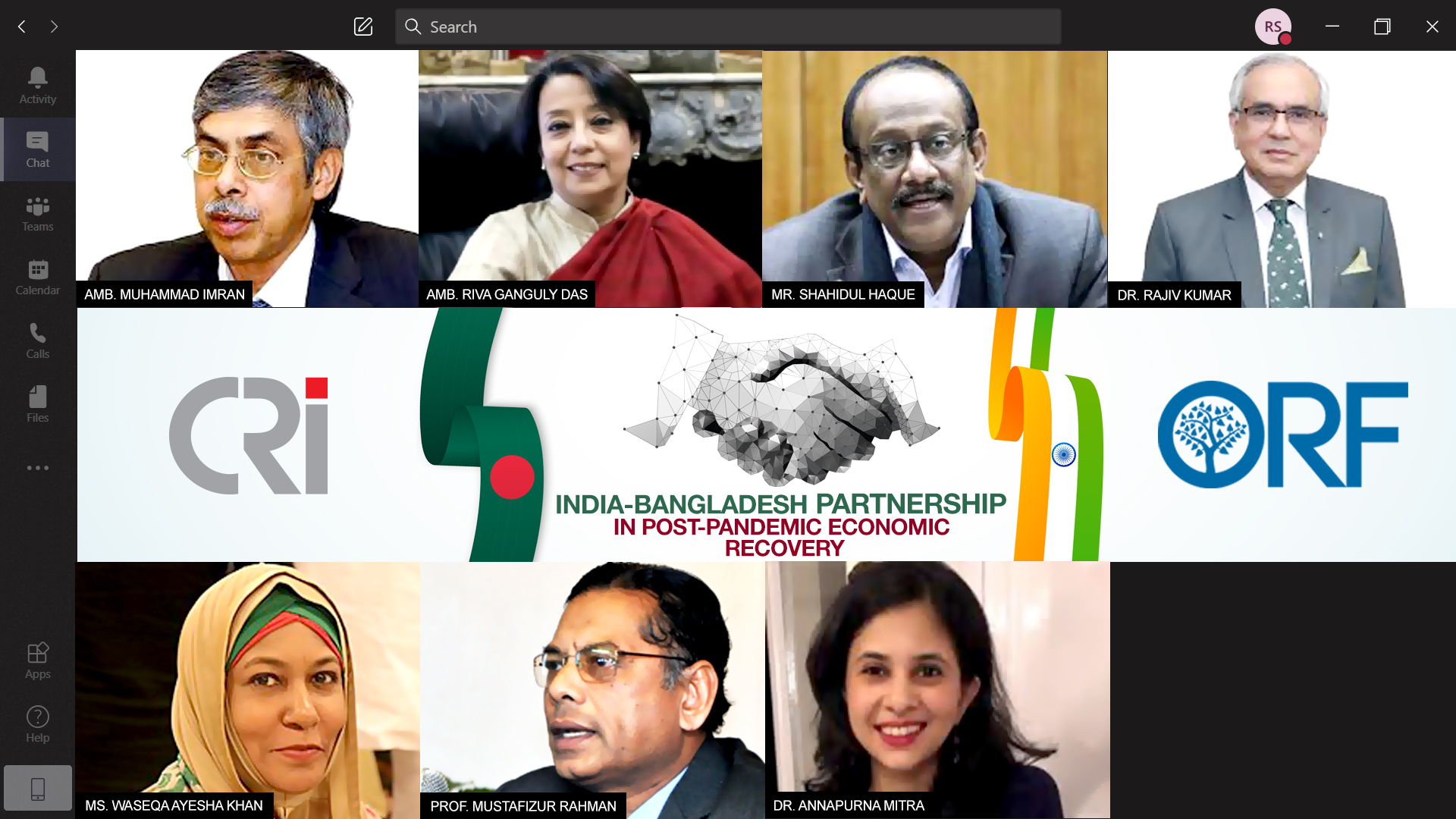 The Covid-19 pandemic, which emerged as a multilayered global health crisis, has had a ripple effect of enormous proportions on the lives and livelihoods of people worldwide. Amongst those most significantly affected are developing economies, such as India and Bangladesh. The leadership and people in both the neighbouring countries have always considered each other as a friend and supported their progress in all fields. The rapport between the highest leadership of the two countries has resulted in the relationship charting a new direction, which could be extremely beneficial in the post-pandemic scenario.

In this spirit, the Observer Research Foundation (ORF), India and the Centre for Research and Information (CRI), Bangladesh had co-hosted a digital roundtable discussion titled, “India-Bangladesh Partnership in Post-Pandemic Economic Recovery” on July 25, 2020. The virtual roundtable brought in key stakeholders and interlocutors from India and Bangladesh to examine the impact of the Covid-19 pandemic on the countries’ economies, the subsequent economic responses, and the role of international partnerships in jointly combating issues in the post-pandemic world.

The discussion focused on new initiatives in foreign policy, employment generation, economic stimuli, private-sector partnership, and collaboration with development partners. The event included a few interventions (see Annexure I) to trigger the conversation, following which the Chair, Mr. Shahidul Haque, had opened the floor for a free-flowing discussion among the distinguished representatives at the virtual roundtable. Various quarters from both the countries attended the roundtable; it included foreign policy analysts, economists and representatives from the development sector, private sector and trade bodies.

The Chair opened the discussion by mentioning that Bangabandhu Sheikh Mujibur Rahman laid the foundation for a strong India-Bangladesh relationship. He highlighted a quote by Sheikh Mujibur Rahman when he was in Kolkata, during one of this first state visits as the leader of newly independent Bangladesh: “We have a very special relation with India. The relationship is the friendliest. The bonds of friendship will remain firm and long-standing.”

Strengthening Bilateral Ties
Apart from being India’s biggest development partner, Bangladesh is also India’s largest trade ally in South Asia. Bilateral trade between India and Bangladesh has grown steadily over the last decade. Settlement of India-Bangladesh maritime boundary dispute in 2014, ratification of Land Boundary Agreement, and the successful exchange of enclaves in 2015 have been major enablers in strengthening the relations between the two countries.

With the recent flagging off of the first consignment from the Kolkata Port headed towards Agartala and Assam via the Chittagong Sea Port, Bangladesh has also signalled a new beginning of trade connectivity between the Bay of Bengal region and Northeast India.

With India transferring 10 railway locomotives to Bangladesh, it is clear that there are continued efforts to further boost bilateral economic engagements between the two nations. Both sides are also cooperating in diverse areas including space, IT, civil nuclear cooperation, shipping and electronics, energy sector, tourism etc. and 90 MOUs have been signed to this effect.

The economic and socio-political ramifications of the Covid-19 pandemic will be manifold and long term. As regional leaders, India and Bangladesh can jointly take the next steps to address these challenges. Sharing experiences, insights and strategies will help cement the existing partnership between the two nations, and help lay out a blueprint for a ‘new normal’ with higher levels of preparedness, revamped economies and revitalized international partnerships. This could also present key lessons for both the countries, and other developing nations.

The Way Forward
The pandemic has wreaked havoc on the global supply chains making the situation worse for developing economies such as India and Bangladesh. Since a large portion of the countries’ value chains are associated with the informal sector, there needs to be deeper partnerships for systematically organising the domestic economic operations in the post-pandemic economy.

In the same vein, there is no doubt that the Bay of Bengal region holds much economic potential that both countries should specifically leverage through strategic bilateral partnerships, as well as through multilateral platforms such as the BBIN (Bangladesh, Bhutan, India, Nepal) initiative and the BIMSTEC (Bay of Bengal Initiative for Multi-Sectoral Technical and Economic Cooperation) forum.

Similarly, Science & Technology is a prominent domain that both the countries need to focus on for the post-pandemic economic revival process. Bilateral partnerships in this area could include joint degrees in technology from universities in India and Bangladesh, understanding digital platforms better for collaborative technical solutions, creating technology bridges and digital clusters among the major start-ups in both the economies.

Further, strengthening the dialogue between the private sectors and the trade bodies between both the countries is of utmost importance. Providing access to each other’s market and constant dialogue between both the countries would resolve many of the tabled issues. Northeast India’s development can be accelerated with further trade and transit connectivity from Bangladesh. Similarly, opportunities for Indian investors in Bangladesh have always been immense.

Conclusion
In terms of discussing the partnership opportunities for India and Bangladesh, it is important to leverage on the potential of human capital, which is driven by the youth in both countries. The working-age population(the ages between 15-64 years) of Bangladesh and India is as high as 66.7 percent and 66.98 percent respectively – it is clear that, the young population in both the countries could play a crucial role in boosting the digital economies by pooling the knowledge together in the post-pandemic situation.

Additionally, health and human mobility related aspects come to the fore during the pandemic. In such a scenario, both the countries must collaborate to protect its large vulnerable population due to the interlinked issues of climate change, floods, cyclones, etc., especially in the Sundarbans. Both countries need to ensure that the sustainable development processes and economic recovery in the near future is socially inclusive.

A few pointed proposals that emerged from the discussion, for directing post-pandemic partnerships between India and Bangladesh included:
● There is potential for both Bangladesh and India to climb up the global and regional value chains, by further integrating the economies, and collaborative processes among businesses.
● There is a massive opportunity to enhance digital connectivity and technical capacity building. University-level and research collaborations, such as South Asian University reformation, would benefit both the countries.
● Water management, in context of climate change, would be crucial in post-pandemic times. Joint projects related to Sundarbans and other similar ongoing initiatives should be reprioritized.

This year of Mujib Borsho (the centennial birth anniversary of Bangabandhu Sheikh Mujibur Rahman) provides an opportunity to further strengthen ties. It allows us to pay homage to both Indians and Bangladeshis who died for a common cause in 1971. Bangabandhu’s legacy has made our joint heritage steeped in history, economics and culture. In conclusion, it must be noted that the India Bangladesh relations must go beyond strategic partnerships to create a regional response hinging on economic stability and national security in the post-pandemic world.