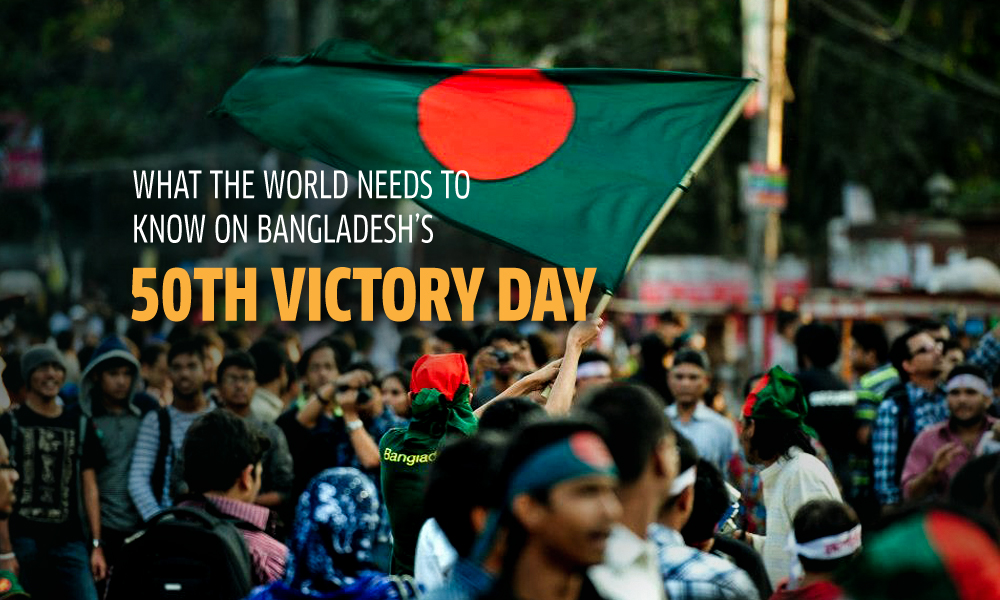 Today Bangladesh is celebrating its 50th Victory Day with special caution due to the COVID-19 pandemic. The country is at the doorstep of its golden jubilee year of independence. In fifty years, Bangladesh has stacked up many success stories for the developing world to note. Today’s Bangladesh is not a fragile economy; it’s self-dependent. The journey was not smooth.

Born out of fire and blood in 1971, Bangladesh started off rebuilding under the stewardship of its founding father Bangabandhu Sheikh Mujibur Rahman. Bangladesh overcame many sociopolitical and natural hurdles. The country was derailed from its development track. The major derailment happened when military dictators grabbed state power and ruled for around 15 years, starting from 1975. In PM Sheikh Hasina three successive terms since 2009, the country, jumpstarted its growth momentum. The growth has been inclusive with major socio-economic and human indices accompanying the growth. Bangladesh now is considered a role-model for other developing countries.

Today Bangladeshis remember that the sacrifices of the founding father, and the millions of martyrs in the war of liberation, were for a progressive and inclusive society. The politics of development has proven to be the propelling factor for Bangladesh to become a shining star from South Asia. Here are some real success stories that Bangladesh can showcase to the world:
• Bangladesh is not hunger-ridden. Today, Bangladesh has transformed into a food basket – and a model for food security for the rest of the world. Farmers are the heroes behind this success. Growth of agriculture and national food security has been one of the top policy priorities for PM Sheikh Hasina. Once a major importer, Bangladesh now exports surplus food grains, processed food items and fish to many countries.
• Under the decade-long leadership of PM Sheikh Hasina, development meant more than the size of the economy. Inclusive growth policies, firm fiscal management, domestic and overseas employment generation, and broad-arching social security program, have resulted in reduction in both moderate and extreme poverty. The poverty rate in Bangladesh in the 2019 was 20%, which fell from 31% in 2009. Extreme poverty is also nearing single digit, to 10%.
• Human development indicators, like education and public health, have set another model area. The country’s success in setting up an extensive health service network, in forms of rural community clinics, has been exemplary. An extensive vaccination program has also earned loud appreciation from international communities. The achievements in girl’s education, ¬financial inclusion, social security and political participation were the noteworthy among South Asian countries.
• Bangladesh has closed 73% of its overall gender gap, according to the Global Gender Gap Index 2020. Women’s participation in politics and labor force is one of the main drivers of Bangladesh’s development story.
• Economic growth hit a record 8.2% in 2018-2019. The record growth is a continuation of the economic success. The growth momentum has made Bangladesh one of the five fastest-growing economies in the world. This rapid growth has enabled it to graduate out of World Bank’s lower income country status in 2015. In 2024, Bangladesh will graduate out of UN’s Least Developed Countries (LDC) list.
• Beginning of 21st Century, like most developing countries, poor infrastructure became the major hurdle to economic growth in Bangladesh. In last decade infrastructure bottleneck has been cleared out. At the end of 2020, the country achieved another milestone: the near complementation of the 6.2 km Padma bridge, one record setting megaproject out of South Asia. As an example, for other donor dependent nation, this $4 billion project was financed from domestic resources.
• The power sector of Bangladesh is one of the fastest growing in South Asia. After 2009, tightly-knit strategies for the power sector – at generation, transmission and distribution stages – were implemented with a vision to ensure full electrification and scale up generation. By the end of 2020, Bangladesh is set to reach 100% electrification – another milestone for a developing country.
• The RMG industry of Bangladesh has made it an export powerhouse. Bangladesh is estimated to be the second largest garment exporter in the world. The export earnings have shown promising growth trend in the recent years.
• There are nearly a million small and medium enterprises (SME) in Bangladesh. The contribution of these SMEs to GDP is an estimated 23%. Contribution of Bangladesh’s SME sector is a major point to note for development strategists around the world.
• In 2009, a “Digital Bangladesh” initiative was introduced by the new Awami League government. The journey started with almost a negligible amount of digital connectivity in the country. The aim was to digitally connect all of Bangladesh in a decade. Driven by widespread digitization in the public and private sector, the country has seen exponential growth in its internet connectivity, cell phone usage, IT export earning and accessibility of public services. There are over 100 million internet subscribers in the country.
• Bangladesh has also entered space age. It is among few hand counted developed countries in that league. A geostationary satellite, Bangabandhu-1, was launched in 2018.

Encapsulating the journey of Bangladesh, PM Sheikh Hasina addressed the nation on the occasion of 50th Victory Day. She mentioned that Bangladesh’s resilience is rooted in its pluralism. The country achieved its independence in an exchange of blood of Muslims, Hindus, Buddhists and Christians. She boldly reminded everyone, “the people of the country will move on towards prosperity, progress and development keeping the religious morale high.” In her 18-minute speech, the PM urged all to take a vow on the eve of the Victory Day not to forget the spirit of the bloody liberation war. Her appeal was especially directed to the youths, to whom she urged to take a vow to transform the country into prosperous country.