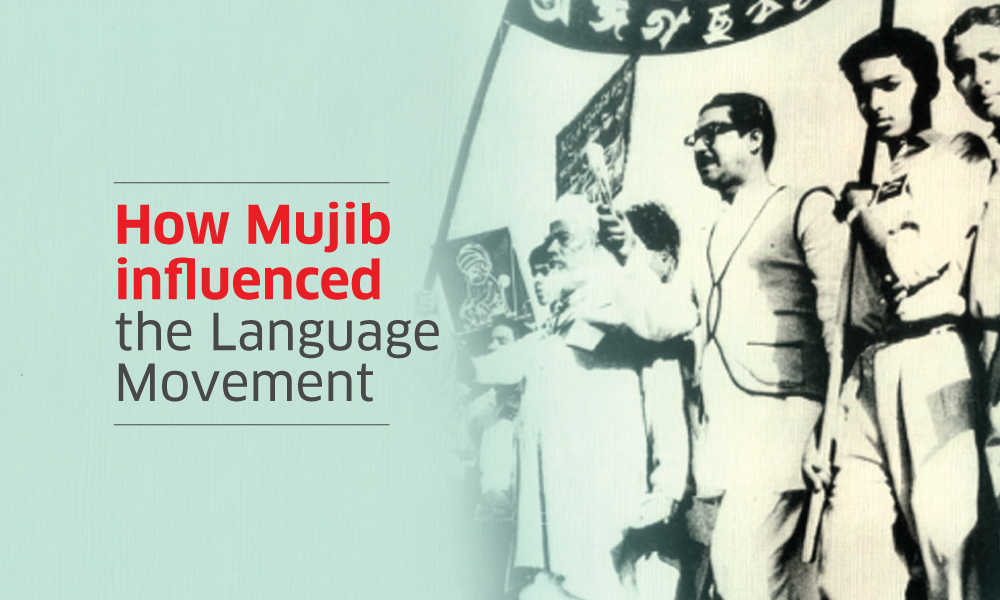 Sheikh Mujibur Rahman, fondly known as Mujib, was the founding father of Bangladesh. He began to distinguish himself as a politician from the early 1950s. He was an ardent proponent of the culture and identity of the Bengalis of erstwhile Pakistan. Through his active involvement in the Bengali Language Movement, Mujib provided leadership in bringing the Bengali identity into prominence.

Soon after the partition of the Indian subcontinent in 1947, the top leaders and the elites of the West wing of the then Pakistan launched a systemic cultural and linguistic discrimination towards the Bengalis of East Pakistan. The first attack was on the language, Bangla. The rulers tried to establish that Urdu, a language spoken only by the political elites and some people of West Pakistan, would become the sole state language of Pakistan. The Bengalis resisted immediately. They demanded that Bangla must be given the status of a state language of Pakistan. Mujib was involved in student politics at that time. Mujib, being proud of his Bengali identity, was proactive during the strikes and protests against the language policy of Pakistan government.

Youth activist Mujib, was one of the few student leaders who played a critical role in shaping the language movement into a mass movement. In 1948, as a member of progressive student fronts, he was pivotal in organizing mass gatherings, rallies and strikes for building awareness against the discriminatory language policy of Pakistan.

Mujib started attending the meetings of activists of different socio-cultural and political organizations. They decided to wage a broad movement against the language policy and in view of this an ‘All Party Action Committee’ was formed. A strike was called on 11 March, 1948 to press the demand of recognizing Bangla as one of the state languages of Pakistan.

During the early days of March 1948, Mujib organized students, in East Pakistan’s southern districts of Faridpur, Jashore, Doulatpur, Khulna, and Barishal, to build public-support for the movement. During the strike, Mujib led the protesters in Dhaka city. Shortly thereafter, the police assaulted and then arrested him and his associates.

“The city Superintendent of Police (SP) tried to chase me in his jeep, but failed to catch hold of me. I realised that I was going to be cornered. I gave my cycle to a friend and then decided I would sit down in front of the Eden Building gate with four or five other students. I told the friend to whom I had given my cycle that he should send us some more students as soon as possible to help us in our resistance. … Some students saw what we were doing and decided to join us in the sit-down strike. Some of us got beaten up and some were arrested and hauled into jeeps. Seventy to seventy-five of us were tied up and sent to jail in the evening. The movement, however, had picked up momentum by then. We had managed to get the support of the people of Dhaka in the end.”

The Government of Pakistan was later compelled to release Mujib and all of his associates. Once out of jail, Mujib and his youth organization went to campaign around the country to garner support for the language movement. The whole province began vibrating with rallies, processions and relentless slogans.

February 1952: Climactic phase of the movement

The language movement sparked when Khwaja Nazimuddin, the then Prime Minister of Pakistan, restated that “only Urdu shall become the state language of Pakistan” on 27 January, 1952. Mujib was behind bars. It was around a period when Mujib was getting repeatedly arrested. On February 14, 1952, just a week before the movement was reaching its peak, Mujib got arrested.

During February 1952, imprisoned Mujib was admitted at the Dhaka Medical College. While in captivity, Mujib stayed in constant touch with those waging the movement to realize Bangla as the state language. From the confines of his prison, he passed on key directives to make the movement a success. In his memoirs Mujib wrote:

“I have come to know that they are going to send me back to jail soon since they believe that I’ve been busy politically in the hospital. Come again to meet me tomorrow night…The next night all these people came to see me one after another. We decided in the meeting in my room to observe 21 February as State Language Day and to form a committee that day to conduct the movement to establish Bengali as the state language.”

During a strike on 21 February, 1952, the protesting students tried to defy a curfew, “Section 144,” imposed by the government. Police opened fire and killed a number of students including Abdus Salam, Rafiq Uddin Ahmed, Abul Barkat and Abdul Jabbar. Saddened by the demise of several protesters in the language movement, Mujib strongly condemned the action of the police in an open statement. On the face of a hunger strike, he was released on 27 February, 1952.

1956: Bangla recognized as one of the state languages of Pakistan

In 1953, as a fore-front leader, Mujib played a vital role in organizing the first anniversary of the 1952 21st February. On 21 February, 1953, he led the procession commemorating the language martyrs. He and his fellow commemorators raised a demand for declaring 21st February (which became popularly known as ‘Ekushey’ in Bangla) as ‘Shahid Dibosh’ (martyr’s day). The demand also includes to declare Bangla as one of the state languages of Pakistan with immediate effect.

Mujib got elected to the East Bengal Legislative Assembly (provincial assembly) on a ‘United Front’ coalition (consisted of various East Pakistan-based progressive parties) ticket in 1954 and served briefly as the Minister of Agriculture and Forest. Later Mujib was elected to the second Constituent Assembly of Pakistan and served from 1955 to 1958. In 1956, he joined a second coalition government as Minister of Industries, Commerce, Labour, Anti-corruption and Rural Development, but resigned in 1957 to work full-time for organization his political party.

Mujib’s political career was significantly shaped by the spirit of the language movement 0f 1950s. As a politician and statesman, Sheikh Mujibur Rahman worked relentlessly for the development of Bangla language. He as the Prime Minister of Bangladesh initiated a number of bold steps to introduce Bangla in all spheres of national life.