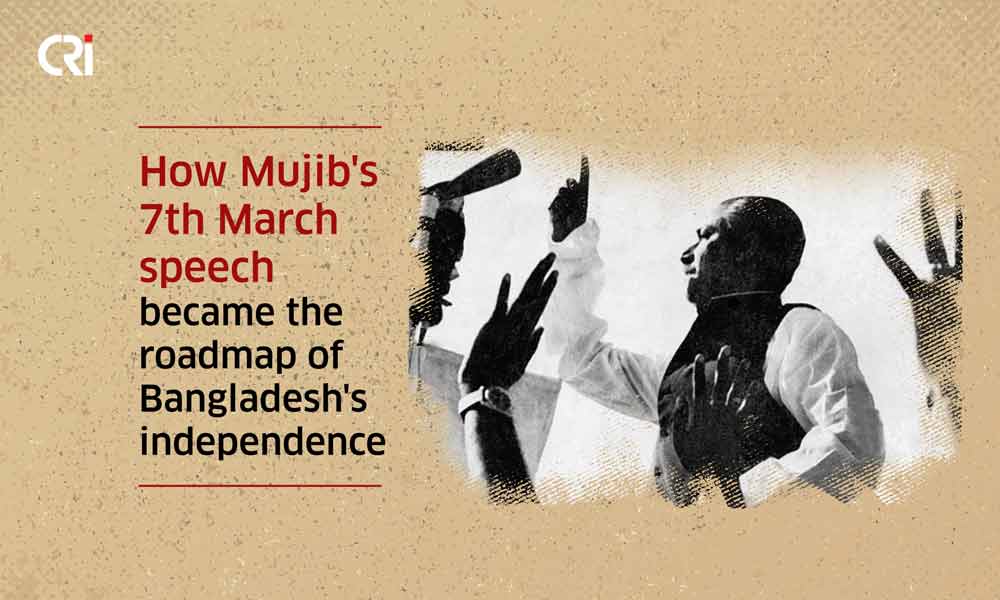 Many students of political history who focus on South Asia may rightly wonder why a speech of a political leader in erstwhile East Pakistan gained documentary heritage recognition from UNESCO, a United Nations agency. Only after listening to Bangabandhu Sheikh Mujibur Rahman’s invigorating speech of 7th March, 1971, the South Asian political history enthusiasts would realize the significance and archival value of the historic speech.

It was the thrust behind Bangladesh’s War of Liberation in 1971. Aforementioned “7th March” did not occur out of the blue. Before diving into Bangladesh’s journey from demanding regional autonomy to intense independence movement during Pakistani rule, a brief reflection on pre-7th March period is needed.

After partition of British India in 1947, today’s Bangladesh was part of Pakistan, which had two wings, the East and West Pakistan. The two wings had over 1000 miles of geographic distance and divergent culture, ethnicity and language. The story of unhappy marriage between the two federating units of Pakistan was the story of regional exploitation and systemic discrimination. It began with the establishment of central government in West Pakistan. East Pakistan’s population was largely Bangalis. They were 55%, the majority of Pakistan’s population. Soon after, a systemic assault on Bangali language and culture led to a resistance movement which came to be known as the “Language movement.” But the Pakistani regime did not learn, and its exploitative methods continued.

The Pakistani regime’s exploitation manifested sharply in form of neglect in development investment in East Pakistan (now Bangladesh). Public finance resources were being systemically mobilized from East Pakistan’s fair share to bolster the West Pakistan’s economy. A transfer of resources worth $2.5 billion took place in a period of 22 years. It was a gigantic sum for a small post-colonial economy. Apart from the economic and socio-cultural exploitation, the Bangalis were marginalized in the governance structure. Almost all policy decisions hailed from West Pakistan.

When the exploitation reached at its peak, Mujib, who was already at center of the resistance’s leadership, had popularized the demand for regional autonomy and was turning resistance into a struggle for independence. He placed a policy prescription known as “Six-point demand” in 1966. The demand gained momentum when a student body named Central Students’ Action Council was formed on January 1969. These students began a countrywide protest to withdraw infamous Agartala Conspiracy Case against Mujib and free him. This protest turned into a Mass Upsurge Movement against the then military junta leader Ayub Khan. The military replaced Ayub with another dictator, Yahya Khan.

After coming to power in March 1969, Yahya promised to hold fresh elections, which was tactically delayed a few times. The elections finally took place on 7th December, 1970. Mujib won a 99% majority seats in East Pakistan. His pollical party, the Awami League, acquired absolute majority in the Parliament.

Even after the landslide victory, West Pakistani political elites, mainly Yahya and Pakistan People’s Party leader Zulfikar Ali Bhutto, decided to delay the Parliament formation. It was simply a strategic move to to buy time and devise a plan for the retention of power.

The West Pakistani bluff became vivid when the military dictator Yahya Khan suddenly postponed the first session of the Parliament on 1st March, 1971. Series of events unfolded in next few days. The public reaction was immediate. Mujib called a press conference to provide direction to the mass resentment against the arbitrary postponement. He urged the people to start a non-violent, non-cooperation movement and announced countrywide strike to be observed. He called for a public meeting on 7th March.

Thousands of people took to the streets holding processions against the regime. Many protestors were gunned down by the Pakistani forces. Mujib strongly condemned the killing of innocent people. Against this backdrop, Mujib appeared in front of the wave of eager crowd on 7th March.

On 7th March, 1971, at afternoon, the crowd was settling at the Dhaka’s iconic Race Course ground. Mujib reached the venue and went straight to the podium. By then, the venue turned into sea of people numbering more than two million. At this point, Mujib was surely the undisputed leader of the Bangalis.

This clearly reflects that Mujib was speaking the mind of suppressed people. He was speaking for the rights of the Bangalis. Mujib spoke for their cultural, social and economic emancipation. Mujib, who spearheaded the movement for regional autonomy, began to speak of independence.

Brothers of mine, the Assembly has summoned on the 25th March. The marks of bloods have not yet dried. I had clearly said on 10th March that Mujib Rahman can’t joint RTC (round table conference), treading the bloods of martyrs.

This was a strong indication that the time for discussion is narrowing and the electorate demands must be met.

…If one more shot is fired and if my people are killed again then my request to you is; build a fortress in each and every home. Face the enemy with whatever you have. In case I can’t give you any further order, I tell you; close all roads and highway indefinitely…

Mujib concluded the speech with a masterstroke in the last two statements.

This concluding stroke ignited the public emotions. It sounds galvanizing in Bangali. It soon became the defining indication of independence of Bangladesh. With this catchphrase, Mujib finally put an end to dillydally of gaining regional autonomy and turned the mass movement into a struggle for the ultimate emancipation.

It was more than a dog-whistle. People of Bangladesh got their call to unshackle themselves from nearly two and half decades of exploitation and suppression. The March 7th speech was an unwritten, extempore lasting for about 15 minutes. Its delivery was only possible by Mujib.

It inspired the 75 million Bangalis of the province to fearlessly and unflinchingly make supreme sacrifices for their freedom. A new country, Bangladesh, was soon to be free.