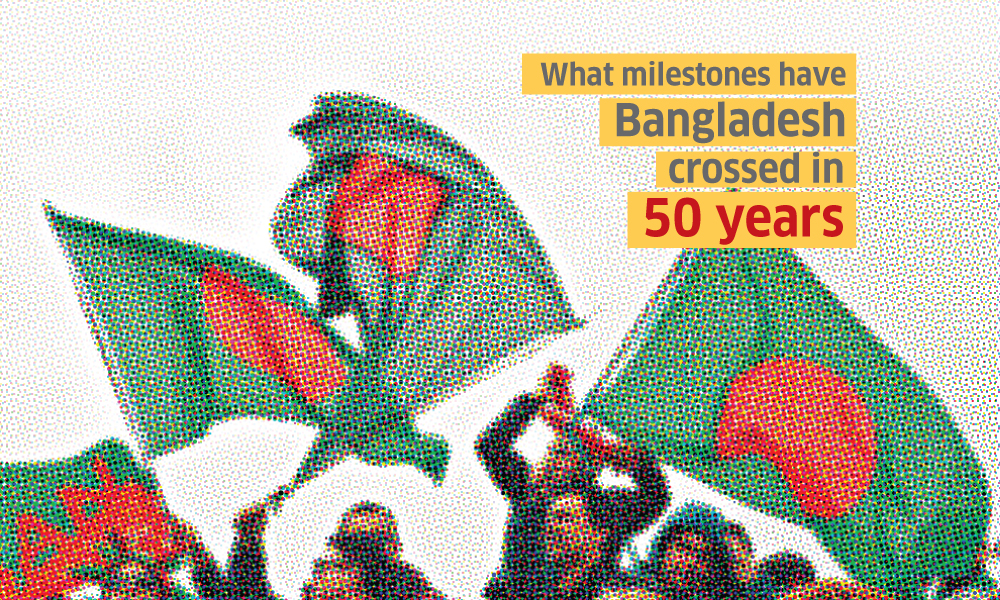 Bangladesh marks 50 years of its independence. The independence was earned through a hard-fought bloody war against Pakistan in 1971. The golden jubilee of independence is the biggest milestone for the nation to celebrate. The country and its people have repeatedly overcome hurdles after hurdles to become a South Asian powerhouse. Today, the country’s economic performance is often defined as the “Bangladesh Surprise.” The United Nations’ announcement of graduating Bangladesh to a “developing country” from a “least-developed country” has added a time-befitting dimension to the milestone celebration. Kudos to the people of Bangladesh!

Bangladesh’s journey in the post-independence period was tough. The task of rehabilitation and reconstruction after independence was overwhelming. The rebuilding process took-off under the stewardship of its founding father Bangabandhu Sheikh Mujibur Rahman. Bangladesh’s development journey was derailed because of turmoil in the form of assassinations, coups, counter-coups and military rule.  The major derailment happened when military dictators grabbed state power and ruled for around 15 years, after the assassination of Bangabandhu Sheikh Mujibur Rahman on August 15, 1975.

Since 2009, the country witnessed an economic turnaround guided by prudent macro-economic and fiscal management. The growth has been inclusive accompanying major socio-economic and human indices. Fifty years into the journey, Bangladesh now is considered as a role-model for other developing countries.

Transforming into a tiger

Bangladesh inherited a war-hit poor economy in 1971. The country started its journey with an empty coffer. Due to two decades of Pakistani colonial exploitation, the economy was stuck in the vicious cycle of poverty. Despite limited resources, Bangladesh has made spectacular economic progress over the last five decades. The GDP growth rate has reached an impressive record level in the latest decade. Per capita income has risen steadily. Its poverty slashing performance is among the best in the world. The country has achieved near self-sufficiency in food production for its 170 million population. The country now even shoulders the burden of the world’s largest refugee population of over 1 million Rohingya fleeing persecution in neighboring Myanmar. It has become an exemplary export powerhouse.

Since independence in 1971, Bangladesh has been consistently improving its economic growth trajectory and significant economic indicators. Bangladesh’s per capita income was $134 when it became independent and in 2020 it reached to $2064.

Economic development achieved over the time, has impacted the social lives of the population positively on many fronts. Share of population below the poverty line had declined from more than 80% in the early 1970s. Inclusive growth policies, firm fiscal management, domestic and overseas employment generation, and broad-arching social security program have resulted in reduction in both moderate and extreme poverty. The poverty rate in 2019 was 20%, extreme poverty was nearing single digit, to 10%. The country will halve its poverty rate by 2030.

Bangladesh became notable in South Asia for its successful export-led development model. Export earnings have heavily contributed to Bangladesh’s economy since the 1980s. Bangladesh’s exports have risen by around 80% in the past decade, driven by the booming garments industry. The total export earnings for FY2018-19 stood at $40.5 billion. Currently, Bangladesh is the second largest global apparel producer. The economy is diversifying. Pharmaceuticals, basic steel, cement, ceramic and various other industries have potential to flourish.

For Bangladesh, both public and private investments have been instrumental to stimulate economic growth. Investment to GDP ratio was 31.6% in FY 2018-19, out of which 23.4% came from the private sector and only 8.13% from the public sector. From 1980s, government of Bangladesh shifted its policy-strategy and open up different sectors for private as well as foreign investment. In recent years, the private sector investment contributed almost 75% of the total investment. In order to increase domestic and foreign investment, the government of Bangladesh has formulated investment friendly policies, acts and laws. It is also focusing on enhancing Public Private Partnership (PPP) programs and building 100 large industrial parks which are being popularized as “Economic Zones.” Other functional areas of investment have been power sector, communication infrastructure and digitization.

Due to internal displacement during the War of Liberation in 1971, Bangladesh’s agricultural sector severely suffered and food production and supply chain faced complete breakdown. In 1972, Bangladesh prioritized agriculture sector and rural economy to ensure food security for its people. In 2021, the country achieved self-sufficiency in food. The agricultural sector recorded gigantic growth in terms of food-grain, fish, poultry, and meat production. In 1972, total food-grain production was 9.9 million metric ton and in 2020 total food-grain production reached 45.4 million metric ton. Bangladesh is the fourth largest rice and third largest freshwater fish producing country in the world.

During 1972–1980, Bangladesh pursued an import-substituting industrialization strategy aiming to safeguard the country’s infant industries. Over recent years, the share of the manufacturing sector in GDP increased from 4% in 1972 to 18% in 2019, and the share of the non-manufacturing industry increased from 2% to 11% during the same period of time. The industrial sector reform in 80s and 90s helped Bangladesh achieve the current level of progress in manufacturing sector. To accelerate the industrial boom, Bangladesh government took an initiative to set up 100 Economic Zones.

Bangladesh has made spectacular progress in human development front over the last five decades. The country has been implementing well-devised plans and channeling resources to enhance access of education. One major success has been the achievement of the goal of universal enrolment at the primary level. A significant decrease in school dropout rate of 18% currently is another milestone. Gender parity was achieved at primary and secondary education ahead of the Millennium Development Goal (MDG) Targets. The country’s literacy rate has risen to 74.7% in 2019 from 26.8% in 1974.

Bangladesh health sector has witnessed a silent revolution in the last five decades. Substantiated with policy interventions, Bangladesh has successfully halved infant mortality and cut maternal mortality rate by 75%. Moreover, the total fertility rate has brought down to 2.04 in 2020 from about 7 in the 1970s. Bangladesh has been applauded as an example of ‘good health at low cost’ in 2011. Vibrant presence of both public and private healthcare interventions, along with NGO interventions, catalyzed the transformation.

Gender parity in Bangladesh has improved across all sectors due to greater participation of women in socio-economic and political activities. Bangladesh has secured the fi­rst position in gender equality among South Asian countries for the second consecutive year at the Gender Gap Index. Bangladesh has closed 73% of its overall gender gap, according to the Global Gender Gap Index 2020. During the period of 1996-2017, the national rate of female labor force increased from 15.8 to 36.3%, which is higher than the South Asian average of 35%.

Bangladesh has the world’s largest river delta system which is vulnerable to climate change. Bangladesh has experienced six major floods and five cyclones since 1970. In the past fifty years, Bangladesh has demonstrated a high level of adaptability in adopting existing technologies to reach out to people. Bangladesh utilized satellite imagery to learn the severity of the storm in 2007. The country has also developed new types of unique cyclone shelters where people can take shelter.

Bangladesh has made immense strides in technology in a number of sectors such as telecommunication, internet connectivity and speed, digitization, and media. The government’s promise of Digital Bangladesh, since 2009, has translated into huge ICT progress.

On May 12, 2018, Bangladesh entered the space era with the successful launching of its first satellite ‘Bangabandhu-1’. With this technological feat, Bangladesh became the 57th nation to have its own satellite in outer space.

Bangladesh received the recommendation on graduation from the least developed country (LDC) status by the UN’s Committee for Development. In February 2021, Bangladesh fulfilled all three criteria to graduate from a LDC to a developing country, for the second time since 2018. The UN would recommend Bangladesh’s graduation by 2026. Bangladesh has been on the list of LDC countries since 1975 when the country’s economy was still recovering from the devastating Liberation War of 1971.

In 2015, Bangladesh became a lower-middle income (LMC) country from being a low-income country, according to the World Bank’s classification of countries. Rising per capita income pushed the country out of the LMC bracket for the first time since its independence in 1971. Bangladesh is aiming for the higher middle-income status by the year 2021.

Bangladesh has been recognized as one of the role-model for emulation for other developing nations in implementing the Millennium Development Goals (MDGs). Bangladesh’s achievements were remarkable in the area of poverty alleviation, food security, primary education, mortality ratio, immunization coverage, and tackling communicable diseases.

Bangladesh was an active participant in formulating the 2030 Global Development Agenda (SDGs). Since the declaration of SDGs, Bangladesh has embraced the SDGs through inclusion of the 17 Global Goals into its National Development Plan. The SDGs have been included in the national plans – such as the 8th Five Year Plan (8FYP), the Delta Plan 2100 and the Perspective Plan 2041.

Fifty-years into its independence, Bangladesh has many milestones to celebrate. The country is now well placed to strive for a poverty free and advanced economy by 2041. The challenges are steep but not insurmountable. Bangladesh already has a strong track record that shows how strong leadership, sound policymaking and determined efforts can take the country forward. The ethos of equity and justice, the underlying principles of the Liberation War, ought to be the guiding principles for crossing the milestones of its upcoming journey.