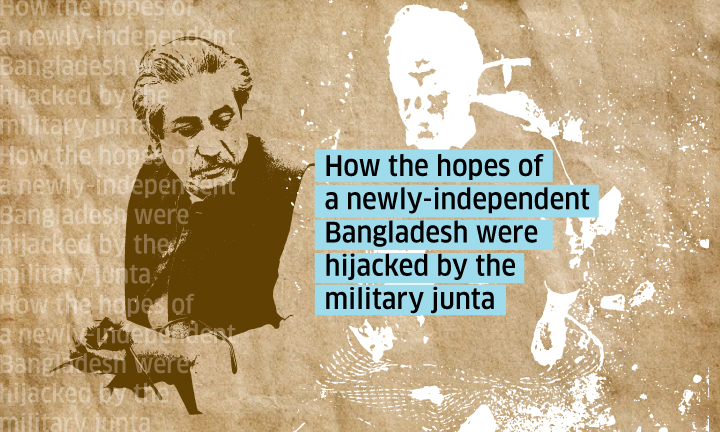 Sheikh Mujibur Rahman was one of the post-colonial leaders who were able to inspire people to make a fresh mark on the world map. In the 1950s and 60s, he led the challenging struggle for a democratic alternative to colonial dominance by the then West Pakistan, and subsequently for the independence of Bangladesh in 1971.

In 1971, the Bengalis rose to Mujib’s call and joined the war of independence against the Pakistan Army. He is the architect of Bangladesh and was fondly referred as Bangabandhu (friend of the Bengalis). He was the first president and the founding father of Bangladesh. He also laid the foundations of the country.

Consistent with Mujib’s progressive vision, pillared to be a secular welfare-state, was incorporated as fundamental state policy. Mujib was one of the unapologetic proponents of secularism in South Asia, which was bearing the wounds of the colonial-era religion-based divide-and-rule policy.

In a short period, post-independence, the Mujib administration did the Herculean job of rehabilitation and rebuilding, formulating long-term development plans and attaining sovereign recognition from the international community during the Cold War era. While continuing the post-war relief and reintegration efforts, his government also focused on setting up a governance framework and a policy making mechanisms in the country.

Mujib arguably faced the most difficult challenges among the world leaders of the time: highest poverty rates, natural disasters, food shortage to famine, and politically-triggered noncooperation by big aid contributors.

In spite of all the backlashes, the nation was turning around with early sign of economic recovery. Mujib could not complete a full term, as his life was cut short by a plotted assassination.

Mujib’s assassination changed the course of politics of Bangladesh, and the ramifications of which are still being felt across South Asia. The plot to assassinate Mujib was strategized by military power ambitious and opportunistic military officers backed by reactionary ideological quarters.

The perpetrators and the vested quarters assumed power and enforced martial law after the assassination-coup. One of the political backers, Khondakar Mostaque, unconstitutionally proclaimed himself as the new president.

Immediately after, a legal provision for immunity for the assassins, which came to be infamously known as the Indemnity Ordinance, was promulgated by the self-proclaimed president. This provision essentially blocked the path for any legal suit, stating that no court can try the assassins and thus, no one can seek justice for the 15 August killings. This also marks the rise of a culture of impunity which later infiltered the governance mechanism and other state institutions.

Subsequently, through a series of coups and counter-coups, General Ziaur Rahman, a senior military officer, who also patronized Mujib’s assassination, seized power in November 1975. Zia became the head of the military junta, the chief martial law administrator (CMLA) on 19 November 1976. Then in April 1977, he elevated himself to presidency. Ascendency of Zia marks the start of military regime that continued for around 15 years.

The Indemnity Ordinance was consolidated into a legislation. Moreover, the junta rewarded Mujib’s killers with lucrative government posts or way out to foreign countries.

Zia turned into an extreme reactionary and authoritarian ruler. He distorted most of the progressive principles the nation stood upon. The first attack was on secularism, which was one of the core pillars of the constitution. Weaponizing religious sentiment was a safe way for Zia to make foothold in politics.

In absence of progressive values, the country was derailed from its development track. As the rulers tilted towards reactionary policies, the country slipped into instability. The period has been thoroughly described as the darkest hours in Bangladesh history.

Zia needed to rewrite history in order to gain legitimacy. He introduced the concept of Bangladeshi nationalism, a state-based identity instead of Mujib’s assertion of a Bengali identity based on language-based nationalism. This move paved the way for future community-based conflicts by isolating many minority communities in Bangladesh.

The junta encouraged growth of the religion-based parties in the politics and allowed such parties to join politics. The previously banned anti-secular parties found their way back in.

The regime also tinkered with the history and rehabilitated the quarters who opposed Bangladesh’s independence in politics and state power. A smear campaign aimed at suppressing facts and distorting history continued for a sustained period.

All the vicious propaganda, the distortion of history, dissipation of false stories to assassinate characters, creation of lies about the Liberation War and freedom fighters were vile attempts at undermining the struggles of the Liberation War. They tried to brush-off Mujib and the leaders of the war-time government out of the history.

The junta censored the media, imposed martial law and used the army to arrest opposition forces. The years of martial law had left most of Bangladesh’s state institutions in a shambles. Hundreds of soldiers as also airmen perished through the many abortive coups against the autocratic president General Ziaur Rahman.

After Zia, another military ruler, Hossain Muhammad Ershad, seized power and ruled the country till 1990. Bangladesh is still grappling with the ramification of the gruesome events of August 1975, and the prolonged military rule.