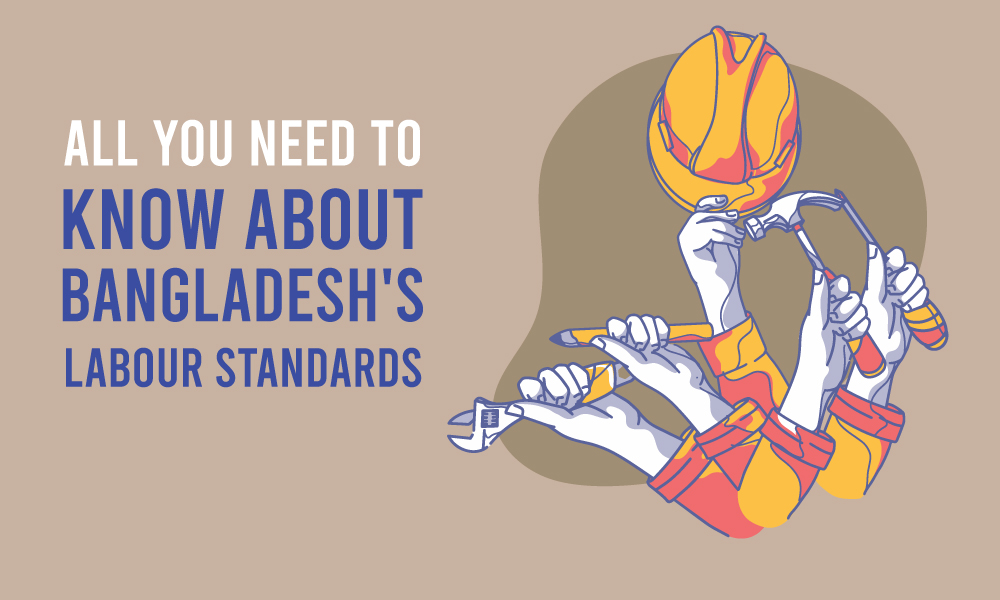 Bangladesh has registered spectacular economic progress over the last five decades. The GDP growth rate reached an impressive record level in the latest decade. The growth has been inclusive with major socio-economic and human indices accompanying the growth. Bangladesh became notable in South Asia for its successful export-led development model. A large and diverse workforce is one of the drivers of the success.

A shift from agriculture to manufacturing and services has resulted in large-scale employment in the formal and informal sectors. There are some four million workers employed in the clothing sector alone. In case of Bangladesh, economic opportunities need to be complemented with decent work environments and labour rights.

Bangladesh’s government has been focusing on decent working environment in industrial establishments, eliminating child labor and creating a skilled workforce. The government, in cooperation with the development partners, is implementing a reform to upgrade the labour right situation in the country.

Following are some policy and institutional measures to ensure workers rights:

International Labour Organization (ILO) Conventions
Bangladesh has ratified all the eight ILO core conventions since the country. Given a progressive agenda, the policymakers have been committed to align the rules and policies with international labour standards.

Labour Law
Bangladesh government has introduced the Bangladesh Labour Rules 2015 on September 15, 2015. The Labour Rules makes it mandatory that the appointment letter must contain certain information such as salary, other financial benefits, applicable rules etc. The rules prescribe certain forms for various register such as service book, labour register, leave register, etc. provide detailed guidelines regarding provident fund. New additions include provisions related to selection of nominee, management of the fund, activities of the trust for managing provident fund.

Labour Policy
Bangladesh formulated its latest ‘Labour Policy’ in 2012. The previous labour policy was formulated in 1980. The principal objective of the policy is to ensure a productive, non-discriminatory, non-exploitative and healthy work environment for all active citizens. The policy is essentially a framework for addressing labour-related issues such as labour rights and welfare. It determines minimum wages and reviews wage-levels. The policy also emphasizes on decent work, workers’ rights, labour dignity and their bargaining abilities.

Ministry of Labour and Employment (MoLE)
MoLE is the focal institution to enforce country’s labour laws. MoLE’s goals are to enforce the labour act and to provide information and advice to employers and workers on how to comply with it.

Department of Factory Inspection
Department of Factory Inspection is responsible for ensuring welfare, safety and health of valuable human resources working in various sectors. By enforcing labour laws of the country, the department facilitates a safe and healthy work culture and improves the quality of wage earner. The Inspector General (IG) enforces the labour act through labor inspections.

Bangladesh Labor Welfare Foundation
Bangladesh Labor Welfare Foundation has been formed in accordance with Article 234 of the Labor Act, 2006 (Amended 2018). The foundation provides grants to the working people for their medical treatment and for the study of their children in public universities and medical colleges. Labourers’ families also get financial assistance from the foundation after their deaths after workplace accidents.

Central Fund
The central fund was set up in 2015 under the Ministry of Labour and Employment in accordance with the provisions of Section 232 (3) of the Bangladesh Labour Act, 2006. The purpose of the fund is to help industrial workers in Bangladesh and is jointly funded by the government and private industry.

Labour Courts
The labor courts are the primary adjudicators of alleged labor law violations. These courts, which are separate from the general judiciary system, have judges known as Chairmen, who are appointed from sitting judges, and two additional Members who are representing workers and employers. There are seven labour courts, and one labour Appellate Tribunal in the country.

Trade Union
Trade union right is respected and protected at the local and national levels in Bangladesh. Registration of trade unions are issued by the Department of Labour.

Let’s Talk with Anne de Henning: Memories of Bangladesh in War and Peace