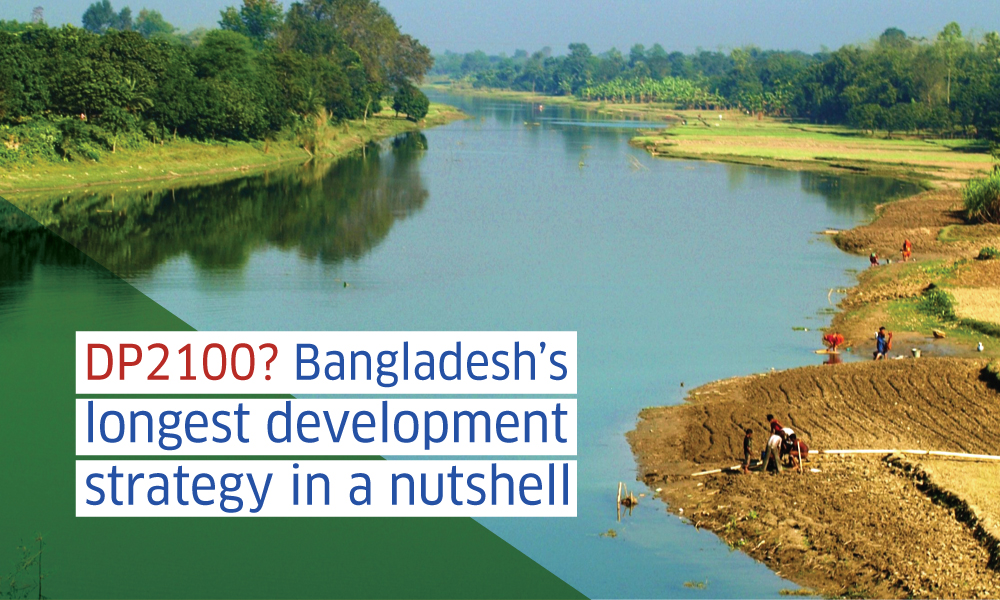 Since its independence in 1971, Bangladesh steadily transformed itself into a model for socioeconomic progress. In the last decade, the country doubled its efforts to graduate out of the low-income country club. A major, and often less-spoken, driver behind this transformation is strategic policymaking.

Since 2009, Bangladesh started formulating long-term strategic plans. These include strategies, programs and projects, which collectively make up the country’s development pathway. The longest envisioned plan which Bangladesh has formulated is called the Delta Plan (DP2100), which sets targets for 2100.

Water management is the core agenda

DP2100 inculcates climate resilience at the core of Bangladesh’s development agenda. As a riverine deltaic land, Bangladesh is rich in water resources. The DP2100 lays out water-centric cross-sectoral actions needed to improve productivity, and minimize disaster risks with focus on economic prosperity.

DP2100 was formed because of Bangladesh’s unique deltaic topography

DP2100’s strategy tools address the hazards posed by the country’s deltaic formation, as well as natural catastrophes and climate change. The plan will also minimize the damage caused by river erosion during flood. Effective implementation of the plan will eliminate extreme poverty, generate employment and sustain growth above 8% until 2041.

4. Conserve wetlands and ecosystems for smart use

6. Achieve integrated use of land and water resources

1. Institutionally, a Delta Governance Council, headed by the Prime Minister, has been setup as the governing agency.

3. A Delta Wing Formation is in the pipeline for the implementation of delta islands. This will be the implementing body in-charge of the overall coordination, and monitoring of the DP2100.

DP2100 Phase-1 has 4 main targets to jumpstart the plan

1. The implementation of DP2100 entails project-based work. In the first phase till 2030, 80 projects will be implemented – 65 on physical infrastructures, 15 on capacity development and R&D.

3. Building surface water reservoirs and retaining rainwater to ensure water availability during the dry season are the two priority areas.

1. Bangladesh plans to setup an investment fund, the “Delta Fund, to finance DP2100.

2. An ‘all-of-above’ fund-generation sources is envisioned. All public, private, domestic and foreign investments are considered.

3. Bangladesh has allocated 1.13% of GDP from 2022 (fiscal year) government’s budget for DP2100. Public financing will be similarly matched in the coming years.