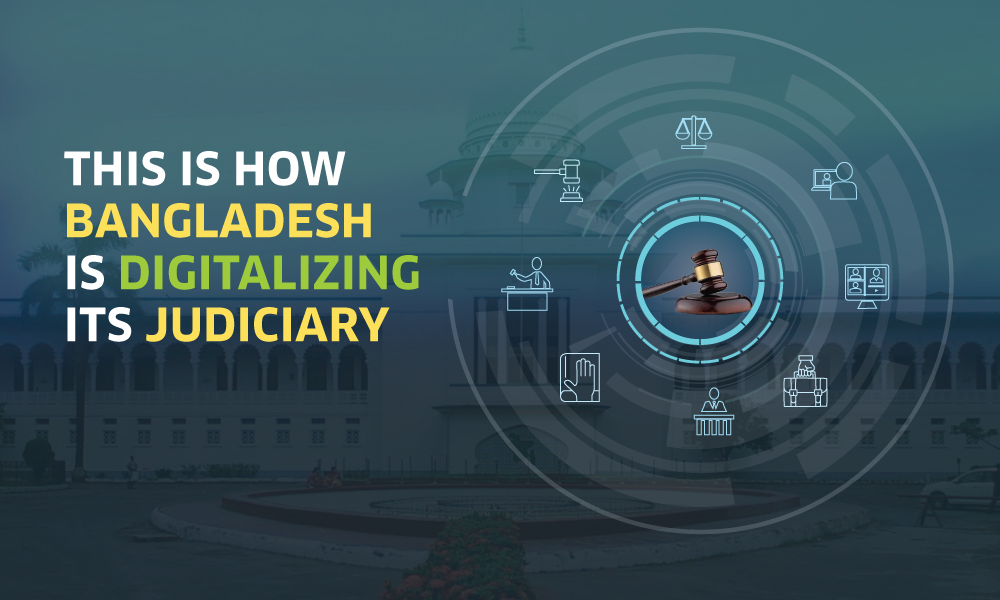 The digitalization of justice system is popularly known as e-judiciary. Bangladesh launched its across-the-board digitalization strategy, ‘Digital Bangladesh,’ in 2009 to translate the long-term development vision into action. The vision, ‘Vision 2021’, was to make Bangladesh a middle-income country by 2021—the year the country celebrated its golden jubilee of independence.

As part of the strategy, the government launched an ‘e-governance’ initiative in almost every organ within it. The core purpose was to enhance access to justice and streamline the judiciary. In other words, Bangladesh decided to infuse tech in the judiciary system.

Bangladesh’s judicial system has long needed an upgrade. It descended from colonial era, and procedures were archaic. With a view to move away from antiquated procedures, more cutting-edge, digital techniques were adopted. In Bangladesh, the digitalization of courts started in 2009. The aim was to remove the backlog of cases, make the justice process swift and keep abreast with the fast-moving world.

The service process simplification (SPS) initiative was the first step of justice process digitalization. It is a long process. Digitalization of justice system involves digitizing the court records, processes and documents – both hand-written and computer composed. The target is to fully operationalize an e-judiciary by 2023.

1. Developed a web portal for all districts, along with 5 major ‘metropolitan’ criminal courts
2. Bail orders are accessed via newly formed ‘Bail Confirmation Online Manual’
3. A socialized cyber tribunal has been established
4. 3 aiding apps launched: Online Cause List, Judicial Monitoring Dashboard, and My Court
5. A platform www.judiciary.org.bd has been launched with all the judicial service-related information
6. Summary of pending cases are on the Supreme Court’s website
7. Case-updates are delivered using display boards and push-messages

Covid-19 pandemic accelerated the justice-system digitalization. Bangladesh started conducting judicial proceedings through ‘virtual courts’ in May 2020. The advent of virtual courts ushered a new era for the nation’s judicial system. On 9 May, 2020, a presidential decree named “Use of Information and Communication Technology by Courts Ordinance 2020” came out. For Bangladesh, it was a revolutionary initiative allowing the justice system to use virtual means for the first time. In less than 2 months, the decree was enacted in to a law by the parliament. In two phases, there were 369,732 appeals in the virtual courts and among them 178,520 bails granted online.

1. 75,000 lawyers will be trained
2. 2,000 courtrooms will be digitized
3. A four-tier data center will be set up in the Supreme Court
4. Audio recording pool, virtual terminals and camera trial systems in the central jail
5. A secured video conferencing app “Boithok” will be used for privacy protection