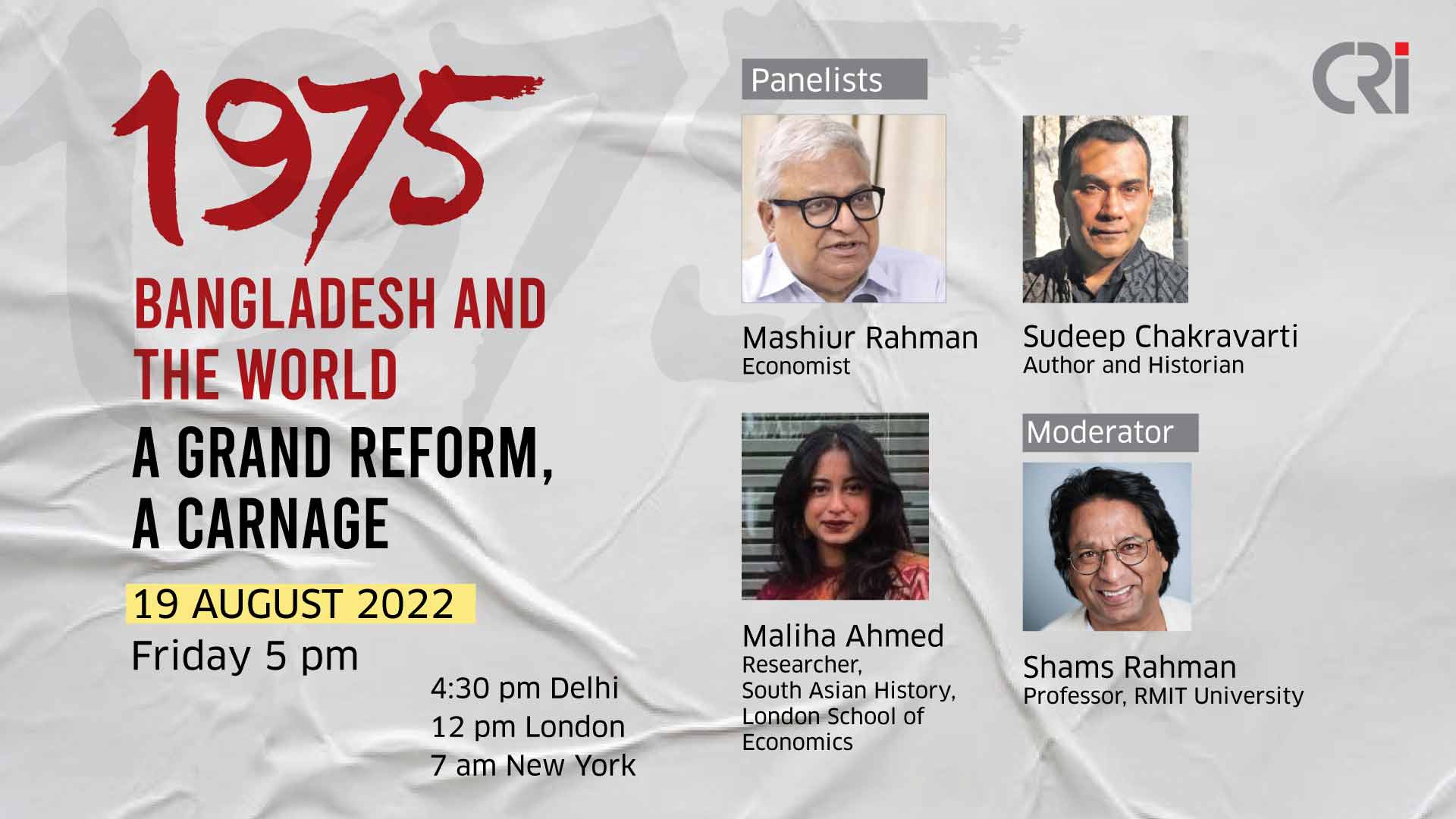 Centre for Research and Information (CRI) hosted a webinar called “1975 Bangladesh and the World: A Grand Reform, A Carnage” on 19 August 2022. The webinar was part of a series where CRI brings evidence-based analysis regarding ramifications of ‘1975 Bangladesh,’ when Bangabandhu Sheikh Mujibur Rahman, the president of Bangladesh, along with many in leadership of his administration, were assassinated.

Economist Mashiur Rahman, author and historian Sudeep Chakravarti and researcher Maliha Ahmed joined as panelists. The webinar was moderated by Professor Shams Rahman, RMIT University, Australia. The discussion covered topics including geo-political situation in early 1970s globally and in post-war Bangladesh, Mujib’s socio-economic reform agenda, the diplomatic efforts for Bangladesh’s recognition and the historical forces that led to the assassinations.

The discussants noted the challenges of a new country, which was arguably the poorest in the world and was completed destroyed by war. On the political end, the progressives-secular visions for a new Bangladesh were also disrupted.

Mashiur Rahman discussed Bangabandhu’s policies to rebuild the country’s economy following the devastating war, as well as his smart efforts to ink loan deals with the IMF and World Bank. He also said, pre-war Pakistan era beneficiaries tried to undermine all the work of the post-independence government.Sudeep Chakraborty talked about the historical trends, especially from late 1960s political events, that contributed to the challenges for a newly independent Bangladesh. He spoke about Bangabandhu’s focus on secularism, how he turned to a secular-progressive vision from a religion-based one. He mentioned that the relevance of that vision is still prevalent in Bangladesh’s socio-politics.

Maliha Ahmed recounted Mujib-administration’s diplomatic efforts to gain recognition for Bangladesh. “The big countries like the UK, USA and China were holding their recognition. Pakistan didn’t give recognition to Bangladesh until 1974. All of these were big roadblocks for Bangladesh to enter the UN,” she said while mentioning about the challenges.

The webinar was live streamed on the social media outlets of CRI, and print and electronic media.

The Daily Star: After Bangabandhu’s assassination, attempts were made to destroy Liberation War spirit, secularism: Academics

Dhaka Tribune: ‘Zia tried to undo all of Bangabandhu’s work’