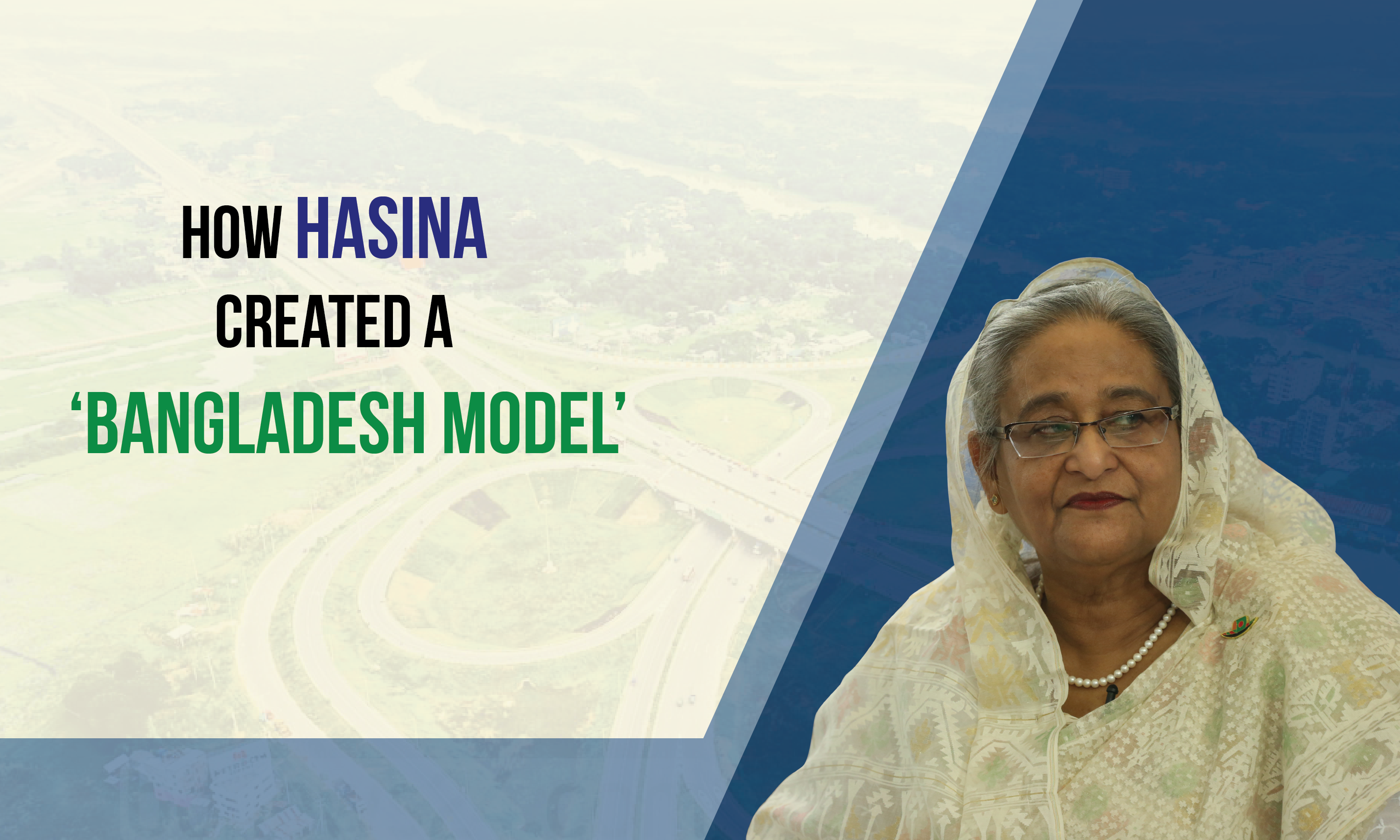 Sheikh Hasina is the longest serving prime minister of Bangladesh. She has served the country for 4 terms, now completing her fourth, for close-to 20 years. Her tenure changed the course of the post-colonial country because under her the country reached a point of stability whereby it picked up a decadal record of growth momentum, which has also been inclusive. She is among the most experienced South Asian leaders, and has patiently professed inclusive politics for more than 40 years.

Hasina’s is a continuum of the legacy of Bangabandhu Sheikh Mujibur Rahman, who led a post-independence war-ravaged Bangladesh in 1972. This advocated agenda is of progressivism, which has been locally termed as ‘leaving no one behind’ policy – similar to the moto of United Nations’ development goals. After tragically losing her father at a young age, Hasina became an activist, then a full-fledged politician leading a combined opposition against a military junta to an experienced statesman – all in an ever-changing world.

In 2009, Hasina administration, for the first time, changed the course of policymaking in Bangladesh by focusing on long-term planning rather than just firefighting. This is a tough call for any developing country with low-income levels. The bet paid off, in less than 15 years, Bangladesh’s income level tripled surpassing its other big South Asian neighbors, and the economy reached growth momentum which has persistently been among the top 10 in the world.

In Bangladesh, Hasina has come to be known for her people-centric polices. It is because she is among the very few political figures who have travelled to every corner of the country. Unknown to many, Hasina is an avid reader – especially of any publication that relates to policymaking or statecraft.

Hasina’s few mention-worthy policies are Vision 2021, Digital Bangladesh, Delta Plan, Vision 2041 and Social Security Strategy. Just like any risk-taking politician, she picked her priorities. Infrastructure and energy sector investment was among the top ones. She drew a fine line between the political noises and the development agenda. Simply put, all her policies are interconnected, and the idea being that policymaking has to be visionary and long-term.

For example, the Delta Plan is almost a century-long multisectoral document which prioritizes climate change in all fiscal decisions of the country. As a low-lying country climate change is the main risk to Bangladesh’s development. Similarly, Vision 2021 was formulated to bring Bangladesh to a mid-income-level, but it was twined with across-the-board digitalization of an archaic governance system and e-connectivity of largely rural economy. Similarly, the Vision 2041, has a sole agenda of making Bangladesh an advanced high-income economy.

These policies need to be understood within a context. When Hasina administration took over, Bangladesh faced some deeply trenched problems, some of which were unique but some were also common with other developing countries. Among the top problems enlisted by Bangladesh-observers and development partners (such as the World Bank) were political instability, infrastructure bottleneck, energy/power inadequacy, low income-levels and digital dysconnectivity.

Hasina’s policies slashed poverty at a record pace. In 2015, Bangladesh became a lower-middle income (LMC) country from being a low-income country, according to the World Bank’s classification. In 2021, Bangladesh was set to graduate from a least developed country (LDC) to a developing country stipulated under the United Nations’ criteria.

Hasina administration’s rigor to turn around Bangladesh’s economy often get headlines across the globe. Afterall, who wouldn’t want to know about a success story from the global South! What gets less attention is her priortisation of agriculture. Hasina proactively made Bangladesh a food-secure country from a food-aid dependent one. This has been nothing less than a silent revolution. Even 30 years ago, cyclical famines were prevalent in Bangladesh. Agriculture was synonymous to poverty. Hasina took a bold decision to intervene. Her administration invested in research!

It is said that farmers are dear to Hasina, and decisions on agriculture sector always get a fast-track. What Hasina administration did was to invest in agriculture related research, especially in publicly-funded research institutes and universities. Parallelly, she has continued to subsidize agriculture, while subsidies were fading out from other sectors.

Hasina understood that Bangladesh is the most crowded country in the world (other than city-states). Farming land is bound to shrink. The only way out is productivity and efficiency. Hasina is often seen in the media calling upon average Bangladeshis to ‘farm anything they can, and not leave an inch of land empty.’ A clear example of policy priority translated into political rhetoric. Her calls have impact. By 2021, Bangladesh was among the top 10 producers of rice, fish and certain vegetables.

Hasina has her critics and faces scrutiny without any miss. She is a shrewd policymaker, but she has also made her mistakes during her tenure. What is important: she listens to her critics while sticking to her vision. What she has done is created a ‘Bangladesh model’ for development, which researchers are yet to dissect.